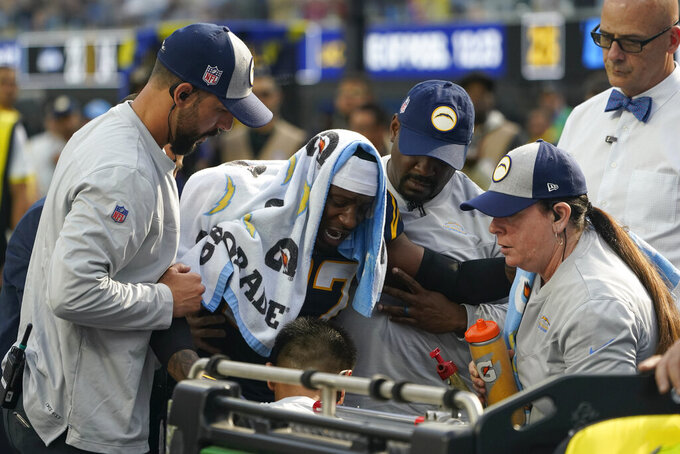 Los Angeles Chargers cornerback J.C. Jackson (27) reacts to an injury during the first half of an NFL football game against the Seattle Seahawks Sunday, Oct. 23, 2022, in Inglewood, Calif. (AP Photo/Marcio Jose Sanchez)

COSTA MESA, Calif. (AP) — JC Jackson was placed on injured reserve by the Los Angeles Chargers after he underwent surgery for a ruptured patellar tendon in his right knee on Wednesday.

Jackson’s knee appeared to give out as he was attempting to elevate while contesting a touchdown catch by Seattle’s Marquise Goodwin during the second quarter of the Seahawks' 37-23 victory last Sunday. Jackson was left clutching his knee on the turf and was down for several minutes while being tended to by trainers.

Attaochu is in his second stint with the Chargers. He was a second-round selection in 2014 and played four seasons. His best year in the league was 2015 when he had 52 tackles and six sacks.

Attaochu was on Baltimore's practice squad most of this season and appeared in one game before being released. He has also played for the New York Jets, Denver and Chicago.