Chargers place Melvin Gordon on did not report list 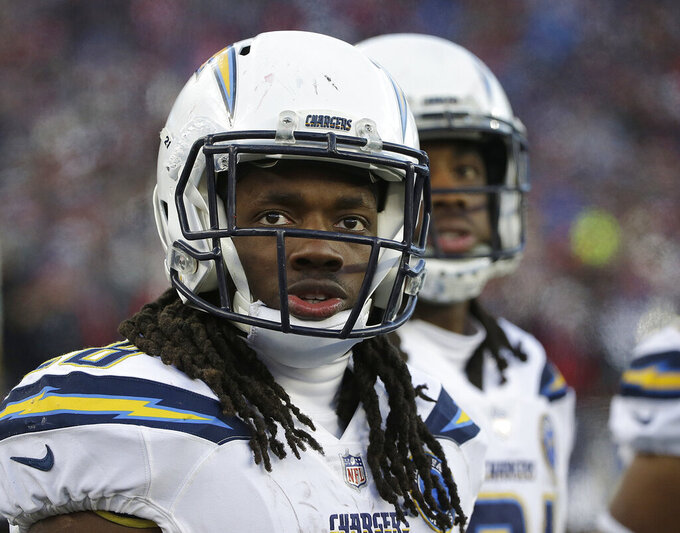 FILE - In this Jan. 13, 2019 file photo Los Angeles Chargers running back Melvin Gordon watches from the sideline during the second half of an NFL divisional playoff football game against the New England Patriots in Foxborough, Mass. Gordon is officially a holdout as the Chargers get ready to begin training camp. The team placed their running back on the reserve/did not report list Wednesday, July 24, 2019 as players went through physicals and meetings. Gordon is going into the final year of a rookie contract and will earn $5.6 million this season. (AP Photo/Steven Senne)

The Chargers placed the running back on the reserve/did not report list Wednesday as players went through physicals and meetings. Gordon is going into the final year of a rookie contract and will earn $5.6 million this season.

"I can see his thought process but he's not here," general manager Tom Telesco told reporters. "I'm not naive. I know we are better with Melvin but we have a strong running back group."

Gordon's agent informed the team earlier this month that the fifth-year running back would hold out unless he got a contract extension. Gordon said at SportsCon in Dallas on July 13 that he is looking to take advantage of his opportunities.

"You know, I want to get paid. That's just kind of what it is. Hopefully, I end up a Charger. That's the goal. I want to end up with the Chargers," he said.

Telesco said the team has made an offer to Gordon's camp.

Austin Ekeler, Justin Jackson and Detrez Newsome will pick up the slack during Gordon's absence. Ekeler was a good change-of-pace back for the Chargers last season while Jackson and Newsome had some production in limited opportunities.