Chargers place Pouncey on IR; center will have hip surgery 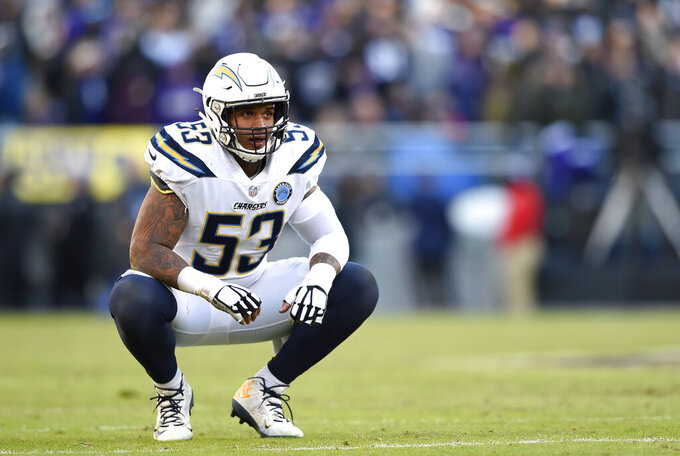 FILE - In this Jan. 6, 2019, file photo, Los Angeles Chargers center Mike Pouncey kneels on the field during the second half of the team's NFL wild card playoff football game against the Baltimore Ravens in Baltimore. Pouncey has been placed on injured reserve and will miss the season because of a hip injury. General manager Tom Telesco said Thursday, Sept. 17, 2020, that Pouncey will undergo surgery before the end of the month. (AP Photo/Gail Burton, File)

COSTA MESA, Calif. (AP) — Los Angeles Chargers center Mike Pouncey has been placed on injured reserve and will miss the season because of a hip injury.

General manager Tom Telesco said Thursday that Pouncey will undergo surgery before the end of the month.

Pouncey is in his 10th season and is in the final year of his contract. He played in only five games last year before suffering a season-ending knee injury. He was released by the Miami Dolphins in 2018 before signing with the Chargers. He was a Pro Bowl selection for the fourth time in his career in his first season in LA.

“On top of being a Pro Bowl talent, he’s the ultimate captain, teammate and competitor. Quite simply, he’s one of the best leaders I’ve ever been around," Telesco said. "I’m happy he’ll remain around the team throughout the season, and all of us wish Mike a successful procedure and speedy recovery.”

The 31-year old Pouncey missed most of 2016 with the Dolphins because of hip issues. He has had surgery on both hips in recent years as well as stem cell therapy. He told Miami reporters in 2017 that doctors expected him to need hip replacement surgery in five to 10 years.

Pouncey becomes the second significant Chargers starter to be lost for the season. Safety Derwin James suffered a tear to his right meniscus during training camp.

Fullback Gabe Nabers has been promoted from the practice squad. He saw time on offense and special teams during last week's win at Cincinnati after being elevated to the active roster before the game.