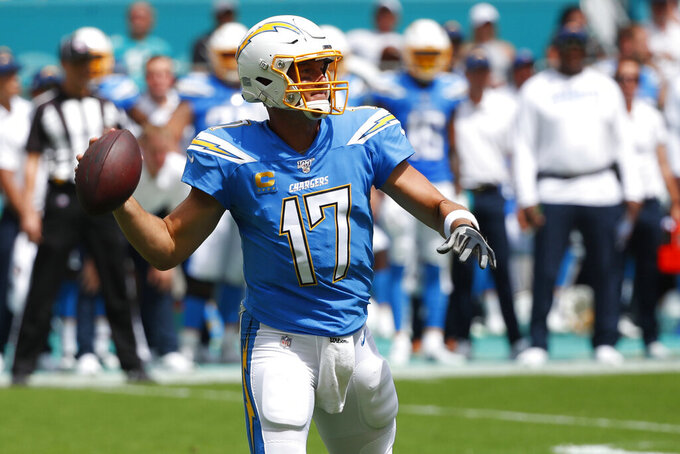 Los Angeles Chargers quarterback Philip Rivers (17) looks to pass the ball, during the first half at an NFL football game against the Miami Dolphins, Sunday, Sept. 29, 2019, in Miami Gardens, Fla. AP Photo/Wilfredo Lee)

COSTA MESA, Calif. (AP) — The Los Angeles Chargers were missing four offensive starters for Sunday's game at Miami, but as long as Philip Rivers is under center, it doesn't seem to matter.

Despite two of his top three receivers being sidelined, Rivers posted his fourth game since the start of last season where he has completed 80% or more of his passes in a 30-10 victory over the Dolphins. That's tied with New Orleans' Drew Brees for most in the league during that span.

"Just so many guys contributed," said Rivers, who was 24 of 30 for 310 yards and a pair of touchdowns. "Obviously they did all they could to take Keenan (Allen) out of the game and he still found ways to make plays. But you look at Andre Patton contributing with catches, Geremy Davis getting catches, Dontrelle Inman had a heck of a day. Lance Kendricks wasn't even here 10 days ago and he's making third-down plays for us."

Inman, who was signed late in the preseason after playing for the Chargers from 2014 to '17, led Los Angeles with five receptions for 76 yards while Davis, Patton and Kendricks had two catches apiece.

Troymaine Pope, who was pressed into duty because of Justin Jackson's calf injury, touched the ball 12 times and had a 13-yard TD reception.

Rivers' targets were different but the passing distribution was the nearly identical to the three games last year where he had a completion percentage of 80% or better. The only difference was that he was 8 of 10 for 130 yards on intermediate routes (11-20 yards), whereas in other games he had five to seven attempts on those routes.

"Philip is an excellent QB but those other guys stepped up. I think it is going to make us a better team in the long run," coach Anthony Lynn said. "The more these guys get meaningful snaps early with guys coming back healthy will help us late in the season."

Lynn used a two-tailback package with Pope and Austin Ekeler for nine plays and averaged over 11 yards. During the first three weeks, Ekeler and Jackson were on the field at the same time for only two plays.

With Melvin Gordon expected to see his first action this week, the Chargers could again be using a two-tailback set in certain situations.

"If teams to go nickel or something else like that on pass plays, the shorter receivers come in handy," Lynn said.

Communication in the secondary. Los Angeles has allowed four TD passes of 30 yards or more in the past three games, including Josh Rosen's 34-yard scoring strike to a wide-open Devonte Parker midway through the first quarter to give Miami a 7-3 lead. Lynn said cornerback Desmond King could have stayed with Parker longer on the wheel route before someone else was supposed to pick him up.

Allen leads the league in receiving yards (452) and is tied for the top spot in receptions with 34. Both marks are the most through four games by a receiver in Chargers history.

Roderic Teamer's learning curve continues. The undrafted rookie has been elevated to starter at strong safety because of injuries to Derwin James and Adrian Phillips but has struggled. He didn't have good position on a screen pass caught by Miami running back Kenyan Drake and was blocked as Drake had a 19-yard gain into Chargers territory. The drive resulted in a field goal for Miami.

Tight end Sean Culkin is lost for the season with a torn Achilles. Kendricks is the only healthy tight end on the roster, which means Stephen Anderson could be called up from the practice squad.

There was no update on defensive end Melvin Ingram's hamstring injury. Linebacker Denzel Perryman was cleared after being evaluated for a concussion.

1 — Out of the 46 players active for the Chargers, only one did not see the field. That was Gordon, who ended his holdout on Sept. 26 and was added to the roster on Saturday after Jackson's injury. Lynn said Gordon would be used in only an emergency.

Gordon will get a full week of practice before the Chargers (2-2) host the winless Denver Broncos on Sunday. The big question throughout the week will be if wide receivers Mike Williams (back) and Travis Benjamin (knee) are able to return as well as kicker Michael Badgley.