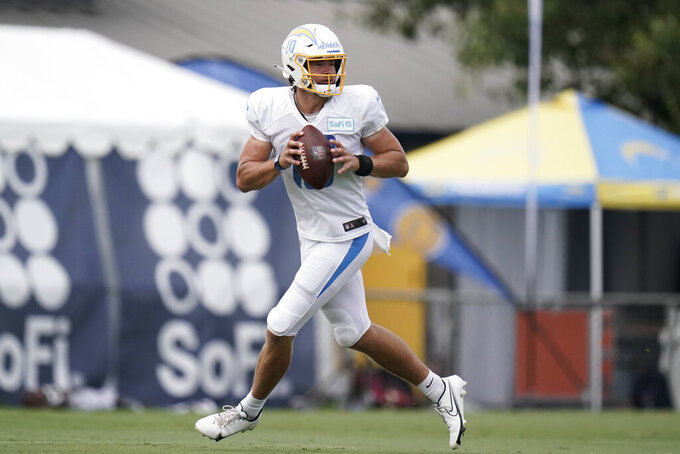 COSTA MESA, Calif. (AP) — Justin Herbert gets his first look at SoFi Stadium on Thursday when the Los Angeles Chargers hold their first scrimmage. When he will get his first NFL start will take a little more time.

The rookie quarterback has received positive reviews from coaches and teammates for how he has tried to quickly get up to speed with the offense. However, he won't be asked to start immediately with Tyrod Taylor on the roster.

“The transition has been really good. I'm just trying to do my best to absorb as much as I can, go out there and have fun,” Herbert said.

Herbert went sixth overall in April's draft after starting 42 games for Oregon over four seasons with 10,541 yards passing and 108 total touchdowns. Last season, he led the Ducks to a Pac-12 championship and a victory in the Rose Bowl.

He is the fourth Oregon quarterback to be selected in the top 10 since 1999.

Herbert's biggest adjustments are to the speed of the game and also trying to learn all the protection schemes the Chargers use. That is commonplace for rookie QB's entering the league, but the learning curve is steeper this season without offseason team training sessions and preseason games due to the coronavirus pandemic.

Herbert said he worked on five- and seven-step dropbacks along with refining throws on hitch-and-go routes. Improving on dropbacks has been crucial because he rarely lined up under center at Oregon.

Taylor is tasked with mentoring a rookie for the second time in three years (he did the same in 2018 in Cleveland with Baker Mayfield) and has been pleased with Herbert's progress so far.

“He’s out there making plays,” he said. “There’s still a learning curve, a learning process like every young player in this league. But he’s doing his best. He’s going out there and making plays.”

Coach Anthony Lynn thought things were coming too easy for Herbert early in camp. But he has dialed things up over the past week and seen him struggle a bit, which the fourth-year coach thought was important in order to get Herbert out of his comfort zone.

"It’s good for him to be uncomfortable. As long as he’s uncomfortable and we don’t break his spirit, I think that’s an opportunity for great growth,” Lynn said.

Defensive coordinator Gus Bradley has also been impressed with Herbert's demeanor, especially when it comes to breaking down plays.

Bradley though did agree that the lack of preseason games will prevent the Chargers from seeing how much Herbert has learned and if he can quickly take over the team. Bradley made a comparison to 2012, when he was the defensive coordinator at Seattle, and he saw Russell Wilson take control of the job during preseason games.

“I thought he has a certain poise about him. I thought he does some things that are just natural,” Bradley said. “Some of the things we look at quarterbacks are, you know, timing, accuracy, decision making. He seemed to jump out at some of those things. He’s got a lot of experience playing. And so now it’s just getting used to the speed of the game.”

Even though no one knows when Herbert will get his first snaps in an NFL game, he said the biggest thing that he has learned from Taylor and the coaches so far is that not all the pressure will be on him when it happens.