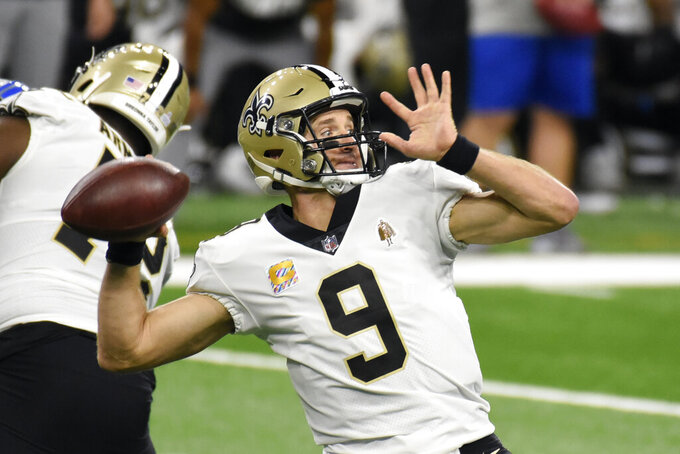 NEW ORLEANS (AP) — For perhaps the final time, Saints record-setting quarterback Drew Brees is about to look across the line of scrimmage at uniforms emblazoned with the lightning bolt logo of the team that drafted him.

The Chargers (1-3), who visit New Orleans (2-2) on Monday night, essentially cut Brees loose by offering him a low-risk, incentive-laden contract extension on the heels of the quarterback’s shoulder injury at the end of the 2005 season. To Brees, a 2001 second-round draft pick out of Purdue, the offer was a flippant invitation to shop around for something else.

New Orleans stepped in with a six-year, $60 million offer — a deal that in retrospect looks like one of the greatest free-agent signings in NFL history for Saints general manager Mickey Loomis and coach Sean Payton.

What has happened in the 14-plus seasons since can only leave the Chargers and their fans to wonder what might have been if more of an effort had been made to retain Brees.

“When I was drafted by the Chargers back in ’01, it was my hope, my plan, to be the franchise quarterback there for my whole career,” Brees said this week.

But Brees, now 41 and in his 20th season, has no reason to dwell on how things could have played out had he remained in Southern California. His synergy with Payton has produced some of the most prolific offensive football the NFL has ever seen. Brees won a Super Bowl and became the all-time leader in completions (6,959), yards (78,442) and touchdowns (555) in league history.

And the civic-minded Brees also was able to take satisfaction from accomplishing such feats — and focusing charitable efforts — in a football-loving community as it rebuilt from widespread destruction cause by Hurricane Katrina less than a year before he arrived.

Not that Brees, while looking for a new club, had necessarily envisioned himself moving to a community that was a picture of devastation and playing under a then-rookie coach for a team coming off a 3-13 campaign.

“There was some divine intervention there, I believe, and it brought me here to, probably then, one of the last places that I ever thought I would end up — in New Orleans and with the Saints,” Brees recalled. “And yet, when you look at the last 15 years, here with Sean Payton, and so many others, that’s the way it was supposed to be.”

In Brees’ previous 14 seasons with the Saints, they have advanced to the playoffs eight times, including three trips to the NFC championship.

New Orleans led the NFL in total offense six times, finished in the top five in five other seasons, and has never ranked worse than ninth during that span.

Younger players in New Orleans, such as fourth-year running back Alvin Kamara, see Brees as synonymous with the Saints and hardly remember his stint with the Chargers, who were then based in San Diego.

“Everybody knows Drew Brees for the Saints. Watching him was amazing, but playing with him, like, you see why he’s as decorated and talked about as he is,” Kamara said.

Even as a pro who this season went through a protracted contract negotiation himself, Kamara wondered how another club could have given up on Brees.

Brees has played against the Chargers three times since moving to New Orleans. The Saints have won all three meetings.

This time will be a bit different because the quarterback who replaced Brees with the Chargers in 2006, Philip Rivers, is gone, having signed with Indianapolis. Now the Chargers have a rookie quarterback in Justin Herbert, who was 7 years old when Brees played his last game for the franchise.

Not one active Chargers player was in the NFL when Brees moved to New Orleans. The coaching staff and front office are different. And in 2017, the team moved a couple of hours north to Los Angeles.

Still, Brees won't deny there's a sentimental element to playing against the Chargers.