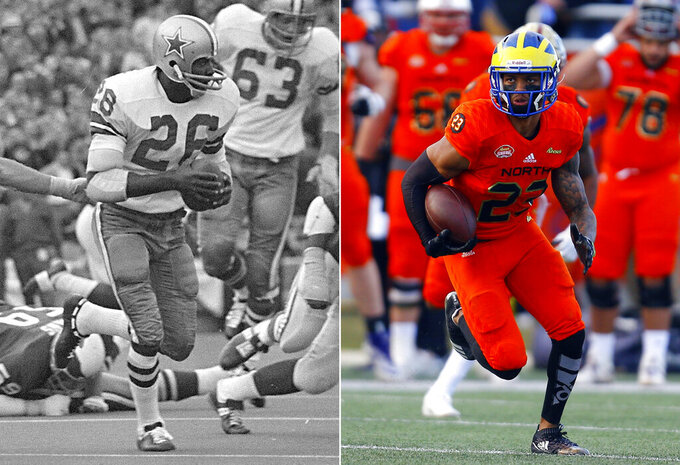 FILE - At left, in a Nov. 1, 1970, file photo, Dallas Cowboys cornerback Herb Adderley (26) intercepts a Philadelphia Eagles pass in the fourth quarter of a football game, in Dallas. At right, in a Jan. 26, 2019, file photo, North safety Nasir Adderley, of Delaware, returns an interception during the second half of the Senior Bowl college football game, in Mobile, Ala. University of Delaware safety Nasir Adderley was in high school when he connected with his grandfather's first cousin, Hall of Fame defensive back Herb Adderley, who sent him videos of his playing days during the Vince Lombardi era in Green Bay. The elder Adderley would become a huge influence in his life as Nassir lost his grandfather, then blossomed into an NFL prospect himself. (AP Photo/File)

Los Angeles came into the draft with their two biggest needs being defensive tackle and safety, which it was able to fill in the first two rounds with Notre Dame defensive tackle Jerry Tillery and Adderley.

"The draft has kind of gone as advertised," general manager Tom Telesco said. "I can't complain. It has been pretty good so far."

Adderley was considered by many to be the highest-ranked safety in this year's draft class but was the fourth one to come off the board. That was just fine for Telesco, who had Adderley in for a pre-draft visit.

"All I was telling people after my visit was how it was a perfect fit and how I enjoyed my meetings with the coaching staff," Adderley said.

James made an instant impact last season at strong safety and was an All-Pro selection. The Chargers did not have a true free safety last season.

Jahleel Addae started all 18 games at free safety last season but was released before free agency started. The biggest reason the Chargers released him was that he was better suited as a strong safety.

Rayshawn Jenkins and Jaylen Watkins also can play free safety, but both are unproven.

"The free safety spot is wide open. The starter is no longer here," Telesco said. "Nasir was a player that we really coveted. His range is excellent and he has a good combination of foot speed and instincts."

Adderley was a four-year starter at Delaware. He had 87 tackles last season along with four interceptions and seven passes defensed. He played cornerback his first two seasons before switching to free safety.

"Once I went to free safety, everything started clicking," he said. "I think I add physicality and competitiveness."

Adderley, who had 11 interceptions during his college career, is the highest-drafted player from Delaware since Joe Flacco went 18th overall to Baltimore in 2008. The Blue Hens have had three players drafted since Flacco, but one went in the fourth round and the other two were selected in the fifth round.

Adderley is the cousin of Pro Football Hall of Famer Herb Adderley, who won three Super Bowl titles with the Green Bay Packers and Dallas Cowboys.

"He helped me tremendously by being a positive role model. I don't know where I would be without him," Nasir Adderley said.

Pipkins is only the second player from Division II Sioux Falls to be drafted. The first was punter Brian Hansen, whom New Orleans took in the ninth round in 1984.

Despite coming from a small school, Pipkins played in the East-West Shrine Game and was invited to the scouting combine. He was interviewed by Telesco and the coaching staff during the combine.

"I had heard a lot of fourth-round stuff. I was kind of expecting tomorrow," said Pipkins. "My agent had said — because a lot of teams had fourth round on me — if somebody really wants me that they would have to take me in the third round."

Pipkins started at left tackle his final three years at Sioux Falls and Telesco said he has the traits to be a left tackle in the NFL.

"There are some players at Division II and Division III who can dominate but not have enough athletic traits to play at this level," Telesco said. "He has NFL size and feet. There's a lot to work with."

Los Angeles goes into the draft's final day on Saturday still looking to build depth at linebacker and the offensive line.