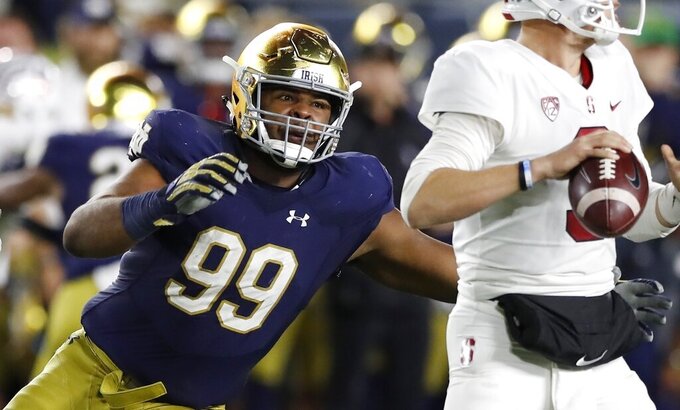 COSTA MESA, Calif. (AP) — The Los Angeles Chargers were able to address one of their biggest needs during the first round of Thursday's draft by selecting Notre Dame defensive tackle Jerry Tillery with the 28th overall pick.

The Chargers have one of the best defensive end combinations in the league with Joey Bosa and Melvin Ingram, but depth at defensive tackle has taken a hit during the offseason. They released Corey Liuget prior to the start of free agency while Darius Philon and Damion Square departed as unrestricted free agents.

"His inside pass rush ability is what stood out from the tape," general manager Tom Telesco said. "He runs very well for a big guy. He has size, length and is very flexible."

The 6-foot-7, 305-pound Tillery was a second-team selection to The Associated Press All-America team after leading the Fighting Irish in sacks (eight) and forced fumbles (three). He had 30 tackles, including 10½ for loss, and five quarterback hurries to help lead Notre Dame to the College Football Playoff semifinals.

Tillery's selection not only provides depth, but gives the Chargers an athletic pass rusher up the middle who could challenge for a starting spot. He joins a defensive tackle group that includes 13-year veteran Brandon Mebane and Justin Jones, who was drafted in the third round last year.

Tillery played in 50 games with 35 starts during his collegiate career and recorded 13½ sacks. The Chargers were one of his pre-draft visits.

"I knew they were interested but I tried to approach each visit the same," Tillery said. "I think with my size, length and athletic ability, I put them to good use to become a great technician in my pass rush ability and also using my leverage to stop the run."

Tillery's best game last season came on Sept. 29 against Stanford when he had four sacks and a forced fumble. He played most of last season with a torn labrum in his right shoulder and had surgery in March. Tillery said he had a checkup with his surgeon last week and that he is on schedule to be cleared for contact by the start of training camp in late July.

Tillery could also be utilized on special teams after he blocked two kicks last season.

This is the third time in the past four years that Telesco has taken a defensive player in the first round. He selected Bosa with the third overall pick in 2016 and took safety Derwin James 17th overall last year. Telesco said he did not receive many offers to trade out of the pick, and that Tillery was the only player remaining on their board with a first-round grade.

"He is a solid first-round player. You don't always get that at 28," Telesco said. "I was fine to take a guy on our board at the top or middle of the second round if we couldn't trade out. It worked out that Jerry was there."

The Chargers still have needs at linebacker, free safety and guard, which they are expected to address on Friday and Saturday.