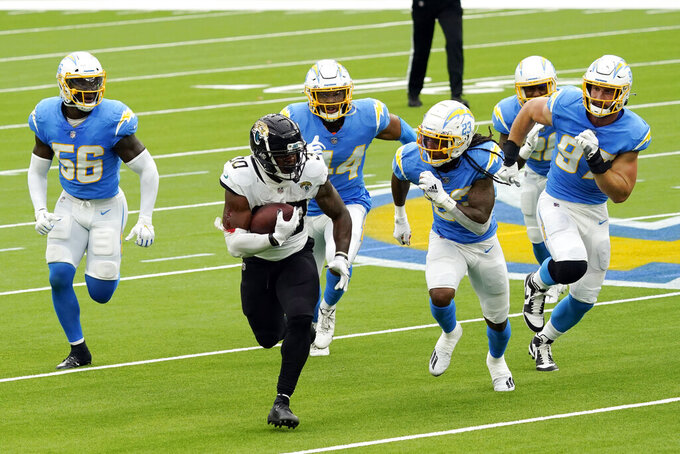 Jacksonville Jaguars running back James Robinson runs against the Los Angeles Chargers during the first half of an NFL football game Sunday, Oct. 25, 2020, in Inglewood, Calif. (AP Photo/Alex Gallardo)

COSTA MESA, Calif. (AP) — Anthony Lynn and the Los Angeles Chargers accomplished their main goal of snapping a four-game losing streak. They still have many things to fix to turn around their season.

Los Angeles is 2-4 after a 39-29 victory over the Jacksonville Jaguars on Sunday, but it squandered a double-digit lead for the fourth time in five games and had plenty of lapses in all three phases to test Lynn's patience.

The Chargers did not allow a first down on Jacksonville's first four drives before penalties, missed tackles and a blocked punt allowed the Jaguars to take a 21-16 lead in the third quarter.

Jacksonville was up 29-22 late in the third quarter before LA scored the final 17 points.

“That was growth, we could have easily said, `Here we go again. We’ve had a lead, we’ve lost a lead and here we go again,' but I love the way the team fought back and took control of that game," Lynn said.

Justin Herbert had his third 300-yard passing game in five starts and added 66 yards rushing, a single-game high for a Chargers QB. The rookie, though, is having most of the offense's performance fall on him with the running game struggling without Austin Ekeler. Joshua Kelley and Justin Jackson averaged 2.4 yards per carry.

“His ability to read coverages is improving every single week,” Lynn said of Herbert. “We’re trying to simplify things. We’ve given him some half-field reads, but now we put more on his plate every single week. Yesterday, Jacksonville did a good job in the first half of disguising coverages in mixing more so than they had in the past. So he survived that and I thought he did fine.”

Herbert's arm on deep passes was considered a major strength coming out of Oregon. He has shown that the past three weeks, going 9 of 18 for 569 yards and four touchdowns in the past three games on passes in the air over 20 yards. Three have gone to Jalen Guyton, including a 70-yard touchdown during the third quarter, when Guyton hauled it in at the Jaguars 40 and was off to the races.

Special teams problems go beyond Michael Badgley's kicking struggles. Ty Long had a punt blocked, which led to a Jacksonville touchdown, while the punt and kickoff coverage units are near the bottom of the league in average yards.

Defensive end Melvin Ingram returned after missing the past three games due to a knee injury and had a pair of quarterback hits. Ingram was expected to see limited snaps but was in for 43 of the 68 defensive snaps.

Badgley is teetering on kicking himself out of a job. He made two field goals but missed an extra point for the second straight game, and was wide left from 48 yards. Lynn did give a vote of confidence to Badgley on Monday and said there were no plans to bring kickers in for tryouts this week.

TE Virgil Green will likely miss the next two games due to a sprained ankle he suffered after scoring a touchdown during the third quarter. Lynn said the team is awaiting further tests before deciding whether to place Green on injured reserve. Donald Parham, whose two catches have gone for scores, will likely move up to the backup spot.

The Chargers look to snap a seven-game losing streak in division games when they travel to Denver on Sunday. It will be the first matchup with RB Melvin Gordon, who signed with the Broncos after five seasons with the Chargers.