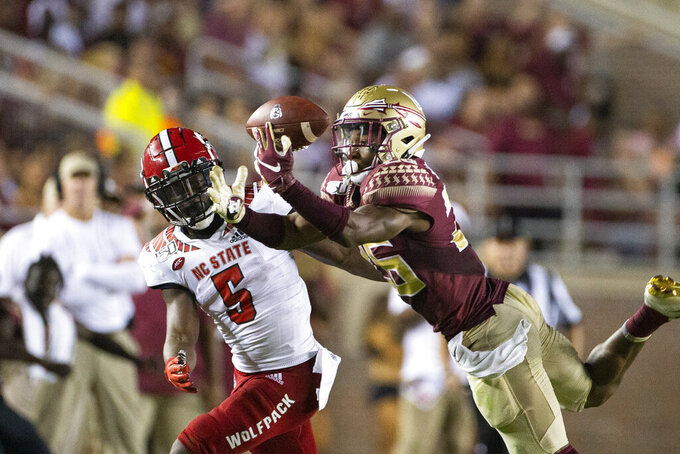 COSTA MESA, Calif. (AP) — Asante Samuel Jr. and Josh Palmer used to have spirited competitions during practices at St. Thomas Aquinas High School in south Florida. The two will now be reunited in the NFL.

The Los Angeles Chargers took Samuel in the second round with the 47th overall pick and then selected Palmer with the first of their two third-round picks at No. 77.

“I remember my very first rep at Aquinas was against Asante Samuel. He put his hands on me but it is going to be exciting to be reunited with him,” said Palmer, who played wide receiver at Tennessee.

The Chargers finished off the second day by taking Georgia tight end Tre’ McKitty at 97th overall. The pick was a compensatory selection after Philip Rivers signed with Indianapolis last season.

“I felt like we had a really productive day. We got a lot of really good value and felt like we were able to follow our draft board,” coach Brandon Staley said.

Samuel, who ended up going to Florida State as a cornerback, fills a need in the Chargers' secondary. He appeared in 32 games with 23 starts for Florida State from 2018-20.

Some thought Samuel might go in the first round but at 5-foot-10 and 184 pounds, he was the eighth cornerback to be selected.

“A lot of corners got picked before me because of their size. I feel like I’m going to make them correct that sooner or later," Samuel said. “My playmaking abilities wherever I’m at — on special teams, outside, inside — I feel like I’m just going to make plays, whether it’s a strip-sack, a strip, a fumble recovery, an interception, anything.”

Samuel is the second Florida State defensive back drafted by the Chargers over the past four drafts. Safety Derwin James was a first-round pick in 2018. James was a mentor to Samuel during his college career.

“He always wanted to play with me, and he tells me that the coaches love me. He just wanted to make sure that we ended up on the same team," Samuel said.

Samuel joins a Chargers defensive backfield that is light at cornerback. They re-signed Michael Davis but released Casey Hayward Jr. Davis and Chris Harris Jr. are projected to be the starters. Samuel also played on special teams at Florida State, which will be beneficial for a Chargers squad that was abysmal on return and coverage teams last season.

Samuel's father, Asante Sr., played 11 seasons in the NFL (2003-13) and won a pair of titles with New England. He also led the league in interceptions in 2006 with the Patriots and '09 with the Philadelphia Eagles.

Palmer had 99 receptions and four touchdowns in four seasons at Tennessee. Last year, 22 of his 33 catches went for first downs and 62 of his 475 yards were after the catch. Along with four touchdowns, he had nine receptions of 20 yards or more.

“I feel like my ability to go up and attack the ball, getting off the ball vertical and catching with my hands along with my route running and getting out of my breaks are my strengths,” Palmer said.

Los Angeles can only hope Samuel and Palmer can be in the same ballpark as the other Aquinas player on the roster — defensive end and perennial Pro Bowler Joey Bosa.

McKitty had six catches for 108 yards and a touchdown at Georgia last season. He spent his first three seasons at Florida State, where he had 50 receptions for 520 yards and two TDs. The Chargers had some need at tight end after Hunter Henry signed with New England during free agency.

General manager Tom Telesco said one of the things that stands out about McKitty is his run blocking.

“He is a very good line of scrimmage blocker and is able to do some of that dirty work,” Telesco said. “Hopefully, we’ll get him some balls, too, because he does have some athletic ability to get out in space and run.”

The Chargers addressed their needs at offensive tackle in the first round, taking Northwestern's Rashawn Slater with the 13th overall pick. They have five picks on Saturday.