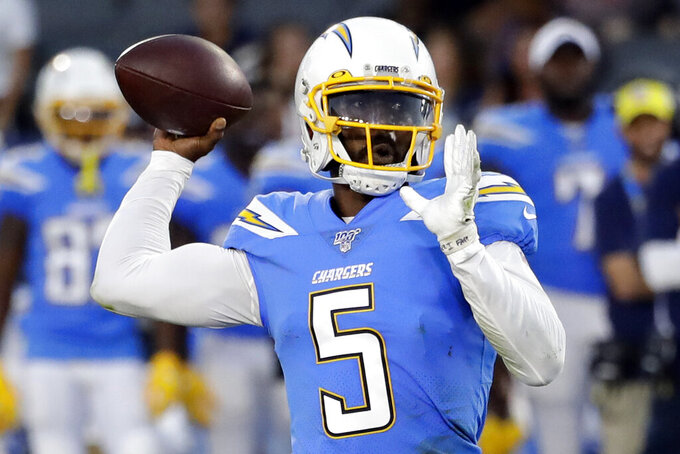 COSTA MESA, Calif. (AP) — Tyrod Taylor knew when was selected in the sixth round of the 2011 draft by the Baltimore Ravens that his road to becoming a starting quarterback wasn't going to be easy and that he was going to take advantage of every opportunity.

Now in his 10th season, Taylor has a golden opportunity to show what he can do with the Los Angeles Chargers. He will be the first quarterback not named Philip Rivers to start for the Chargers since 2015 when they open the season on Sunday at Cincinnati.

Taylor signed a two-year deal with Los Angeles in 2019. Some thought he would remain Rivers' backup throughout the contract, but the Chargers decided not to re-sign Rivers after going 5-11 last season.

“I’m very hungry. I’m excited to show what I am capable of doing,” Taylor said. “It's an opportunity to prove what I can do for my teammates as well as everyone else.”

This will be Taylor's first start since he was with Cleveland in 2018. He started the first three games before being injured during the first half of the Week 3 game against the New York Jets. Baker Mayfield came on and remained under center the rest of the season.

Taylor should have a better chance of succeeding with the Bolts than he did with the Browns. Even though there is another first-round pick waiting in the wings, the offense has more stability as well as a head coach and offensive coordinator who are on the same page.

He also has a head coach who is firmly in his corner. Anthony Lynn and Taylor were together in Buffalo for two seasons (2015-16). Lynn ended up being the offensive coordinator for most of 2016. Taylor was 22-20 as a starter during his four seasons in Buffalo and helped the Bills break an 18-year postseason drought in 2017.

Lynn is hoping Taylor can show two things that the offense didn't last year — be more diversified and take care of the ball. Taylor's mobility allows offensive coordinator Shane Steichen to be able to expand the playbook with run-pass options

As for turnovers, Los Angeles is hoping to avoid repeating last year's 31 giveaways, which including a league-high six in the red zone.

“There will be some more movement, obviously some extended plays just because of the nature of our guy’s legs. So definitely we’ll be a little bit different than what you’ve got to see in the past,” tight end Hunter Henry said.

Taylor is familiar with Cincinnati from his time with division rivals Baltimore and Cleveland. He faced him twice as a starter with Buffalo in 2016-17 and is 1-1.

He has seen plenty of the Bengals' pass-rushing duo of Geno Atkins and Carlos Dunlop over the years, but said it is a challenge preparing due to no preseason games and being able to watch film of this year's unit.

“It's just one of many challenges that have come with 2020. You try to get a feel of the defensive coordinator from watching last year's film to see how he calls a game.”

Even though many might consider sixth overall pick Justin Herbert as another challenge to deal with, Taylor said his focus remains on what is in front of him.

“It doesn’t add any extra pressure. All I can do is focus on what I can control,” he said. “We have a very good blend of young talent mixed with veteran talent and leadership. And I think that’s a recipe for a winning team. I’m excited about Sunday and the rest of the season.”

NOTES: WR Mike Williams, who has missed the past two weeks because of a shoulder injury, did work during individual drills and was listed as limited on the practice report. C Mike Pouncey (calf) is a bigger concern after not practicing. ... Taylor, Pouncey, Henry, DE Melvin Ingram and CB Casey Heyward were selected as team captains in a vote by the team.