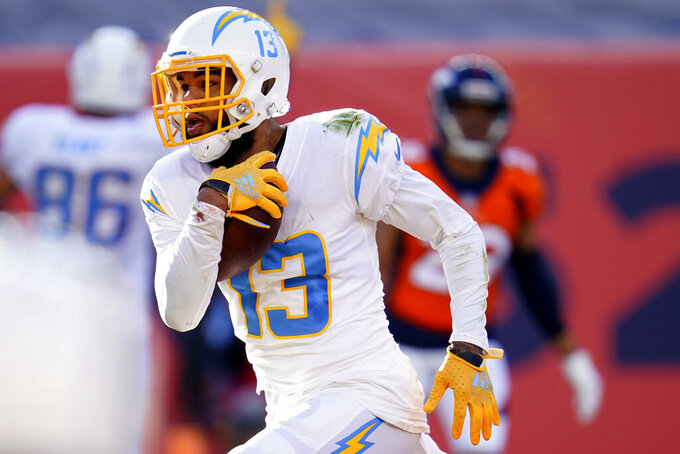 Los Angeles Chargers wide receiver Keenan Allen (13) scores a touchdown against the Denver Broncos during the first half of an NFL football game, Sunday, Nov. 1, 2020, in Denver. (AP Photo/David Zalubowski)

Allen was added to Saturday's injury report. Cornerback Brandon Facyson had an illness designation on Friday's report before being placed on the Reserve/COVID-19 list Saturday. The list is for players who either test positive or have been in close contact with an infected person.

Allen's absence would be a huge blow for the Chargers offense. He is second in the AFC with 53 receptions, fourth in yards (548) and has had eight or more receptions in three of the past four games.

The Chargers also announced they have signed defensive end Jessie Lemonier to the active roster. Lemonier has appeared in three games after signing as an undrafted free agent out of Liberty.

Running back Kalen Ballage and defensive back Quenton Meeks have been activated from the practice squad and safety Jaylen Watkins has been added to the practice squad. Watkins was with the Chargers the past two seasons and appeared in 14 games with three starts last year.