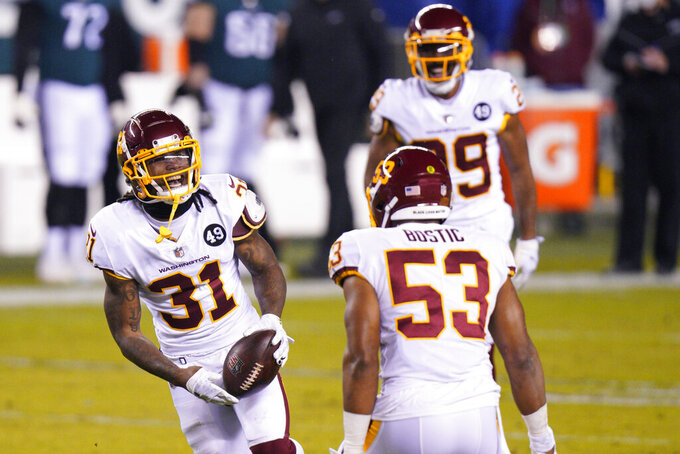 Defense won the NFC East championship for Washington, even if much of the talk the day after clinching the division was about Philadelphia losing with a third-string quarterback.

Coach Ron Rivera on Monday said he wasn't going to apologize for beating the Eagles, who benched Jalen Hurts for Nate Sudfeld in the fourth quarter on the way to Washington winning 20-14. That ending shouldn't take away from a defense led by rookie Chase Young that rose to the challenge this season after years of mediocre results.

Washington finished the regular season ranked second in the NFL in total defense and against the pass. The unit with four recent first-round picks — Young, Montez Sweat, Jonathan Allen and Daron Payne — should make things difficult for Tom Brady and the Tampa Bay Buccaneers this weekend in the first round of the playoffs.

"We are fortunate that we have some front-line guys that set the example," Rivera said. “You look at the defensive line, and Jonathan Allen has been as upfront as anybody. But then you throw some youthful exuberance in with Chase, and you think, ‘Wow.'”

Washington (7-9) allowed Philadelphia just 216 yards and over the course of the season 304.6 a game, behind only the Los Angeles Rams. The defense ranked 27th, 17th, 21st and 28th the past four seasons.

That's a major improvement, but Brady and Tampa Bay's seventh-ranked offense present a different kind of challenge. The Buccaneers are 8-point favorites.

“We have to focus up,” Young said. “We have to lock back in. The game comes back fast. We’re playing Saturday. So it’s go time. It’s that time.”

The offense just works better with Alex Smith at quarterback than anyone else. He threw two touchdown passes and had two interceptions against the Eagles but got the job done.

Smith was 22 of 32 for 162 yards despite having his mobility limited by a strained right calf that caused him to miss the past two games.

“Alex came in and did what we hoped Alex would do, and lo and behold we got into the playoffs,” Rivera said.

Everything needs to be better to beat the Buccaneers. That includes offensive coordinator Scott Turner striking the right run/pass balance and players avoiding penalties that could've sunk the team at Philadelphia.

The odds are stacked against Washington against an 11-5 opponent.

“The old saying goes: ‘All you need is a chance,’" said Rivera, who also won a playoff game with 7-8-1 Carolina six years ago. “That’s what we have is a chance. It’s interesting because there’s been a lot of upset victories throughout time.”

Terry McLaurin is back. The second-year receiver only missed one game with an ankle injury, but it had been hampering him since before Thanksgiving.

McLaurin had seven catches, including a touchdown, against Philadelphia. Smith has some safety valves in the passing game but none more important than McLaurin, who is the key to keeping an opposing defense honest.

“Terry has been such an integral part in just two seasons,” Rivera said. “For him to come up like that, it was huge. It just shows everybody who he is and that he’s going to lay it all on the line for his teammates.”

This is minor in the grand scheme of things, but linebacker Cole Holcomb took a couple of penalties in the Eagles game, including a 15-yard personal foul for unnecessary roughness. Holcomb has emerged as a starter and key piece of the defense, and if he can avoid those mental mistakes, he has the skill to make a real impact against the Buccaneers.

Smith's status remains the biggest question. His calf injury is to the same leg he broke two years ago and had a titanium rod put in.

The 36-year-old could go all week with limited or no snaps in practice and still play Saturday night.

“Until I get a chance to find out where Alex is, I can’t really predict anything,” Rivera said. “If Alex can go, Alex will go. If Alex can give us one quarter, two quarters, three, whatever, that’s great."

16 — The regular-season games it took before Washington scored on its opening drive. Now that the drought is over, the offense will try to make it two in a row.

Prepare for Brady's best in his 42nd playoff game and first not in a New England Patriots uniform. Getting to him early and often is likely Washington's only chance.