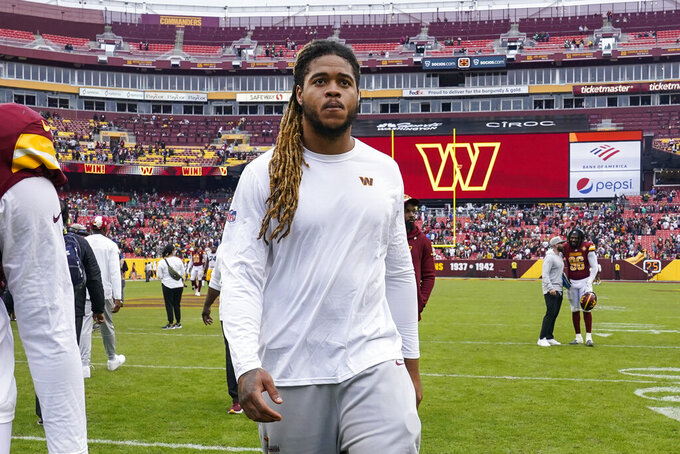 FILE - Washington Commanders defensive end Chase Young (99) walks off the field after an NFL football game against the Green Bay Packers on Oct. 23, 2022, in Landover, Md. Young is expected to practice with the Washington Commanders this week for the first time since tearing the ACL in his right knee 11 months ago, according to coach Ron Rivera on Monday, Oct. 31. (AP Photo/Susan Walsh, File)

ASHBURN, Va. (AP) — Chase Young practiced with the Washington Commanders on Wednesday, his first time doing so in nearly a year since tearing the ACL in his right knee.

Young took part in individual drills as expected Wednesday after the team started his 21-day clock to activate him off the physically unable to perform list. Coach Ron Rivera would not commit to Young playing Sunday against the Minnesota Vikings.

“That’s probably jumping the gun," Rivera said. "He did look good. We’ll see how he is tomorrow, how he reacts to the amount of work he had. He looked quick. He looked spry. He was excited. We’re going to follow what the trainers and doctors tell us about this.”

Young, the team and doctors have taken it extra careful with the pass rusher’s recovery from surgery, which involved grafting part of his left patellar tendon to fix the tear on the other side. The 23-year-old said even though the practice was without pads and helmets he felt “like a football player again.”

He insists he did not have a timeframe for when he'd be back.

Even missing Young, Washington's front four led by defensive tackles Jonathan Allen and Daron Payne and edge rusher Montez Sweat has been a key part of the team's three-game winning streak to get back to .500 at 4-4.

The No. 2 pick in 2020 out of Ohio State, Young was the AP Defensive Rookie of the Year that season when he had 7½ sacks. He had 1½ last season before getting injured Nov. 14 against Tampa Bay.

Off the field, police in Washington announced they made an arrest Wednesday in the August shooting of rookie running back Brian Robinson Jr.

D.C. Police said it arrested a 17-year-old who was 16 at the time of the robbery and charged him with assault with intent to rob while armed.

Robinson was shot twice in the right leg Aug. 29. He went on the non-football injury list and played five weeks later and has since run for 175 yards and a touchdown in four games.

Rivera ran practice Wednesday after the team announced his mother, Dolores, died earlier in the week. He spent two days with her in California last week.

“If there was an inspiration in my life more so than admiring who my father was, it was taken from my mom,” Rivera said, crediting his start in football in part to his mother. “And that's the hard part.”

In Buffalo, Bills general manager Brandon Beane opened his news conference to discuss the acquisitions of running back Nyheim Hines and safety Dean Marlowe by talking about Rivera, with whom he worked in Carolina.

“First off, I learned last night that Ron Rivera’s mother passed away so I want to send our condolences from me and my family, the McDermotts and all the people in the Buffalo Bills for Ron and his family. ”