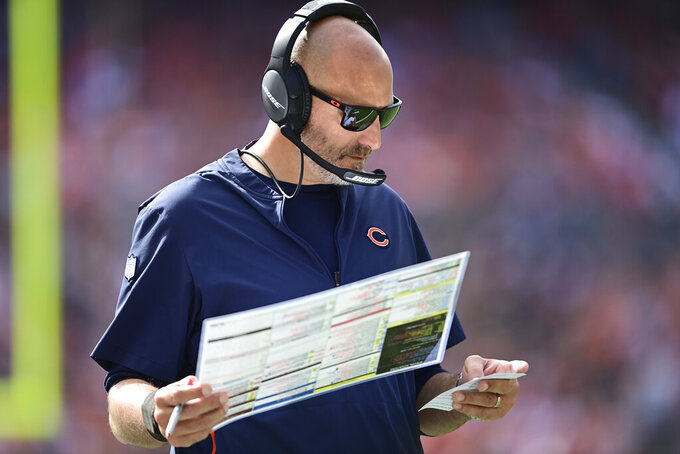 Chicago Bears head coach Matt Nagy looks on during the second half of an NFL football game against the Cleveland Browns, Sunday, Sept. 26, 2021, in Cleveland. (AP Photo/David Dermer)

LAKE FOREST, Ill. (AP) — A historically bad effort by the Chicago offense has coach Matt Nagy rethinking his approach after only the third week of the season.

It could all lead to a change in who calls the plays or even who the quarterback is as the Bears prepare to face the Detroit Lions on Sunday at Soldier Field.

“Again, just to keep it super simple, everything’s on the table,” Nagy said. “And I think that’s probably the easiest way to put it — the evaluation part, everything.”

Nagy stopped calling plays last year after nine games in the middle of a six-game losing streak. Against the Browns, the Bears had the second-fewest yards of net offense in franchise history (47) and ninth fewest in NFL history.

Nagy made it clear at this time he does not know who his quarterback will be against Detroit. A possible switch at quarterback comes more as a result of the health situation than anything, although 1 net yard passing against the Cleveland Browns by rookie Justin Fields in his first NFL start did not help.

Fields has an injured right hand and had it X-rayed after Sunday's 26-6 loss to Cleveland. The hand is sore, although results on a fracture were negative. Starter Andy Dalton is suffering from a bone bruise to his left knee and it led to Fields’ first start. Only third-string quarterback Nick Foles is entirely healthy and would be an option if neither Fields nor Dalton can play.

“When you don’t have the success we had on offense yesterday, with a rookie quarterback in Justin, of course it keeps you up at night because you want to figure out why,” Nagy said. “So we’re looking at everything right now. Looking at everything — I think that’s being completely honest with you, and real.

“I care about this situation immensely. Our players care. Our coaches care. So we gotta figure it out and we’ve got to figure it out fast.”

Fields went 6 of 20 for 68 yards Sunday and took nine sacks. This came after he finished up a win over Cincinnati after Dalton’s injury and went 6 of 13 for 60 yards.

Nagy doesn’t see Fields as the one to blame for a passing attack now ranked last in the league.

“I wouldn’t say that at all,” Nagy said. “Again, I loved his preparation. I think he learned a lot through the week of practice that we had. I think he got better every day.

“And again, one of the things that we talked about for him moving through this process that he’s going to go through is that there are going to be highs and lows. Now that was a low, a really low deal there. So we want to make sure that we’re doing everything we can to put him in situations to where he’s having success.”

There is nothing wrong with the Bears’ pass rush as they had five more sacks on Sunday, including 1 1/2 by Robert Quinn, who now has four sacks on the year after making two all last season.

The Bears have been particularly effective when they lined up both outside linebackers Quinn and Khalil Mack next to each other. It resulted in a sack Sunday by Mack.

Pass protection is shaky. as nine sacks allowed would indicate. The total was the most allowed by the Bears since Oct. 3, 2010 when the New York Giants sacked Jay Cutler nine times in one half.

Mack had two sacks, and now has three for the season. However, he suffered a foot sprain and left the game before returning in the second half.

Fields has played over six quarters and has had trouble moving the team. He is 14 of 35 for 138 yards with an interception and a passer rating of 39.9.

Besides Fields and Mack, the Bears also had linebacker Joel Iyiegbuniwe suffer a hamstring injury. There will be a close watch this week on starting linebacker Danny Trevathan and nose tackle Eddie Goldman as they could return from knee injuries.

4 — The number of touchdowns scored by the Bears this season, and one of those came on defense. Four TDs ranks 31st in the league.

The Bears host the Detroit Lions coming off their loss on an NFL-record field goal of 66 yards by Justin Tucker.