Chiefs aim for quicker starts as they begin title defense 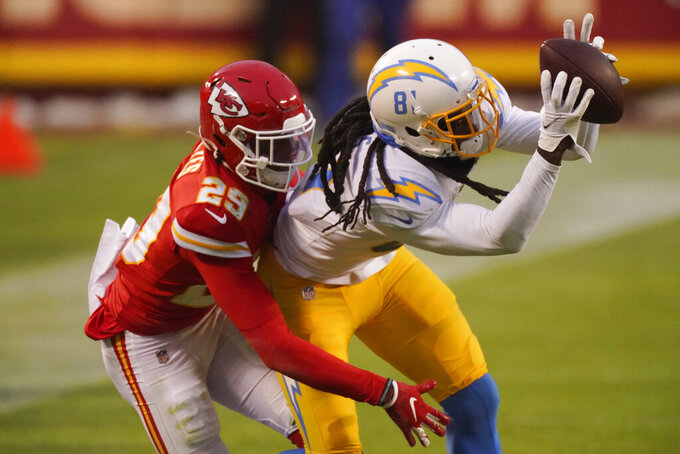 KANSAS CITY, Mo. (AP) — The Kansas City Chiefs have proven that they can overcome just about any deficit in the postseason.

That doesn't mean they want to keep doing it.

Of all the points of emphasis this weekend, when the Chiefs play the Cleveland Browns for a spot in their third straight AFC championship game, perhaps none is as consequential as this: Kansas City wants to start fast on Sunday, something it failed to do in falling behind by double figures in each of their playoff games last season.

“Yeah, our coaches brought it up: ‘Let’s not put ourselves in that same position we did last year,” Chiefs wide receiver Tyreek Hill said this week. “We just have to come out and have the same energy we've had all year.”

It would sure make a smoother road to the Super Bowl than the bumpy track they took last year.

The Chiefs began their journey to Miami by falling behind Houston by 24 points early in the second quarter, thanks in part to a blocked punt returned for a touchdown. But they responded by scoring 41 consecutive points, taking a 28-24 lead into halftime and piling on in the third quarter, eventually coasting to a 51-31 victory at Arrowhead Stadium.

It seemed like déjà vu in the AFC title game the following week, when Tennessee pounded its way to leads of 10-0 and 17-7 late in the first half. But much like the Chiefs did in the divisional round, Patrick Mahomes and his fleet flotilla of playmakers responded with 28 straight points, cruising in the fourth quarter to a 35-24 victory.

Then came the Super Bowl and probably the toughest deficit, when San Francisco turned a tied game at halftime into a 20-10 lead. It was still that margin when Mahomes hit Travis Kelce for a touchdown with 6:13 left, and the game's MVP followed with a touchdown pass to Damien Williams with 2:44 to take the lead. And when Williams rolled 38 yards for the clinching touchdown, the Chiefs had scored 21 points in a tick over five minutes for a 31-20 victory.

“I mean, you understand what it takes. That's the biggest thing,” said Mahomes, who hasn't played in three weeks after the Chiefs clinched the No. 1 seed and a first-round bye against Atlanta in late December.

“You know it's not easy. You'll have to put in a lot of work, but you can do it. Play to the best of our ability and it'll handle itself.”

For all their success this season, including a franchise-record 14 wins and a fifth straight AFC West title, very little has been a breeze. Mahomes has had to lead three fourth-quarter comebacks, including one against the Falcons, when he found wide receiver Demarcus Robinson with 1:55 left to give Kansas City a 17-14 victory.

“You can stand there as a coach and tell guys, ‘Hey, listen, it’s going to get faster every step you take. The competition is ridiculous,'” Chiefs coach Andy Reid said. “There might be a player or side to the ball you looked at during the season and you go, ‘Ahh,’ but immediately, today, you're going to get their best shot, and it's going to be faster and more aggressive.

“Like I said, you can stand there and say it,” Reid continued, “but for our guys to have experienced that, that was the most important thing, and we have a majority of the team coming back. Now, it's important you don't take it for granted that, ‘Oh, yeah, we're going to up our game too.' No, you got to work at it and bust your tail and dedicate yourself, be humble and all those things are important when you get into this. Everybody is going to give you their best shot and then some.”

NOTES: Running back Clyde Edwards-Helaire (high ankle sprain) did not practice for the second straight day Friday and will be listed as questionable, Reid said. He practiced Wednesday for the first time since getting hurt in Week 15. “We just kind of backed off him,” Reid said. “He's still doing stuff just not with the group. We'll see how he does here.” ... WR Sammy Watkins (calf) and LB Willie Gay Jr. (ankle) are out for Sunday. TE Deon Yelder (groin) is questionable. ... There's a chance LB Dorian O'Daniel, a special teams ace, will be activated from IR for the game. He's been out with a high ankle sprain.