Chiefs aim to repeat as Super Bowl champs against Buccaneers 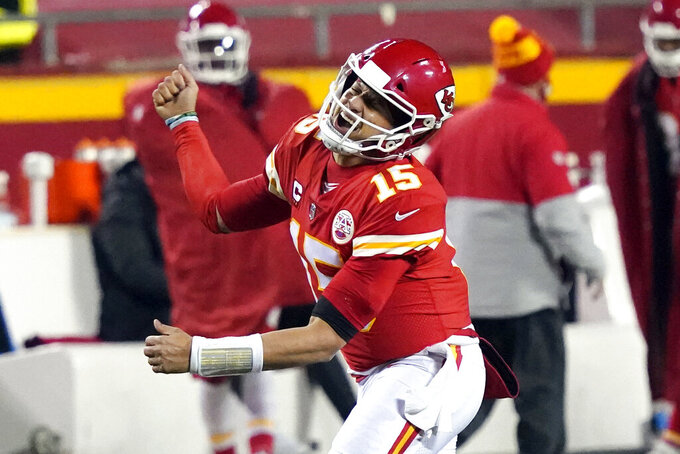 FILE - In this Sunday, Jan. 24, 2021, file photo, Kansas City Chiefs quarterback Patrick Mahomes celebrates after throwing a 5-yard touchdown pass to tight end Travis Kelce during the second half of the AFC championship NFL football game against the Buffalo Bills in Kansas City, Mo. The Super Bowl matchup features the most accomplished quarterback ever to play the game who is still thriving at age 43 in Brady against the young gun who is rewriting record books at age 25. (AP Photo/Jeff Roberson, File)

STREAKS, STATS AND NOTES — The defending Super Bowl champion Chiefs and Buccaneers have not met in the playoffs. ... Tampa Bay went 8-2 against common opponents this season. Kansas City went 7-2. ... This will be the first Super Bowl featuring the starting quarterbacks that won the previous two: Patrick Mahomes with the Chiefs last season and the Buccaneers' Tom Brady with the Patriots the previous season. ... Mahomes and Brady are the first QBs with MVP and Super Bowl MVP awards to meet in the Super Bowl. ... Mahomes (.830) and Brady (.757) have the highest and third-highest winning percentage among QBs with at least 50 starts since 1950. ... The Chiefs are trying to become the ninth team to win back-to-back Super Bowls and the first since the Brady-led Patriots in 2003 and ‘04. ... Chiefs coach Andy Reid (62) would be the oldest coach to win back-to-back Super Bowls. The Packers’ Vince Lombardi (54) has the record. ... Reid would earn his 18th postseason win, passing Hall of Fame coach Joe Gibbs for the fourth most in NFL history. ... Mahomes (25) is trying to become the youngest starting QB to win multiple Super Bowl titles. Brady is the only other QB with two in his first four seasons. ... Mahomes threw for 325 yards and three TDs without an interception in the AFC title game against Buffalo. He has 17 career postseason TD passes, the most by any QB in his first four seasons. ... Mahomes has a 109.8 passer rating in seven playoff games, the highest mark in NFL history. He needs 322 yards passing to break his own franchise record (901) for a single postseason. ... Mahomes had 462 yards passing and three TDs without an interception in the Chiefs’ Week 12 win over Tampa Bay. ... Unanimous All-Pro Travis Kelce had 13 catches for 118 yards and two TDs in the AFC title game, tying Shannon Sharpe and Kellen Winslow for the most receptions by a tight end in a playoff match. Kelce needs 91 yards receiving to break the record for a TE in a single season (317) set by the Colts’ Dallas Clark in 2006. ... Kelce needs two TD catches to tie Dave Casper’s record of five for a tight end set in 1977. He needs two catches to pass Dan Ross (22 in 1981) for the most by a TE in a postseason, needs 10 to break Larry Fitzgerald’s record for catches by any player, set for the Cardinals in 2008. ... All-Pro WR Tyreek Hill had a Chiefs record of 172 yards receiving in the AFC title game. ... Hill and Kelce are the only teammates in NFL history with at least 100 yards receiving in consecutive games in the same postseason. ... Hill and Kelce have 8,770 yards since the start of the 2018 season, passing the Hall of Fame duo of the Vikings’ Cris Carter and Randy Moss for the most by a pair of teammates over a three-year span. ... Chiefs DE Frank Clark had two sacks in the AFC title game, becoming the 14th player since the sack became an official statistic in 1982 with at least 10 in the postseason. ... Chiefs All-Pro SS Tyrann Mathieu had a career-best six interceptions in the regular season. He had another against Cleveland in the divisional round of the playoffs. ... L’Jarius Sneed has sacks in each of the Chiefs’ first two playoff games, becoming the first rookie CB to accomplish the feat since 1982. ... The Chiefs have allowed 24 points or fewer in four consecutive postseason games. ... WR Sammy Watkins (464) needs 18 yards receiving to pass Otis Taylor (481) for third most in Chiefs postseason history. Kelce (859) and Hill (723) are first and second. ... The Buccaneers are trying to become the seventh wild-card team to win the Super Bowl. ... The Buccaneers are the first team since 2012 (Baltimore) to beat the top two seeds in its conference. .. Tampa Bay coach Bruce Arians (68) would become the oldest coach to win the Super Bowl. ... Brady is trying to win his seventh Super Bowl, extending his record for a player. He would join Peyton Manning as the only QBs to win Super Bowls with multiple franchises. ... Brady has Super Bowl records for yards passing (2,838), single-game yards passing (505) and touchdowns passing (18). He is also the playoff leader in completions (1,085), yards passing (12,248), touchdowns passing (80) and wins (33). ... Buccaneers RB Leonard Fournette can join Terrell Davis and Larry Fitzgerald as the only players with touchdowns in four consecutive playoff games in the same postseason. ... Buccaneers TE Rob Gronkowski has 23 catches for 297 yards in four Super Bowl appearances, all with the Patriots. ... Gronkowski has the most receptions (83), yards receiving (1,206) and TDs (12) among TEs in the playoffs. Kelce is second in each category with 73 catches, 859 yards and nine TDs. ... Tampa Bay led the NFL in rushing defense (80.6 yards per game) for the second straight season while piling up its most sacks (48) since 2000. ... Buccaneers RB Ronald Jones set career highs with 1,143 yards from scrimmage, 978 yards rushing and seven TDs in 2020. ... The Buccaneers have five interceptions, two fumble recoveries and five sacks in their three playoff games. ... Tampa Bay LB Shaq Barrett had three sacks against Green Bay in the NFC title game, joining Warren Sapp as the only players in franchise history with three in a postseason game. ... Buccaneers CB Sean Murphy-Bunting has interceptions in each of his first three career playoff games. The only others to accomplish the feat are Aeneas Williams, Ed Reed and Jason Sehorn.