Chiefs and Patriots plenty familiar ahead of Sunday showdown 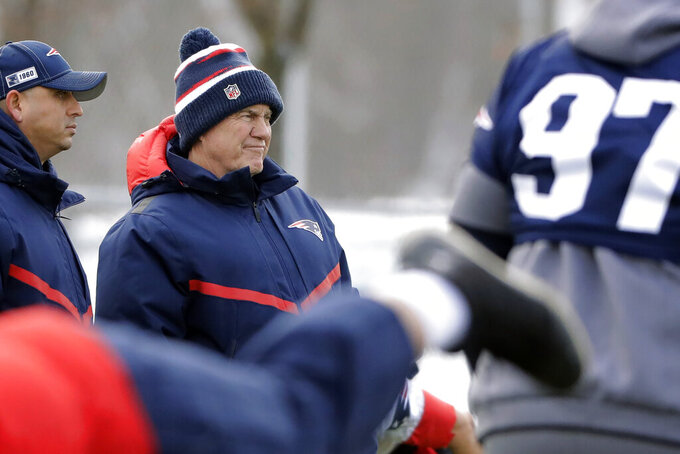 KANSAS CITY, Mo. (AP) — The Kansas City Chiefs have been dominant against the AFC West since Andy Reid’s arrival in 2013, winning so often against their most frequent opponents that it's little surprise they’re close to wrapping up a third straight division title.

The Chiefs should be just about as familiar with the New England Patriots by now.

Their record against them isn’t nearly as good.

In fact, the reigning Super Bowl champions have become the nemesis of the Chiefs and Reid. New England has knocked Kansas City from the playoffs twice in the past four seasons, including an overtime defeat in January’s AFC title game, and beat Reid’s best Eagles team in the Super Bowl after the 2004 season.

“I think they know us and we know them. You get in and you battle,” Reid said. “We’ve played them quite a few times here over the last few years. It just comes down to execution on both sides of the ball and on special teams. Playing good, solid football. Make sure we take care of our business.”

The Chiefs and Patriots are only assured of playing each other when the AFC West matches up with the AFC East every three years. But their number of meetings has gone up considerably in recent seasons, coinciding with the rise of the Chiefs and the continued excellence that Bill Belichick and Co. have established in New England.

The teams played 11 times over a 30-year span from 1981-2011. They’ll be playing for the sixth time in five years when they meet in a potential playoff preview Sunday in Foxborough.

“I’m sure he would tell you the same thing,” Reid said of Belichick, one of his longest-standing friends in the business, “you enjoy the challenge every week in this thing. That’s what we do. There is nobody better than he is. But he would also probably tell you, like I would, that he and I aren’t playing. Our guys are playing. So we have to get them prepared.”

There’s truth in that sentiment. But it’s also a convenient way for Reid to gloss over his rather shoddy record against Belichick: He’s won twice in nine meetings, and is 0-3 in the playoffs.

None was more frustrating than when Reid was with Philadelphia. The Patriots and Eagles were tied 14-all after the third quarter in Jacksonville, just 15 good minutes away from a Super Bowl championship, only for New England to score the next 10 points and hang on for a 24-21 victory.

The second-most frustrating may have been this past January.

After rolling to home-field advantage throughout the playoffs, the Chiefs welcomed the Patriots to Arrowhead Stadium for the AFC title game. They fell behind 14-0 at halftime but made a series of crucial adjustments and took a 28-24 lead with just over 2 minutes left in regulation.

New England answered with a go-ahead touchdown from Rex Burkhead in the final minute, and the Chiefs forced overtime when Harrison Butker drilled a 39-yard field goal in the closing seconds.

The Chiefs had the momentum up until the moment they lost the coin toss.

The Patriots fielded the opening kickoff of overtime and methodically marched downfield against the Chiefs’ lackluster defense. It took them 13 plays, nearly 5 minutes and the help of a crucial penalty on then-Chiefs linebacker Dee Ford before Burkhead plunged in for the winning touchdown.

Patrick Mahomes and the Chiefs offense never got an opportunity with the ball.

“Obviously when you lose to a team,” the MVP quarterback said, “you’ll want to beat them the next time you play. I remember being on the sideline and having full confidence the defense was going to make the stop and they got really close on several times that drive.

“You never have that defeated feeling,” Mahomes added, “until after the game is over.”

Reid and Mahomes both made it clear this week that despite the familiarity the Chiefs and Patriots have established over the years, they expect to see something different on Sunday. The Patriots are the best in the league at throwing change-ups, and Mahomes acknowledged they’re “going to have stuff that we didn’t necessarily prepare for. They’re going to do stuff they haven’t done in two or three years.”

Then again, Belichick expressed similar sentiments about the Chiefs this week.

“Just watch them play. I mean, they roll up and down the field against everybody,” he said. “Andy’s a game-plan coach. He’s not going to do the same thing every day, every week. He’s not going to keep running the same plays over and over. That’s not what they do. They attack defenses, and each week is a little bit based on how he matches up against those teams and what they do.”