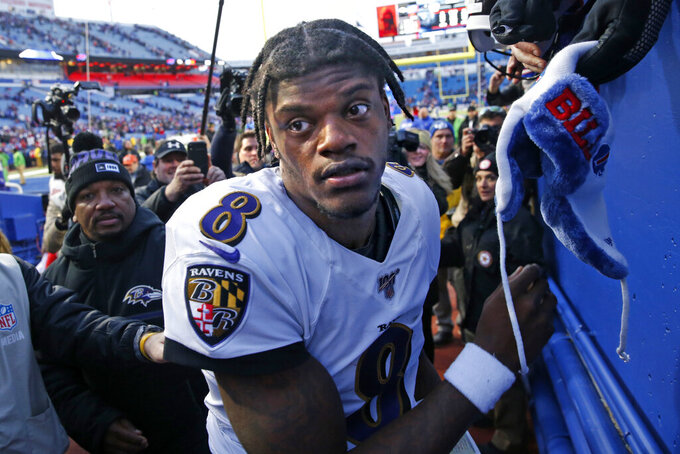 Baltimore extended its franchise-best winning streak to nine and improved to 11-2, its best record through 13 games in team history.

Jackson finished 16 of 25 for 145 yards and appeared to blow open the game by putting the Ravens up 24-9 following a 4-yard touchdown pass to Willie Snead with 9:49 left.

Buffalo's Josh Allen responded with a seven-play, 78-yard touchdown drive capped by his 3-yard pass to Cole Beasley, who dived inside the left pylon. The same two then hooked up on a 2-point conversion.

The outcome wasn't decided until there were 63 seconds remaining. Facing fourth-and-8 at the Baltimore 16, Allen's pass over the middle intended for John Brown was broken up by Marcus Peters at the goal line.

Jackson upped his record to 17-3 since being selected with the final pick of the first round in the 2018 draft. Allen, drafted with the seventh pick overall, dropped to 14-10.

Buffalo (9-4) had a three-game winning streak snapped, and fell short 10 days since grabbing national attention following a 26-15 win at Dallas on Thanksgiving Day.

The Chiefs survived a series of mistakes and questionable calls by the officials to hold off the Patriots. Combined with Oakland's loss to Tennessee, the Chiefs (9-4) took their division. And the loss ended the Patriots' 21-game home win streak in the regular season and playoffs, which was tied for the longest in team history. It also was the third-longest string in NFL history.

Trailing 23-16, New England got the ball back on their 32 with 5:04 to play. The Patriots immediately gained 35 yards on a pass from halfback James White to Jakobi Meyers to get into Kansas City territory. Officials appeared to miss a clear pass interference call on a deep pass to Phillip Dorsett and the Chiefs forced a fourth-and-6 at the 29.

But the 42-year-old Brady got free and scrambled 17 yards for a first down.

The Patriots couldn't get into the end zone, however, losing the rematch of January's AFC title game.

The Saints took their last lead on Drew Brees' fifth touchdown pass of the game — an 18-yarder to Tre'Quan Smith with 53 seconds left. But Brees' pass on an attempted 2-point conversion fell incomplete, leaving New Orleans' lead at one point.

The victory kept San Francisco (11-2) in strong position to capture the top seed in the NFC playoffs. The Niners can clinch a playoff berth if Seattle loses to the Rams in a night game.

Niners receiver Emmanuel Sanders had a 75-yard touchdown and added his second-career touchdown pass after taking a handoff on a reverse.

Brees finished 29 of 40 for 349 yards and also dived across the goal line for a touchdown. Michael Thomas caught 11 passes for 134 yards and a score, but the Saints, 10-3 and already the NFC South champions, were done in by a few critical failures.

With an aggressive, inventive game plan on both sides of the ball, Los Angeles recaptured a measure of the excitement from its previous two seasons on offense while also playing superb defense against Russell Wilson, who was sacked five times.

The Rams won for the fifth time in seven games, while the Seahawks (10-3) fell out of first place in the NFC West with just their second loss since Sept. 22 and their first road defeat of the season.

Wilson passed for 245 yards amid constant pressure from the Rams. Quandre Diggs returned an interception 55 yards for a touchdown early in the third quarter, but it was the Seahawks’ only touchdown.

The Titans (8-5) bounced back from a deflected interception on the opening drive to score TDs on five of their next seven possessions to improve to 6-1 with Tannehill as the starting quarterback. The win moved them into a tie for first place in the AFC South with Houston, with the teams set to meet twice in the final three weeks.

Tennessee broke open a tight game with a three-touchdown barrage in a span of just over seven minutes of the second half that all but ended the playoff hopes for the Raiders (6-7) in their final season in Oakland.

What had been a promising season for the Raiders with a three-game win streak in November that improved them to 6-4 has gone off the rails the past three weeks. They lost by 31 points in successive road games against the Jets and Chiefs and then fell apart in the second half against Tennessee.

GLENDALE, Ariz. (AP) — Diontae Johnson returned a punt 85 yards for a touchdown and caught a pass for another score.

Pittsburgh's defense had three crucial interceptions in the second half — two by Joe Haden and another by T.J. Watt —- to end Arizona drives, including two that had ventured into Steelers' territory.

Pittsburgh (8-5) won for the seventh time in eight games to stay in the AFC playoff race. Rookie free agent quarterback Devlin Hodges made his third career start, completing 16 of 19 passes for 152 yards and a touchdown.

Hodges didn't need to make many tough throws but came through with a good one in the third quarter, hitting Johnson in the front corner of the end zone for a 2-yard touchdown that gave the Steelers a 20-10 lead.

Arizona's Kyler Murray completed 20 of 30 passes for 194 yards and two touchdowns, but his three interceptions were very costly.

JACKSONVILLE, Fla. (AP) — Philip Rivers threw for 314 yards and three touchdowns, including an 84-yarder to Austin Ekeler that was the longest completion of the quarterback's 16-year NFL career.

It was Jacksonville's fifth consecutive lopsided loss, all by at least 17 points. The 1986 Tampa Bay Buccaneers were the last NFL team to drop five straight by at least 17.

Jacksonville's last two have been embarrassments at home — both essentially settled before halftime.

The Chargers (5-8) scored on four of five possessions in the first half, picking apart Jacksonville's beleaguered defense and taking a 24-3 into the locker room. It was a welcome cushion for a team whose eight losses each came by seven points or fewer.

GREEN BAY, Wis. (AP) — Aaron Jones rushed for a season-high 134 yards and a touchdown on just 16 carries. Jones had his third 100-yard rushing game of the season and hauled in six catches for 58 yards. With fewer than three minutes left in the game, the third-year running back had more total yards (192) than the Redskins (187).

Dwayne Haskins completed 16 of 27 passes for 170 yards and a touchdown with an interception for Washington (3-10), which was officially eliminated from playoff contention. The rookie quarterback was sacked four times.

Derrius Guice exited after only five carries with a knee injury.

Winston overcame throwing three more interceptions and having one returned for a TD for the fifth time season to wipe out a 14-point second-half deficit. He led the Bucs (6-7) to their third straight win and fourth in five games.

The Colts (6-7) have dropped five of six following a 5-2 start, falling from first place to third in the AFC South.

Winston threw for TDs of 61 yards to Mike Evans, 3 yards to Cameron Brate and 17 yards to Justin Watson before putting the Bucs ahead for good with a 12-yarder to Breshad Perriman with 3:51 remaining.

Jacoby Brissett completed 19 of 36 passes for 251 yards, two TDs and no interceptions for Indianapolis. Darius Leonard returned one of his two interceptions 80 yards for a second-quarter TD, and Marcus Johnson had a 46-yard scoring reception and finished with 105 yards on three catches for the Colts.

ATLANTA (AP) — Matt Ryan threw the longest touchdown pass of his career and became the 10th quarterback in NFL history to reach 50,000 yards.

The Panthers (5-8) were officially eliminated from playoff contention with their fifth straight loss, which ruined the debut of interim coach Perry Fewell. He took over at the beginning of the week after longtime coach Ron Rivera was fired.

Atlanta (4-9) snapped a two-game losing streak and swept the season series with its I-85 rival. The Falcons won the first meeting 29-3 at Charlotte on Nov. 17.

Throwing from his end zone, Ryan finished off the Panthers with a 93-yard touchdown pass to little-used Olamide Zaccheaus in the third quarter. It was a milestone play for both: the longest TD of Ryan's 12-year career, and the first career reception for Zaccheaus, an undrafted rookie.

Fewell and the Panthers endured a thoroughly miserable game. Kyle Allen was picked off twice and lost a fumble. Carolina fumbled another one away on a kickoff return, the ball deflecting into the arms of kicker Younghoe Koo, setting off a wild celebration as Koo bounced toward the sideline.

Ryan increased his passing total to 50,279 yards. His next target on the career list is John Elway, the NFL's ninth-leading passer with 51,475 yards.

HOUSTON (AP) — Rookie Drew Lock threw for 309 yards and three touchdowns, Kareem Jackson had an interception and returned a fumble 70 yards for a touchdown against his former team.

Lock, who made his NFL debut in a win over the Chargers last week, threw for 235 yards with three TDs in the first half. It was the most yards passing in a first half by the Broncos since Peyton Manning had 282 in Week 5 of 2014.

The Broncos (5-8) scored on their first five possessions to build a 38-3 lead early in the third quarter. They scored more than 24 points for the first time since Oct. 19, 2018.

Houston's hold on the AFC South took a hit as the Texans (8-5) came out flat in a terrible first half a week after downing the Patriots 28-22 for their first win in the series since 2010. The Texans are one-half game ahead of the Titans (7-5), who play in Oakland later Sunday.

Deshaun Watson threw for 292 yards with one TD pass and two interceptions after throwing three touchdown passes and grabbing his first career TD reception in a stellar performance against New England.

Denzel Ward returned an interception 61 yards for Cleveland's first score and the Browns (6-7) got a huge late break. Mayfield's third interception was reversed with a rare interference call to bounce back after a discouraging loss at Pittsburgh last week.

Cleveland needs to run the table to have any chance of ending its 17-year postseason drought, the NFL's current longest.

The Bengals (1-12) couldn't build on their win last week over the Jets and have dropped 19 of 21 over the past two seasons. Cincinnati running back Joe Mixon rushed for a career-high 146 yards and scored a TD. Bengals kicker Randy Bullock had field goals of 34, 44, 28 and 46 yards, the last with 12 seconds to go.

Sam Darnold got the winning drive going with a short pass to Vyncint Smith, who turned it into a 37-yard gain that included a high-step over a would-be tackler. After a sack two plays later put the ball at the Dolphins 46, Darnold threw an incomplete pass to Smith — but the Jets argued that Nik Needham interfered with the receiver by wrapping his right arm around Smith's right shoulder.

Officials overturned the incompletion after a video review — giving the Jets a first down and new life. A 12-yard catch by Ty Montgomery got the ball to the 26. Two plays later, Ficken won it, helping the Jets (5-8) avoid a season sweep by the lowly Dolphins (3-10).

The Jets — who lost to the previously winless Cincinnati Bengals last week — overcame a Dolphins franchise-record seven field goals by Jason Sanders, including a 37-yarder that gave Miami the lead with 1:33 left.

MINNEAPOLIS (AP) — Danielle Hunter had three of Minnesota's five sacks to spearhead a resurgence by the defense to stick the Lions with their sixth straight loss.

Kirk Cousins passed for 242 yards and a touchdown in an efficient if unspectacular performance. Dalvin Cook had 75 yards from scrimmage and a rushing score on 20 touches over three quarters as the Vikings (9-4) took it easy on their star tailback after an injury to his collarbone area forced him out of the previous game.

The defense stole the show, even though the opponent was undrafted rookie quarterback David Blough. Detroit's Matthew Stafford was sidelined by hip and back injuries for the fifth straight game.

Blough went 24 for 40 for 205 yards, one touchdown and two interceptions in the second half, and the Vikings yielded their lowest score in 31 regular-season games since a 16-0 win at Green Bay on Dec. 23, 2017.