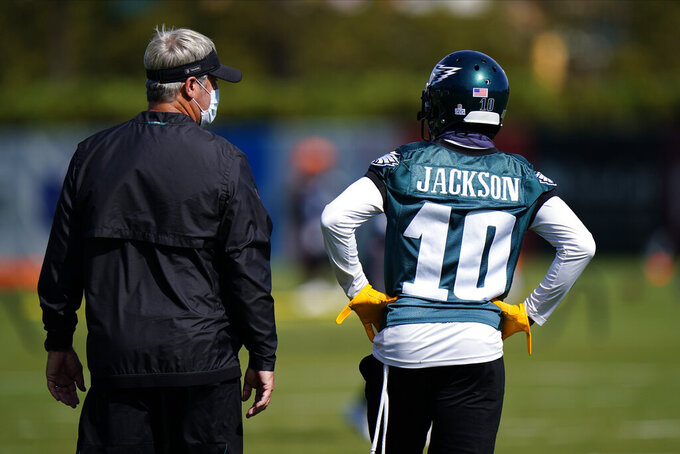 KANSAS CITY, Mo. (AP) — Not long ago, NFL Films sat down with Kansas City Chiefs coach Andy Reid to reflect on his four decades in football. The offensive mastermind affectionately known as “Big Red” had a rare opportunity to ponder his past.

The wins and losses, sure. The highs and lows. But more than anything else, Reid found himself thinking about the people in coaching that have meant so much to him, including the 10 that have joined him at the pinnacle of their profession.

“Very seldom in this business do you reflect. You just don't do that,” Reid explained, “and then to hear all the old stories, some of them go all the way back to Veterans Stadium and some of the stories that went on there: the cats, the rats, all that crazy stuff, and beer flowing into your office after games. You kind of put that on hold until you retire.”

Or you leave it to other people to discuss.

It doesn't take a long look around the league to find someone that learned the ropes under Reid, whether during his long tenure in Philadelphia or his second act in Kansas City. A couple years ago there were seven former Reid assistants with head jobs, and there are still five this season: the Ravens' John Harbaugh, the Eagles' Doug Pederson, the Bills' Sean McDermott, the Bears' Matt Nagy and Ron Rivera, who is in his first season coaching the Washington Football Team.

Two of them won Super Bowls — Harbaugh and Pederson — before Reid joined them in that exclusive club last season.

“I learned a lot from him, on and off the field,” said McDermott, who like Harbaugh lost to his mentor earlier this season. “You go back to a lot of the things we do, I learned from Andy. That's not going to change. He made the blueprint for me and that's why he is where he is, in terms of the all-time wins list. That doesn't happen by mistake or accident.”

Where that is: the top five. Reid won his 230th career game when the Chiefs improved to 8-1 with a 33-31 victory over the Panthers on Sunday, breaking a tie with Hall of Fame coach Curly Lambeau. The only coaches ahead of him on the list are Don Shula, George Halas, Bill Belichick and Tom Landry.

Reid's vast coaching tree is actually a mere branch — albeit a big one — that traces itself through Bill Walsh and all the way back to Sid Gilman of the Chargers and Paul Brown of the Bengals and Browns. All Hall of Fame coaches.

Much of the knowledge Reid imparted on his former assistants he learned from Walsh, the longtime 49ers coach, and Mike Holmgren, the Packers coach under whom he flourished first as an offensive assistant and later as the assistant head coach.

“I can use myself as an example,” Reid said. “I never called a play until I became a head coach, but coach Holmgren would leave it open and ask you for an idea. You're talking about a future Hall of Fame coach here. I know Bill Walsh did it the same way, likewise. That part hasn't changed here.”

That kind of input is one of the reasons Reid's assistants are in such hot demand.

Brad Childress was the first to be plucked away, serving as Vikings head coach from 2006-10. His replacement in Minnesota, Leslie Frazier, also worked for Reid, while former Jets coach Todd Bowles and former Browns, Eagles and Giants coach Pat Shurmur also plied their trade under “Big Red” before getting a chance to be in charge.

“One thing about coach Reid and all his former assistants, there's a close, dynamic relationship because we all spend a lot of time together,” said Chiefs offensive coordinator Eric Bieniemy, who could be the next one to get a head coaching job.

Bieniemy has interviewed for several openings the past couple of years. So has Chiefs special teams coach Dave Toub.

“The one thing that I feel that coach Reid does a great job of, and (Bieniemy), and it trickles down to myself, is allow people to be who they are,” Chiefs wide receivers coach Greg Lewis said. “Let their personality show and be themselves.”

Not surprisingly, that leads to a certain amount of loyalty. Many of the coaches on Reid's current staff have been with him since he arrived in Kansas City prior to the 2013 season, and some who have gone on to bigger and better things have found their way back. Childress spent some time as an analyst and later assistant head coach with the Chiefs, and Steve Spagnuolo was hired last year as the defensive coordinator, helping to turn around one of the league's worst units.

That loyalty is passed down through Reid's coaching tree, too. Harbaugh and Pederson both have employed longtime Reid assistant Marty Mornhinweg, and McDermott was Rivera's defensive coordinator during his time with the Panthers. Former offensive line coach and defensive coordinator Juan Castillo is now on Nagy's staff in Chicago.

On and on it goes, the tentacles stretching to all corners of the NFL. No wonder NFL Films found plenty of content around which to build an entire television special.