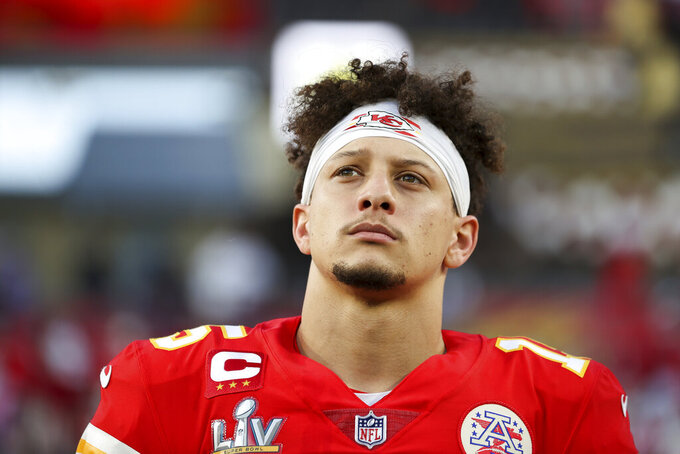 Kansas City Chiefs quarterback Patrick Mahomes (15) stands during the performance of "Lift Every Voice and Sing" prior to the NFL Super Bowl 55 football game against the Tampa Bay Buccaneers, Sunday, Feb. 7, 2021, in Tampa, Fla. (Ben Liebenberg via AP)

KANSAS CITY, Mo. (AP) — The Kansas City Chiefs expect Patrick Mahomes to be ready for offseason workouts following surgery on his toe, and they are optimistic that offensive tackles Eric Fisher and Mitchell Schwartz could be available for the start of training camp.

Mahomes had surgery on Feb. 10, shortly after the Chiefs were walloped by the Tampa Bay Buccaneers in the Super Bowl, to repair a turf toe injury that had hobbled him throughout the playoffs. The recovery time is about three months, which means Mahomes — whose fiancée recently gave birth to their first child — could be ready for summer minicamp.

Perhaps more surprising was the positive outlook on Fisher, who tore his Achilles tendon against the Buffalo Bills in the AFC championship game, and Schwartz, whose disk injury in his back limited him to just six games early in the season.

“We're hopeful we'll have him by training camp (in August), and the same with Fisher. We're hopeful these guys will complete their rehab and be available for training camp and to start the 2021 season,” Veach said. “I would say Pat is probably ahead of them just because of that type of injury and probably a quicker recovery, but hopefully we'll have all three of them ready for the start of training camp.”

That would be good news for a team whose makeshift offensive line was dominated by the Buccaneers in the Super Bowl.

Fisher was voted to his second Pro Bowl last season, and Schwartz was an All-Pro in 2018, and together they created one of the best pairs of tackles in the NFL. But their loss forced the Chiefs to juggle an offensive line that had lost Kelechi Osemele to torn knee tendons and had guards Laurent Duvernay-Tardif and Lucas Niang opt out of the season.

Then again, there's the contract situations to weigh: The Chiefs enter the offseason about $18.6 million over the salary cap, and they can free up about $12 million by releasing Fisher ahead of the final year of his contract and another $6.3 million if they cut loose Schwartz ahead of the final year of his deal. And while the Chiefs are typically reluctant to let established players depart, Veach acknowledged the draft class this year is particularly deep on the offensive line.

Fisher and Schwartz also could agree to restructured deals, extensions and ultimately pay cuts to remain the protectors for Mahomes, knowing full well their market will be depressed coming off injuries and they will continue to have a chance to win championships with an organization that has an established quarterback and head coach.

“Free agency will be a unique animal for us,” Veach said. “On one end, we'll work our conversions to get under the cap, and then what we do will be largely dependent on what becomes available to us. Then on the draft, I think that will be — it kind of works hand-in-hand, based on how free agency works out.”

Mathieu is entering the final year of his deal and carries a cap hit of $19.7 million, the most of any safety in the league, so the Chiefs intend to discuss an extension that would lower that number while keeping him around several more years.

“We have some work to do to get with him and his agents,” Veach said, “but enough can't be said about Tyrann and his importance to this organization. He's a great leader and just a great person to have.”

Things aren't so cut-and-dried for Watkins, who took a pay cut last offseason to remain in Kansas City. He once again was slowed by injuries, appearing in just 10 games and missing most of the postseason. And when he did return for the Super Bowl, he was so limited by a calf injury that he had just one catch for 13 yards in the loss to Tampa Bay.

Veach acknowledged there is plenty of depth at wide receiver in the draft. The uncertain salary cap number given the COVID-19 pandemic — and its affect on the NFL's bottom line — also means there could be more mid-tier players available than usual in free agency, giving the Chiefs more options if they want to move on from him.

“I've said it many times before, I love Sammy and what he does for our offense," Veach said. “There will be challenges this year, just because of were we are. We were able to work with him and his agent last year and make it work. This year it'll be even more difficult because there will be some work to get below the cap.”