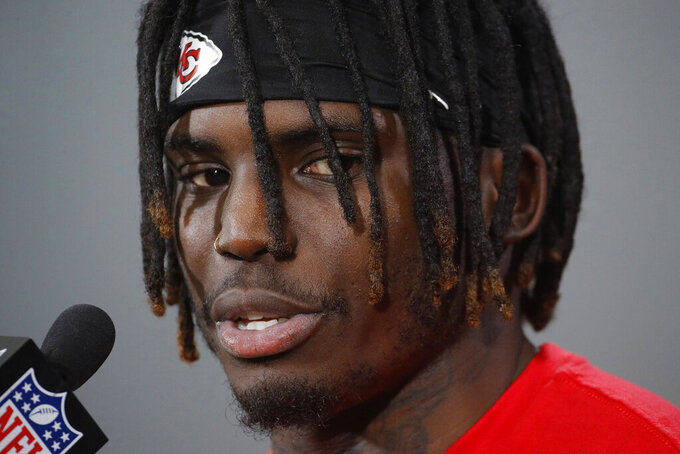 FILE - In this Jan. 18, 2019, file photo, Kansas City Chiefs wide receiver Tyreek Hill talks to the media after a workout in Kansas City, Mo. The NFL will not suspend Chiefs wide receiver Tyreek Hill under its personal conduct policy after the league investigating his involvement in a domestic violence incident involving his 3-year-old son. The league said in a statement Friday, July 19, 2019, that it has not been given access to information in the court proceedings, and a district attorney in June said an investigation was dropped because officials couldn't prove who injured the boy. (AP Photo/Charlie Riedel, File)

ST. JOSEPH, Mo. (AP) — The biggest questions swirling around the Kansas City Chiefs this offseason centered on Tyreek Hill, and whether their speedy, record-setting wide receiver would be around at all this season.

Turns out he'll be around for the start of camp.

Chiefs coach Andy Reid confirmed Tuesday that Hill would report to Scanlon Hall on the campus of Missouri Western State University with the rest of the veterans on Friday, one week after the NFL said it would not punish him following an investigation into domestic violence involving his 3-year-old son.

Hill has been away from the team since the draft in April, when audio first surfaced in which his then-fiancee, Crystal Espinal, accused him of hurting their son. But an investigation by the Johnson County, Kansas, district attorney resulted in no criminal charges being filed, and a subsequent inquiry by the NFL that included an 8-hour meeting with Hill in Kansas City likewise turned up nothing.

So when the NFL declined to punish Hill, the Chiefs likewise lifted their own suspension.

"We look forward to bringing him back here and have an opportunity to get back doing what he loves to do," Reid said. "He has some obligations that he'll take care of as he goes. I'm not going to get into all that. But we have trust in Tyreek that we're going to go forward in a positive way here."

The Chiefs were negotiating a long-term contract with Hill when the controversy erupted, and it remains to be seen whether that outlook has changed. Hill is entering the final year of his rookie contract, and the Chiefs effectively control him for two more years through the franchise tag.

His price before the off-the-field situation had never been higher, either. Hill was coming off a season in which he shattered the Chiefs' record with 1,479 yards receiving, and his 12 touchdown receptions and dangerous ability in the run and return games were a big reason why the Chiefs won the AFC West.

"I've had a chance to talk to him on the phone, in person — spent quite a bit of time with him actually," Reid said. "He's remorseful that he's had to put all of us through what we went through. I feel bad for him. That's a sensitive situation and you know, he wants to get back and he wants to do what he needs to do to be a father and a player here, so he's very conscious of that."

Hill may have missed the Chiefs' voluntary summer practices and their mandatory three-day minicamp, but he's still been running routes and catching passes from Patrick Mahomes in impromptu workouts.

"You always stay in touch with teammates and guys you built relationships with," Mahomes said. "We stayed in touch as much as possible as well as letting that stuff handle itself. It's good to welcome him back and be part of the team and build what we want to build."

His return also takes some pressure off rookie Mecole Hardman, who was chosen in the second round of the draft with the expectation that Hill could miss some — or even all — of the upcoming season.

Just like Hill, the former Georgia standout is a speedster who can contribute in a variety of ways.

Now that Hill is back in the fold, the big question is when Chris Jones will arrive.

The star defensive tackle, who is coming off a 15½-sack season, is seeking his own long-term deal as he enters the final year of his rookie contract. Jones played hardball during the offseason by skipping the voluntary and mandatory workouts, even at the risk of a club fine, but he remains under contract and must report to training camp by Aug. 6 to earn an accrued season toward free agency.

"Our people have talked to Chris' people, there's been communication, so we'll just see whether he's here or not here," Reid said. "We obviously want him here and I think he probably wants to be here, too, but we'll see how all of that works out."

The Chiefs overhauled their defense this offseason, replacing fired coordinator Bob Sutton with Steve Spagnuolo and shifting from a 3-4 base to a 4-3 system. And given how much time Jones has missed, that means a steep learning curve whenever he reports to camp.

"You miss days, you miss days," Reid said, "but it's probably beneficial that he's here."

NOTES: TE Travis Kelce will be ready to practice this week. He was held out of OTAs and minicamp because of ankle surgery. ... LB Darius Harris (shoulder) and DE Tim Ward (ACL surgery), both undrafted free agents, will not be ready for the start of camp. ... Rookies, quarterbacks and injured players will practice this week with the veterans joining them Friday. The first full-squad workout is Saturday.