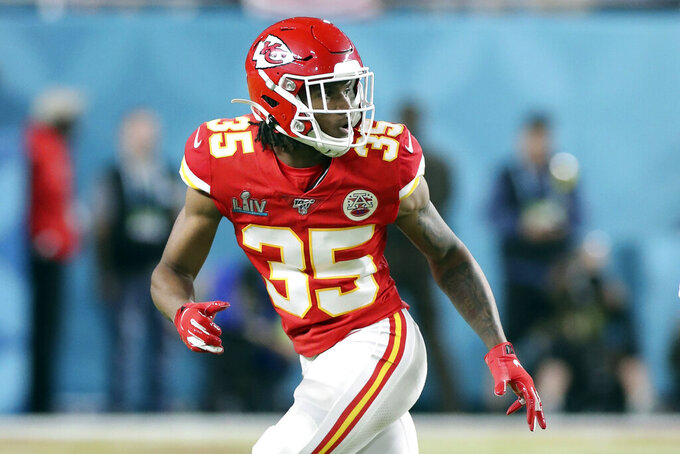 FILE - In this Feb. 2, 2020, file photo, Kansas City Chiefs cornerback Charvarius Ward (35) drops into coverage during] Super Bowl 54 against the San Francisco 49ers in Miami Gardens, Fla. The Chiefs hope to know soon whether cornerback Bashaud Breeland will be suspended to start the season, but they are confident they'll be fine either way with Ward. (AP Photo/Gregory Payan, File)

KANSAS CITY, Mo. (AP) — The Chiefs hope to know soon whether cornerback Bashaud Breeland will be suspended to start the season.

General manager Brett Veach thinks they will be fine either way.

Even before the veteran was arrested in South Carolina on multiple charges, including resisting arrest, the Chiefs worked hard to fortify one of the crucial spots in coordinator Steve Spagnuolo's defense.

They signed special teams ace Antonio Hamilton, who played for the Giants last season, and used a pair of draft picks on cornerbacks — L'Jarius Sneed was picked in the fourth round and Bopete Keyes was chosen in the seventh.

“We have a lot of young guys we think have talent,” Veach told The Associated Press. “Their learning curves are all different. Usually after rookie minicamp and OTAs you have an idea how quickly they'll be able to help, or have an educated guess. We don't have that right now because these guys have been in Zoom meetings and that's it. But there's some young guys we like here, and we'll have a good grasp of them as we put pads on and get more into evaluating.”

That won't happen for about 10 more days. The Chiefs were still in the ramp-up phase of training camp Wednesday with rookies on the practice field in padded shirts and helmets but veterans not joining them until next week.

In fact, he was so good the Chiefs signed him to a $4.5 million contract for the upcoming season while letting another cornerback, Kendall Fuller, sign elsewhere in free agency.

But just two weeks after he signed that contract, Breeland was pulled over in what became an embarrassing situation for the Chiefs. Along with resisting arrest, Breeland had alcohol in the vehicle, possession of marijuana and was found to be driving without a license. The arresting officer even said that Breeland told him he was a “marijuana enthusiast.”

Breeland, who explained his side of the story in social media posts that were later deleted, was facing suspension for a failed drug test prior to the arrest.

“We should know soon,” Veach said, "but we have enough guys that will allow for some of these guys to grow and develop."

The Chiefs also have a cornerback in Ward they know they can rely on this season.

The former undrafted free agent made the Chiefs as the fifth cornerback after a trade with Dallas in 2018, then managed to earn a starting job opposite Breeland last season. He wound up starting all 16 games, finished fourth on the team in tackles, intercepted a pair of passes and held quarterbacks to a 65.2 rating when they threw in his direction.

“Honestly, I feel like I can be one of the best young corners in the game, as long as I have confidence in myself,” Ward said earlier this week. “I'm just going to keep earning my respect this year.”

He already deserves plenty of it.

That passer rating? It was just a tick behind longtime NFL standout Richard Sherman and ranked 21st among all players in the league — two of Ward's teammates, Tyrann Mathieu and Juan Thornhill, were ahead of him. And he allowed a completion rate of just 47.2 percent, which was fourth-best in the league among players who started at least 10 games.

“I feel like our group of DBs, we're dogs. We believe in what we can do,” Ward said. “Not a lot of people give us a lot of respect outside Tyrann, but we're young and fast and we have that mentality that nobody is going to get anything on us.”