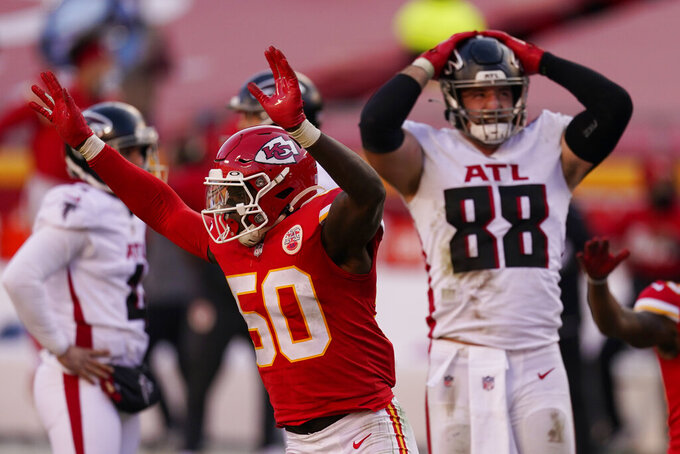 KANSAS CITY, Mo. (AP) — The Kansas City Chiefs have a delicious decision ahead of them this week: Do they play their starters in their regular-season finale against the Los Angeles Chargers, keeping them sharp for the postseason? Or do they give them an extra week of rest after clinching the AFC's No. 1 seed on Sunday.

The answer isn't quite as clear as it may seem.

Yes, the Chiefs (14-1) have enough injuries to keep the training staff busy long into the night, so those guys will gladly have an extra week to recuperate.

But for guys such as Patrick Mahomes and Tyrann Mathieu, the risk in taking that extra week off is that the Chiefs also have the AFC's lone first-round bye, and that means two weeks without a game.

In other words, rest vs. rust?

The middle of the defense is in particularly tough shape.

The Chiefs already knew they would be without Anthony Hitchens because of COVID-19 protocols and fellow linebacker Damien Wilson because of a knee injury.

But when backup Ben Niemann went down with a hamstring injury Sunday, it left them backups Willie Gay and Darius Harris to play the rest of the way in their 17-14 win over the Falcons.

“When Ben went down, it was like rookie minicamp again. It was just us out there doing drills, running plays,” Gay said. “I told him in the second quarter, we win this game, it would be something special — none of the starting linebackers and just us. Darius did a great job calling plays and doing his job.”

The offense also could use a rest.

Travis Kelce could be seen wincing through pain several times Sunday, though he still caught seven passes for 98 yards and a touchdown to set a single-season NFL record for receiving by a tight end with 1,416 yards. Tyreek Hill added four catches for 68 yards despite a hamstring injury that left him questionable on the final injury report.

Running back Clyde Edwards-Helaire was inactive because of an ankle injury sustained the prior week in New Orleans, and wide receiver Sammy Watkins left in the second half with a calf injury. His replacement, Demarcus Robinson, hauled in a go-ahead 25-yard touchdown pass from Mahomes with just under two minutes left in the game.

As for Mahomes, he would like to play against the Chargers after an uncharacteristically shaky performance Sunday. But he also has full confidence in the coaching staff to make the right decisions for another Super Bowl run.

“I'm ready to go whenever that is,” Mahomes said, “but coach Reid has done this for a long time. He knows what's best.”

Along with his yardage mark, Kelce also broke his own franchise record with his 105th catch and became the first Chiefs player with two seasons of 100-plus receptions. No other NFL tight end has multiple 100-catch seasons.

The Chiefs have weathered injuries and changes to their offensive line, but the big guys up front have struggled the past two weeks. Mahomes was just 24 of 44 for 278 yards with two touchdowns and an interception against the Falcons, and a big reason why is that he constantly had a defensive player in his face.

The Chiefs have a new punter this season for the first time since 2005, and Tommy Townsend has been making fans forget about Dustin Colquitt the last few weeks. He put three of four punts inside the 20 on Sunday while helping the Chiefs win the field-position battle all afternoon.

Time to shelve the wild plays. A couple worked early in the season, but defenses have become wise to the audacious designs. The latest failure came on fourth down Sunday, when wide receiver Sammy Watkins tried to throw a pass on a reverse to Mahomes across the field. It was intercepted by the Falcons' Keanu Neal.

Niemann and Watkins were the big injuries against the Falcons. Both should be back for the playoffs.

14 — The Chiefs have won 14 games in a season for the first time, and another win would match the 2011 Packers for the best regular season by a defending Super Bowl champ. It also would break the franchise record for consecutive wins.

The Chargers visit Arrowhead Stadium on Sunday. They lost to the Chiefs 23-20 in Week 2.