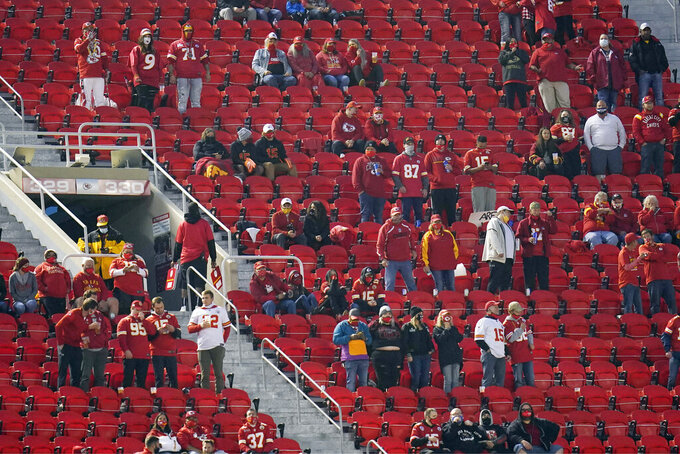 FILE- In this Thursday, Sept. 10, 2020, file photo, fans watch during the first half of an NFL football game between the Kansas City Chiefs and the Houston Texans in Kansas City, Mo. Ten fans who attended the Chiefs game last week have been told to quarantine after one fan tested positive for COVID-19, Kansas City health officials announced Thursday, Sept. 17, 2020. (AP Photo/Jeff Roberson, File)

A person who watched the game from the group's box in Arrowhead Stadium's lower level tested positive the day after the game, the health department said.

The health department and Chiefs organization worked together to track down those who had contact with the person.

The Chiefs said in a statement Thursday that contact tracing protocols it had in place showed the people involved were wearing masks when they entered the stadium, as required by the organization.

The contact tracing allowed the team to identify those sitting with the infected person, service staff who might have had contact with the person, and others near the person when he or she entered the stadium, the team said.

The Chiefs opened the NFL season last week against the Houston Texans with only 22% capacity — about 17,000 fans — at Arrowhead. Fans were required to wear masks and social distance and other safety precautions were in place.