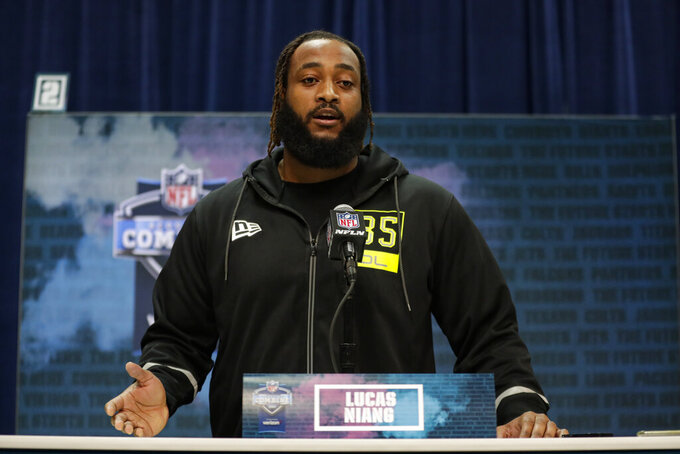 KANSAS CITY, Mo. (AP) — The Kansas City Chiefs spent the past few weeks conducting plenty of virtual chats with Willie Gay Jr. and those around him, drilling into a series of incidents that caused the Mississippi State linebacker to play just five games last season and enter the NFL draft with several red flags.

General manager Brett Veach and coach Andy Reid logged off those chats comfortable with what they heard.

So with their initial pick of Day 2 on Friday night, the Chiefs chose the play-making Gay at No. 63 overall to bolster a linebacker group in need of an upgrade. The Super Bowl champs lost Reggie Ragland to free agency, and Gay has the coverage chops and sideline-to-sideline tackling ability to step into an immediate starting role.

“We're coming off a championship-caliber team but you want to get better. Where can you strengthen the team?" said Reid, whose team chose LSU running back Clyde Edwards-Helaire with their first-round selection, then grabbed TCU offensive tackle Lucas Niang in the third round to provide some depth. “(Gay) was the linebacker we wanted and it was kind of weird how it all worked out.”

The pick comes with a certain amount of risk, though.

Gay was suspended eight games by the NCAA as part of an academic fraud investigation that swept up 10 players total and led to severe sanctions for the program. He also was ejected from the Egg Bowl against Ole Miss in 2018 after two he was given two unsportsmanlike conduct penalties, and he was the teammate that allegedly hurt Mississippi State quarterback Garrett Shrader in a practice fight leading up to last season's Music City Bowl.

“You know, they asked me about everything: the quarterback situation, the suspension for the academic thing. I'm not saying it wasn't my fault. It was something I could have avoided,” Gay said. “I dealt with the consequences of it. It made me a better man, a better person. It made me appreciate the game of football. It made me love football even more.”

The Chiefs have plenty of confidence in their strong locker room culture and Reid's leadership, leading them to select several players with baggage over the years. But the results have been mixed. The results have been mixed. Wide receiver Tyreek Hill and tight end Travis Kelce turned into stars, landing lucrative long-term contracts; running back Kareem Hunt and cornerback Marcus Peters instead were considerable headaches during their time in Kansas City.

“We did our homework on everything,” Reid said. “We felt very comfortable taking him at that spot, and it also helps to have the people in the locker room we have with Tyrann (Mathieu) and Frank (Clark). They'll take him under their wing. That whole linebacking room is a tight group. They'll take him in and make sure he's in the right hands.”

The Chiefs are bringing back 20 of 22 starters from their Super Bowl championship team, but that stability comes at a significant cost. They franchised Pro Bowl defensive tackle Chris Jones and signed cornerback Bashaud Breeland and wide receiver Demarcus Robinson to one-year contracts, a series of moves that put pressure on their salary cap.

Veach carved out some room by restructuring contracts for defensive end Frank Clark, offensive lineman Laurent Duvernay-Tardif and wide receiver Sammy Watkins — three of the most expensive players on the roster.

Still, the Chiefs know they will have to give quarterback Patrick Mahomes a potentially record-setting payday in the coming months. That combined with the contracts already on the books left Veach and Reid searching for players who could make a significant impact in the coming years while on their relatively paltry rookie contracts.

Edwards-Helaire should become the immediate backup to talented but injury-prone starter Damien Williams, and Gay should have a chance to play alongside Anthony Hitchens and Damien Wilson in their 4-3 defense.

Niang is a developmental player that the Chiefs believe could play just about anywhere along the offensive line.

The biggest surprise wasn't that the Chiefs picked any of those guys but that they didn't target a cornerback. They still have holes in the defensive backfield after losing Kendall Fuller and Morris Claiborne to free agency, and high-end targets such as Louisiana Tech's Amik Robertson and Virginia's Bryce Hall were still on the board.

“I think we stick to working on our team and our roster,” Veach said, “and I think having an opportunity to win a Super Bowl, I don't think we're competing against any one team. We're trying to find players that come in and play right away.”