Chiefs holding themselves to higher standard this season 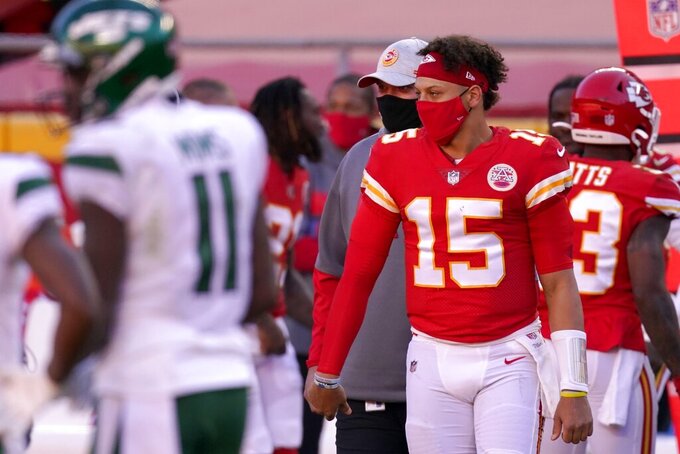 KANSAS CITY, Mo. (AP) — The Kansas City Chiefs were nearly three-touchdown favorites against the New York Jets on Sunday, and they figure to be considerable favorites when the Carolina Panthers visit Arrowhead Stadium next week.

Such massive expectations don't seem to bother them.

"It's all about us, all about our standard," Chiefs safety Tyrann Mathieu said after the 35-9 victory over the Jets that pushed the Chiefs to 7-1 on the season. “It's about how we live, how we practice, how we are capable of playing. You put a lot of emphasis on the teams you're playing but it's about us, whether we're going to show up with the right attitude. We put in some great work throughout the week. Just believe in the process.”

It paid off with a Super Bowl title last season.

It was never more on display than Sunday, either. The Chiefs raced to a 21-9 halftime lead over the winless Jets, but they never put the game on cruise control. They continued to execute on offense into the fourth quarter, when Patrick Mahomes joined several other starters on the bench, and their defense held the Jets to about 60 yards and no points.

So much for playing down to the competition. Or taking it easy on an overmatched foe.

“Listen, coaches are always on guard for all that,” Chiefs coach Andy Reid said. “You say it a million times. You're always going to say it. That's how coaches are wired. I remind them of that, but I haven't really worried about it with them because these guys are pretty focused. They enjoy playing with each other. And listen, if you're going to be good at the end of the year, you have to take care of business during the year. Every game counts.”

The Chiefs' run-pass option attack was spot-on against the Jets. Most teams have been dropping deep into coverage, and that has led to more running attempts. But the Jets tempted Mahomes to throw the ball downfield, and the Super Bowl MVP was merely 31 of 42 for 416 yards with five touchdowns and no interceptions.

“I just think the alignment of the defenders, they were really focused on stopping the run, which they did a good job of doing,” Mahomes said. “The guys were getting open and I was putting it in their hands.”

The flip side of the downfield success is the Chiefs averaged just 2.5 yards on 20 carries. But when the offense still puts up nearly 500 yards, it's hard to quibble with Clyde Edwards-Helaire, Le'Veon Bell and the rest of the running backs.

Rookie punter Tommy Townsend earned a spot on the highlight reels for his throw on a fake punt early in the game, but another big moment against the Jets came much later. Townsend neatly placed a punt inside the 5-yard line that the Chiefs should have covered, a sign that his big leg is starting to show some accuracy, too.

The Chiefs still aren't getting production from backup tight ends Deon Yelder and Nick Keizer, each of whom caught one pass for 5 yards against New York. That may not be a big deal while Travis Kelce is healthy, but an injury or illness to him could be devastating. Kelce had eight catches for 109 yards and a score on Sunday.

The Chiefs came out of the game without any new injuries. They played without wide receiver Sammy Watkins (hamstring) and right tackle Mitchell Schwartz (back) and it remains unclear when they will return.

The Chiefs play the Panthers (3-5) on Sunday before getting a week off. Their bye comes at a good time with the Las Vegas Raiders, the only team to have beaten them this season, on deck the following week.