Chiefs' Honey Badger having best season of his career 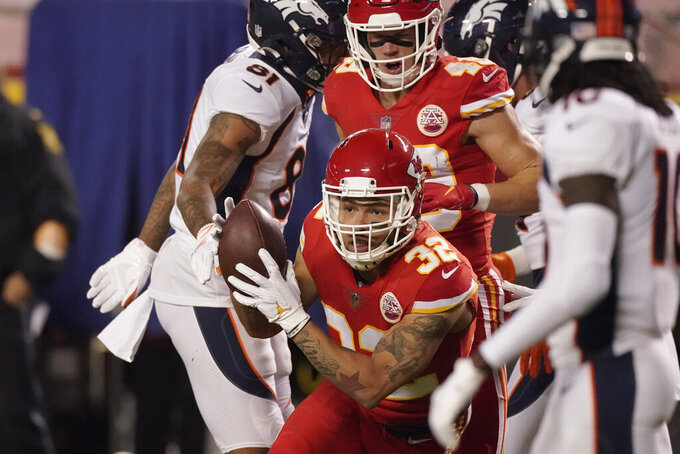 KANSAS CITY, Mo. (AP) — The statistics alone suggest that the Chiefs' Tyrann Mathieu is having the finest season of his eight-year NFL career.

The energetic safety nicknamed “Honey Badger” already has a career-high six interceptions, including one in each of the past three games. Mathieu had his second career pick-6 against the New England Patriots earlier this season, he has defended nine passes despite rarely getting balls thrown his way, and he's second on the team in solo tackles.

Yet his full value isn't realized until you see him interacting with teammates in the locker room, on the practice field and during pregame stretching. It's at that point you notice his upbeat personality, his never-good-enough attitude and his raw desire to be the best at his position, which seems to spread like a contagion to everybody else on the team.

“If you've ever seen the Badger out at practice, that dude is as intense as it gets. We just follow his lead,” Chiefs safety Dan Sorensen said. “Every day, there is something that sets him off and he's fired up about something. That gets the rest of us going. It's fun to have guys like that who care about practice, can come in every day and compete, get the juices going and get the guys going. Without fail, he brings it every day.”

To be sure, Mathieu is one of the loudest of vocal leaders on the field, taking that mantle from predecessors such as Justin Houston and Eric Berry and putting his own unique spin on leadership.

It's hard to be a leader without setting an example, though. That's where the production comes into play. His ability to play man-to-man defense or zone, blitz or cover, makes him a matchup nightmare for opposing coaches.

“He's just a tremendous, instinctive football player, no matter what he's doing,” Broncos coach Vic Fangio said. “Whether he's playing a deep zone, whether he's covering somebody in man, whether he's blitzing — he's one of the most versatile and instinctive defensive backs that I've seen in the last 10 years or so that he's been around.”

It's sometimes hard to believe it hasn't been that long; Mathieu plays with a certain veteran presence, utilizing a vast bank of knowledge to usually put himself in the right place at the right time. A perfect example came last Sunday in Miami, where he was chasing coverage deep downfield and was positioned perfectly to catch a deflected pass for an interception.

“Just trying to catch the ones that are catchable,” Mathieu said of the gifted pick afterward.

“He's such a good player,” Broncos offensive coordinator Pat Shurmur said, “whether he's pressuring, whether he's covering, whether he's involved in making tackles in the run game. he can do everything, and he's got great instincts. I think that's what makes him unique. And he's just an outstanding playmaker.”

He's a pretty good trash-talker, too. It didn't matter to Mathieu — generously listed at 5-foot-9, 190 pounds — that he was picking a fight with a much bigger man when he started jawing last week with Dolphins offensive lineman Solomon Kindley — not-so-generously listed at 6-4, 340. In fact, it took players from both teams to tear him away.

“This is football. This is the highest level of competition, right?” Mathieu said. “Like, every play is important and every rep is going to get coached, and you never want to be that guy that's not showing the fight.”

Perhaps more than sacks or interceptions, those are the moments that can fuel an entire defense in the middle of a game.

“When you have the Honey Badger out there yelling and screaming and flying around the field, and Frank Clark doing the same, Chris Jones — we're going the best-against-the-best right here at our practices,” Chiefs quarterback Patrick Mahomes said. “And I promise you, we're going hard every single rep, and there's a lot of fire and passion out on that field.”

NOTES: OLs Eric Fisher and Mike Remmers missed practice Wednesday with sore backs. LB Damien Wilson remained out with a bruised knee. ... WR Byron Pringle (ankle) returned to practice for the first time since landing on injured reserve on Nov. 24, beginning a three-week practice window before he must be activated. OL Mitchell Schwartz (back) also is eligible to come off IR this week but coach Andy Reid said he did not practice Wednesday.