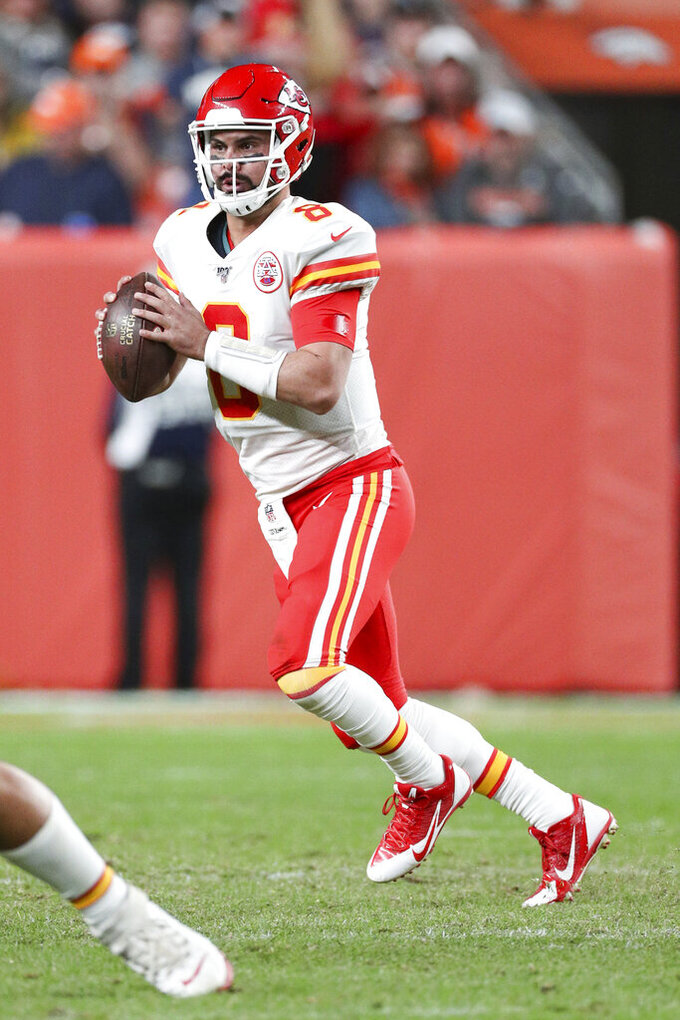 Kansas City Chiefs quarterback Matt Moore (8) looks downfield for a receiver in an NFL game against the Denver Broncos, Thursday, Oct. 17, 2019, in Denver. The Chiefs defeated the Broncos 30-6. (Margaret Bowles via AP) 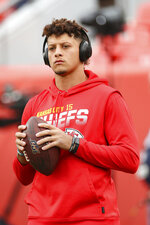 KANSAS CITY, Mo. (AP) — Chiefs coach Andy Reid was unwilling to rule out quarterback Patrick Mahomes from their upcoming game against Green Bay, even though it's been less than a week since the reigning league MVP dislocated his kneecap in a victory in Denver.

Regardless of whether he plays Sunday night, that's good news for the Chiefs.

The initial thought was that Mahomes could miss up to six weeks, but X-rays and an MRI exam returned the best possible result. So while the Chiefs are moving ahead as if Matt Moore will be under center against the Packers, the starting job may not be his as long as expected.

"I mean, he attacks everything. That's how he goes about it," Reid said of his young franchise quarterback. "I think it was important that he hear from the doctors and the trainers that he could proceed and things would be OK as he goes forward, so he's full-steam ahead."

While most of the Chiefs were given a couple days off after their victory Thursday night, Mahomes was back at the facility over the weekend getting treatment on his knee. That has continued right into their first practice for the Packers on Wednesday, when Mahomes was expected to do some throwing.

Reid said that Moore, the former quarterback in Carolina and Miami, would take the majority of reps as the starter. But he indicated that Mahomes could get a few of them, and that's a positive sign that one of the league's prolific passers could be back in the next couple of weeks.

The Chiefs promoted rookie Kyle Shurmur from the practice squad to serve as a potential backup.

"Everybody is different," Reid said, "and really the doctors are telling Patrick what he can do along the way, within reason. He's been doing that and doing it well. That's probably what I would tell you. We just have to wait and see how it goes, but that's why we're doing what we're doing."

By that, he means preparing Moore to start a primetime showdown between division leaders who are both targeting a spot in the Super Bowl. The Packers roll in at 6-1 and fresh off a blitzing of the Chiefs' bitter rival, Oakland. Kansas City is coming in at 5-2 and fresh off a blowout win over the Broncos.

It might not be the showdown between Mahomes and Packers counterpart Aaron Rodgers that everyone was anticipating, but it's still a marquee matchup between two of the league's storied teams.

And the Chiefs don't believe their chances are any worse with Moore leading them out.

"Both of those guys are great quarterbacks, and Matt's been in the league a long time," rookie Chiefs wide receiver Mecole Hardman said. "We know what Pat can do. Both can get the job done."

Notes: DE Frank Clark (neck) and LB Darron Lee (illness) did not practice Wednesday. CB Kendall Fuller (broken thumb) also missed the workout. ... LT Eric Fisher (groin surgery) was back at practice for the first time since Week 2. "He's going to give it a whirl," Reid said. "See how he does." ... WR Sammy Watkins (hamstring) appears on track to play. He practiced last week before missing his second consecutive game. "He's moving around well enough to be out there at practice, and we'll just see how it all goes," Reid said. "I put him in that group of guys that are practicing but banged up."