Chiefs keep gambling by doling out another big-money deal 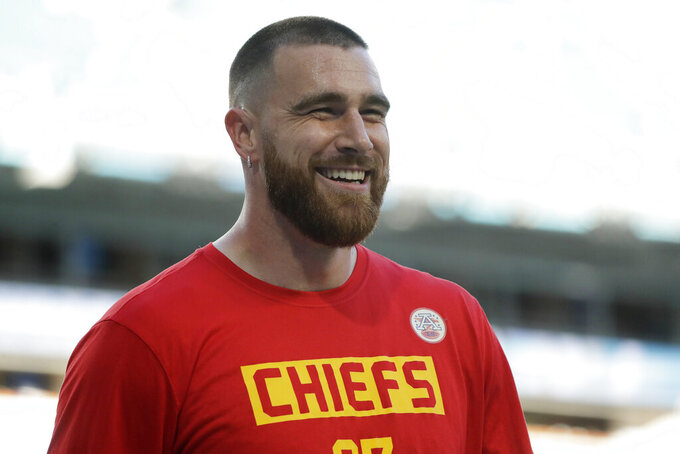 FILE - Kansas City Chiefs' Travis Kelce smiles before the NFL Super Bowl 54 football game between the San Francisco 49ers and Kansas City Chiefs Sunday, Feb. 2, 2020, in Miami Gardens, Fla. The Chiefs and the star tight end have agreed to a four-year, $57.25 million contract extension that will keep him with the Super Bowl champions through 2025, a person familiar with the contract tells The Associated Press. The person spoke on condition of anonymity Thursday because the deal has not been announced. (AP Photo/Wilfredo Lee)

KANSAS CITY, Mo. (AP) — The Chiefs had just finished their first padded practice of training camp Friday when safety Tyrann Mathieu was asked about the long-term contract signed by Travis Kelce, which ensured he would remain in Kansas City through the 2025 season.

“I think Travis is a special talent,” Mathieu replied. “He reminds me a lot of Larry Fitzgerald.”

That would be the longtime Cardinals wide receiver, who was a teammate of Mathieu during his time in Arizona. And while comparing a likely Hall of Fame wide receiver to a tight end on his own path toward Canton may seem odd, the reality is the numbers that Kelce has put up during his seven-year career match up quite nicely with what Fitzgerald accomplished.

Kelce is being paid like a wide receiver these days, too.

“The competition that (Fitzgerald) provided me coming into the league, me coming to Kansas City — Travis gives me that same kind of competition day-in and day-out,” Mathieu said. “He makes me hone in on my craft. That's the only way you can compete against those guys with that kind of ability.”

Kelce missed most of his rookie season with a knee injury, but he has played 95 games over the past six seasons with 507 catches for 6,465 yards and 37 touchdowns. He also has four consecutive 1,000-yard receiving seasons, has been voted to six straight Pro Bowls, twice earned an All-Pro nod and just helped the Chiefs win the Super Bowl.

By comparison, Fitzgerald appeared in 92 games over his first six seasons with 523 catches for 7,067 yards and 59 scores — and also had four 1,000-yard seasons over that span. Those numbers are exceptional for a wide receiver, let alone a tight end, and Fitzgerald didn't have the added burden of being a glorified offensive lineman on most running plays.

No wonder the Chiefs were eager to keep Kelce around.

The Chiefs and his representatives agreed to the four-year, $57.25 million extension on Thursday. It was the third major deal signed by general manager Brett Veach this offseason to keep the Chiefs' core intact: quarterback Patrick Mahomes signed a record-setting 1-year extension that could ultimately pay him a half-billion dollars, while Pro Bowl defensive tackle Chris Jones signed a four-year, $85 million deal that kept him from playing on the franchise tag.

There are only 13 wide receivers in the league that will be making more than Kelce, based on average salary, one of of those is teammate Tyreek Hill. He signed a three-year, $54 million extension last September.

“We all knew and trusted the front office — all the guys — to keep the core. We trusted they would be able to make it make sense for all the players, which they did,” Kelce said. “They held up their end of the bargain.”

These pricey contracts don't come without risk. And in Kelce's case, the Chiefs are making two significant gambles.

The first is that the salary cap will continue to rise over the next five years, allowing them to make good on the deals they've given to some of their premier players. It has grown from $155.27 million in 2016 to $198.2 million this season, but there is no certainty it will continue to increase at the same rate going forward.

The second is that Kelce will continue to produce as he ages. He turns 31 in October, which means he will be 35 during the final year of his contract. There are exceptions to the rule — Fitzgerald is one of them — but most players begin tailing off at that point in their career, either because injuries have mounted or their natural speed has diminished.

The Chiefs have placed their bets, though, and now will see whether they will pay off.

“Travis still comes to work wanting to get better,” Chiefs coach Andy Reid said, “so you love that part. He brings energy every day. I've been lucky to coach he and his brother, and they're both that way.

"They're wired where they want to be the best. But they enjoy playing the game like no other.”