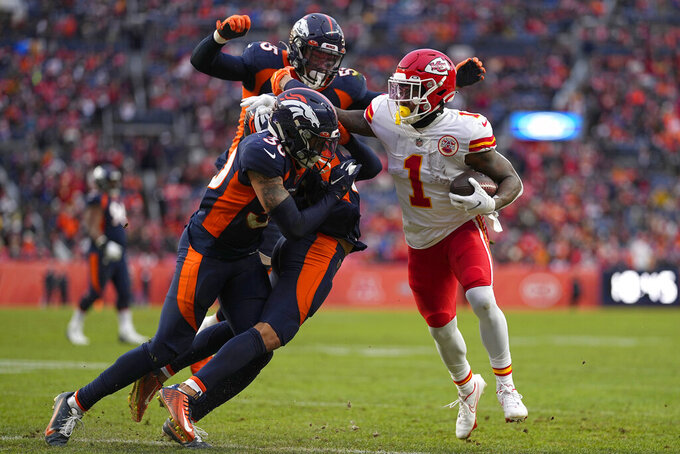 The journeyman running back had been passed over plenty of times before.

Start with those early years in Minnesota, when he backed up Adrian Peterson. An injury to the star running back gave McKinnon a chance, only for the Vikings to give Matt Asiata the starting nod the following week.

Or the later years in Minnesota, when Dalvin Cook was given the top job and tore ligaments in his knee. McKinnon was passed over by Latavius Murray that time, hastening his exit to San Francisco in free agency.

So even though the Chiefs had Clyde Edwards-Helaire atop the depth chart, and Darrel Williams behind him, McKinnon chose to sign with Kansas City after three injury-filled years with the 49ers. He was confident that he would eventually have an opportunity to make a difference, and when that happened, it would be on a Super Bowl contender.

“When you get in a place like that and you are fighting and battling back, the only thing you can do is just put your head down and keep working,” McKinnon said, “and know in the back of your mind that the hard work is going to pay off.”

With Edwards-Helaire still sidelined by a shoulder injury, and Williams dealing with a sore toe, McKinnon got the nod in the wild-card round against Pittsburgh. He responded by carrying 12 times for 61 yards, catching six passes for 81 yards and a score, and gaining more yards from scrimmage than anybody else in the playoffs last weekend.

“I've seen it from training camp on that he's a playmaker,” Chiefs quarterback Patrick Mahomes said. "I mean, there's a reason he's been a playmaker in this league the last few years here. Obviously, he's dealt with injuries in his career, and he dealt with a little bit of injury this season, but he's kept his mindset right. He kept working hard. And I knew with some of the other guys kind of being down and dinged up, he would step up and fill in nicely.”

He's not the only unsung player on a team that features plenty of superstars.

— Byron Pringle was an undrafted free agent coming out of college that earned his stripes on the practice squad and elbowed his way into the lineup. He had five catches for 37 yards and two touchdowns in the 42-21 win over the Steelers.

— Mike Danna was a fifth-round pick who had one of the Chiefs' two sacks and two quarterback hits against Pittsburgh.

— L'Jarius Sneed was a fourth-round pick who led the Chiefs in tackles against Pittsburgh, despite playing in the defensive backfield, and helped to blanket wide receivers Diontae Johnson, Chase Claypool and JuJu Smith-Schuster.

Still, it was McKinnon had shined most brightly. His big game against the Steelers followed up a nice performance in their regular-season finale in Denver, when he reached the end zone for the first time with the Chiefs, and puts McKinnon in a position to get just as much work when the Bills arrive on Sunday for a rematch of last season's AFC title game.

“He gives you all kinds of confidence just by the way he handles himself,” Chiefs coach Andy Reid said. “He's a confident guy, he works hard, takes care of himself — smart — and he's a good athlete. So you felt like if he got in there, he would do a good job. He can catch the football. He can run it. He's got good vision. So it was good to get him in there.”

NOTES: Williams did not practice Wednesday while Edwards-Helaire practiced in a limited capacity. “He moved around well. We'll see tomorrow and how he back to backs these things,” Reid said. “We'll just see how he does going forward.” ... CB Rashad Fenton (back) also did not practice Wednesday. ... The Chiefs released CB Josh Jackson, TE Nakia Griffin-Stewart and LBs Shilique Calhoun and Elijah Sullivan from their practice squad.