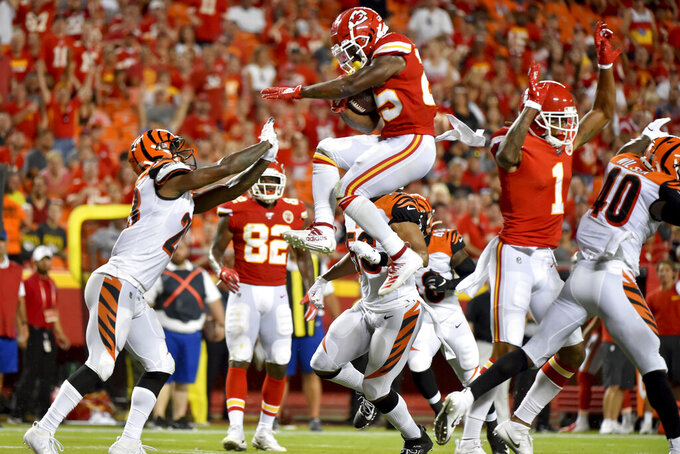 Kansas City Chiefs running back Darwin Thompson, center, is about to land on Cincinnati Bengals cornerback Darius Phillips, left, after trying to vault over Bengals safety Brandon Wilson, right, a during the second half of an NFL preseason football game in Kansas City, Mo., Saturday, Aug. 10, 2019. (AP Photo/Ed Zurga)

ST. JOSEPH, Mo. (AP) — Of all the things the Kansas City Chiefs wanted to accomplish during their three-week getaway to training camp at Missouri Western, returning home with everyone healthy probably topped the list.

Not only did they accomplish that, they actually improved their roster depth.

With the signing of cornerback Morris Claiborne to a one-year prove-it deal, the Chiefs bolstered what was undoubtedly the weakest position group on the team. And when you consider the only big injury of camp was to backup cornerback Keith Reaser, the Chiefs are heading back to Kansas City in good shape.

"Football is one of those games where you have to have a little fortune when it comes to being healthy," said Chiefs tight end Travis Kelce, who arrived early after offseason ankle surgery but has been full-go in camp. "It's just the way the game is played. There's a lot of psychical guys out here and playing football and playing it the right way, you have to have some fortune with that."

That's not to say there haven't been plenty of nagging ailments.

Defensive end Frank Clark, whom the Chiefs acquired from Seattle and lavished with a $104 million extension, has missed time with a hip injury and an illness. Wide receiver Gehrig Dieter may have missed out on a chance to earn one of the final roster spots because of a lingering back problem.

Right tackle Mitchell Schwartz, cornerback Bashaud Breeland and a handful of other guys have missed time with minor issues, but none is expected to carry over into the regular season.

Of course, the regular season is still three weeks away.

The Chiefs wrapped up their final practice in St. Joseph on Thursday, then head to Pittsburgh for their second preseason game on Saturday. They'll return to their own practice facility in Kansas City next week for the final push toward their real opener Sept. 8 in Jacksonville.

"I think we're right where we need to be," Chiefs offensive coordinator Eric Bieniemy said. "I think the guys came out and accomplished the goals that we need to accomplish. The most important thing that we wanted to do is win last week. I thought the guys did a great job of that.

"Now," Bieniemy continued, "the thing that we're focusing on, because we put it on tape, is just the details and the fundamentals, just making sure that we're focused on that moving forward."

The Chiefs certainly performed well in their preseason opener against Cincinnati, rolling to a 38-17 victory. Their first-team offense played just one series, but the backups moved the ball up and down the field against the Bengals, while a revamped defense kept them in check most of the night.

They even had some young guys shine, both in practices and in their preseason game.

Sixth-round draft pick Darwin Thompson is making a move toward the No. 2 running back job behind Damien Williams, the injury-prone starter. Quarterback-turned-tight end Blake Bell has taken a grip on the backup job at his position. Second-round pick Juan Thornhill has spent most of camp running with the first-team defense, and could start at safety alongside Tyrann Mathieu in the opener.

"Everyone that comes in here is going to be coached up, they're going to learn, and they're going to compete," Chiefs wide receivers coach Greg Lewis said. "That's how we roll in our room and this year is no different from the competition level, it's just guys are out there making plays."

In fact, Reid said the competition level at this year's camp has been so high that many guys who are cut will be picked up by other teams. Those decisions won't need to be made until Aug. 31.

"That's why you really want to maximize how much you play those young guys, if you can, and still get your veteran guys ready," Reid said. "But you want to try not to miss on the other guys and keep the best players you possibly can. That's what we're doing."

NOTES: DE Frank Clark and WR Sammy Watkins returned to practice Thursday after illnesses. ... WRs Gehrig Dieter (back) and Davon Grayson, DE Michael Hunter (groin) and TE John Lovett (shoulder) will not play at Pittsburgh. ... Reid said that starters will play most of the first half against the Steelers. Backups will get the third quarter and everyone else will play in the fourth.