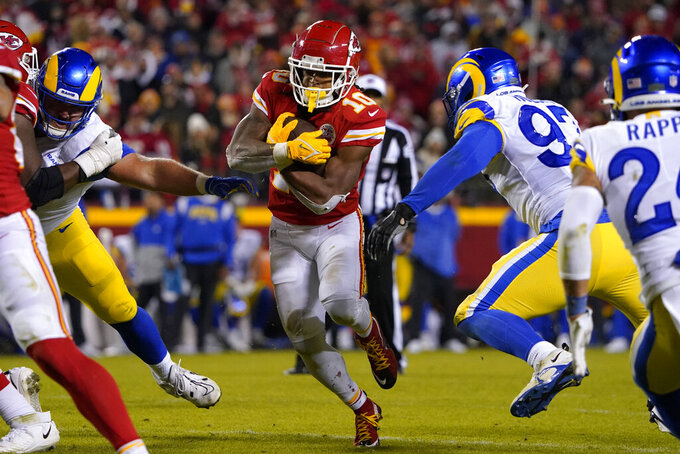 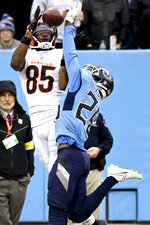 CINCINNATI (AP) — Bengals safety Vonn Bell said the timing of this season's game against the Chiefs feels a lot like last season when the teams met in two high-profile games in the span of a month.

The Bengals beat the Chiefs 34-31 in Cincinnati on Jan. 2 to clinch the AFC North title. In a rematch in Kansas City in the AFC championship game on Jan. 30, the Bengals earned a trip to the Super Bowl with a 27-24 overtime win. Like in the previous matchup, the victory margin was an Evan McPherson field goal.

“It feels like we keep on seeing them at the right time,” Bell said. “But it's just the nature of the business. It's two explosive teams trying to win at the right pivotal time going into December. And that's where the ballgames are won, and seasons are won and lost.”

The Chiefs (9-2) behind Patrick Mahomes again have a good grip on the AFC West and are playing for the No. 1 seed and first-round bye in the playoffs.

The 26-10 win over the Los Angeles Rams was their fifth straight, giving them at least one five-game winning streak in each of the past 10 seasons.

The Bengals (7-4) stumbled out of the gate this season, losing their first two but have won seven of the past nine, including three in a row for the first time this season.

Quarterback Joe Burrow figured out how to win without his best receiver Ja'Marr Chase and featured back Joe Mixon. Chase, who has missed the past four games, could be back for Sunday's game. Mixon, who was in concussion protocol, is questionable.

“It goes down to both the quarterbacks,” Cincinnati receiver Tyler Boyd said. “I think these are the two best quarterbacks in the league. At least in the top three. It's going to be a high-powered offensive game.”

Mahomes, who welcomed his second child on Monday, has been outstanding, compiling an NFL-leading 3,585 passing yards and 29 touchdowns.

The Chiefs have the top scoring offense in the league, averaging nearly 30 points per game.

“I don't know if it means more,” Mahomes said of the rematch with Cincinnati. “I think you have to keep stuff in perspective. It's a brand new season. Any time a team beats you before, you want to beat them, especially when they beat you in a game like they did to go to the Super Bowl.”

Chiefs wide receiver JuJu Smith-Schuster, who returned last week after missing a game with a concussion, was out of practice early this week with an illness. That further depleted a group still missing Kadarius Toney to a hamstring injury and with Mecole Hardman on injured reserve with an abdominal problem. The Chiefs added depth this week by signing former Raiders wide receiver Bryan Edwards to the practice squad, but he’s unlikely to be ready to help by Sunday.

Chase is back at practice for the second consecutive week and said he is ready to play on Sunday. How much he’ll play is the question.

Chase told reporters on Wednesday that he suffered a hairline fracture of his right hip when he hyperextended his leg making a touchdown catch at New Orleans on Oct. 16. He tried to play against Atlanta the next week but had to leave the game.

Chase had 605 receiving yards and six touchdowns in seven games until going out with the injury.

Chris Jones triggered a $1.25 million bonus last week when the Chiefs defensive tackle picked up his 10th sack of the season, and he still has six regular-season games to go. Jones also has at least a half sack in six straight games, tying the third-longest streak in franchise history. He set the record with 11 straight in 2018.

Burrow wasn't in the mood this week to reminisce about the first win over the Chiefs last season in which he brought Cincinnati back from a 28-17 halftime deficit. The win touched off a raucous locker room celebration.

“Oh man, (that) feels like so long ago,” Burrow said Wednesday. “That was the day we won the division, but that's so far behind us now. It was almost a year ago now. So it is what it is — last year happened and we're on to this year.”