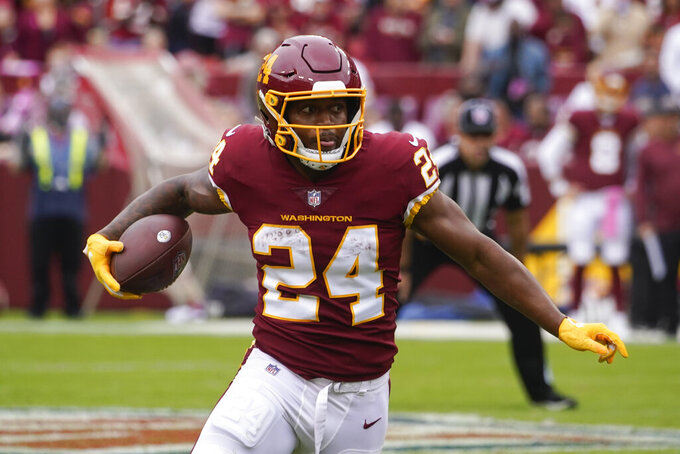 Washington Football Team running back Antonio Gibson rushes the ball in the first half of an NFL football game against the New Orleans Saints, Sunday, Oct. 10, 2021, in Landover, Md. (AP Photo/Al Drago)

OPENING LINE: Chiefs by 6½, according to FanDuel Sportsbook.

TURNOVER DIFFERENTIAL: Chiefs minus-7; Washington minus-3.

CHIEFS PLAYER TO WATCH: RB Darrell Williams will get his first career start after Clyde Edwards-Helaire went on injured reserve with a sprained knee ligament. Williams has been a key backup the past four years for the Chiefs, appearing in 39 games and helping them to back-to-back AFC titles.

WASHINGTON PLAYER TO WATCH: DE Chase Young picked up his first sack of the season last week against New Orleans, and the pass rush is finally starting to make an impact. Even if Young gets double- and triple-teamed, his presence should open up things for fellow first-round picks Montez Sweat, Jonathan Allen and Daron Payne to put pressure on Kansas City QB Patrick Mahomes.

KEY MATCHUP: Mahomes vs. Washington's secondary. Saints QB Jameis Winston picked apart Washington cornerbacks William Jackson III and Kendall Fuller and others, who revealed they were unprepared for a Hail Mary throw at the end of the first half. They'd better be prepared for what Mahomes' bag of tricks.

KEY INJURIES: Chiefs WR Tyreek Hill (quad), LG Joe Thuney (broken hand), CB Charvarius Ward (quad), DT Chris Jones (wrist), LB Anthony Hitchens (knee) and TE Blake Bell (back) missed practice earlier in the week. Most of them are expected to play Sunday. ... Washington is expected to again be without 2020 All-Pro RG Brandon Scherff because of a knee injury and could also be missing rookie RT Sam Cosmi after injuring his left ankle against the Saints. ... WR Curtis Samuel is a question mark every week because of a lingering groin injury. ... Washington RB Antonio Gibson continues to play through a shin injury that he said includes a stress fracture.

SERIES NOTES: Kansas City has won the past seven meetings. Washington's last victory against the Chiefs came in 1983, the season after the franchise's first of three Super Bowl titles and before Ron Rivera made his NFL debut as a player. ... Kansas City routed Washington 45-10 in the Chiefs' last visit to FedEx Field in 2013. ... Rivera is the fourth former assistant of coach Andy Reid the Chiefs have faced in the first six games. They lost to John Harbaugh's Ravens and Sean McDermott's Bills and beat Kevin Stefanski's Browns.

STATS AND STUFF: Reid at 223 needs four wins to pass Hall of Fame coach Curly Lambeau for fifth most in the regular season. ... Kansas City has won nine of 10 road games dating to the start of last season. ... Mahomes leads the NFL with 16 touchdown passes. He has thrown at least one in a league-leading 30 consecutive games. ... This is Mahomes' first career game against Washington. ... Travis Kelce has caught at least one pass in 115 consecutive games for Kansas City. He is second among tight ends with 369 yards receiving this season. ... Chiefs S Tyrann Mathieu has 12 picks in the past three seasons, the second most in the NFL over that span. ... Hill (62) needs two TDs to pass Jamaal Charles for third most in franchise history. He needs six catches to pass Otis Taylor (410) for fifth on the club’s career list. ... Chiefs K Harrison Butker has made 15 consecutive field goals. ... Washington is last in the league in attendance. The team is averaging just over 51,000 fans through the first three home games this season. ... Washington QB Taylor Heinicke has thrown for 1,208 yards, eight touchdowns and five interceptions since taking over for Ryan Fitzpatrick in Week 1. ... Gibson ran for two TDs last week against the Saints. ... WR Terry McLaurin has made at least four catches in seven consecutive games. ... TE Ricky Seals-Jones led Washington with five receptions last week in the absence of injured starter Logan Thomas. ... Young's first sack of the season was also a strip sack of Winston, with the fumble recovered by Payne. ... LB Cole Holcomb picked off Winston and led Washington with seven tackles last week.

FANTASY TIP: Everyone on either offense is a must start, no one more so than Kelce, who should be a matchup nightmare for Washington. Hill should also present plenty of problems.