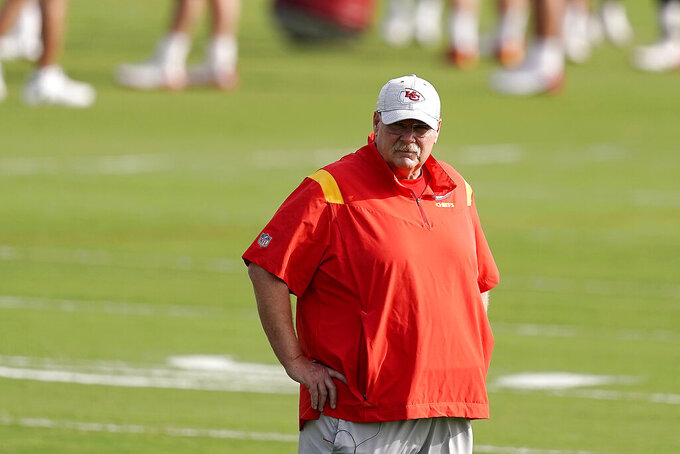 ST. JOSEPH, Mo. (AP) — Patrick Mahomes will start the Kansas City Chiefs' preseason opener in Chicago on Saturday, bucking a trend across the NFL of coaches sitting their starting quarterbacks for the first of their three exhibition games.

Chiefs coach Andy Reid said Thursday he would stick to his usual routine of having each of the four quarterbacks in camp play for a quarter of the preseason opener. And while he acknowledged the number of snaps could change based on the way the game is going, Reid thinks it's important for everybody — stars and backups alike — to get onto the field.

“I think it's good to get the juices going, get yourself out there, even if it's a limited amount of plays,” Reid said after the Chiefs wrapped up Thursday's practice at Missouri Western State University.

“I'm not saying it's wrong what others are doing,” Reid said. “That's just where I'm at.”

The Raiders sat Derek Carr and the Jaguars played without Trevor Lawrence in last week's Hall of Fame Game, though that's typical given the game occurs a week earlier than the rest of the preseason openers. But plenty of teams are choosing to sit their starting quarterbacks this week, too, rather than risk an injury by subjecting them to unnecessary hits.

The Patriots planned to sit Mac Jones for their preseason opener against the Giants on Thursday night, when the Ravens were expected to have Lamar Jackson wearing a headset rather than a helmet for their game against the Titans.

Others sitting out include the Cowboys' Dak Prescott, Bills starter Josh Allen and the Buccaneers' Tom Brady, who is beginning an 11-day absence to deal with “personal things.” Aaron Rodgers also is unlikely to play for the Packers given that the four-time and reigning league MVP has not played in a preseason game for Green Bay since 2018.

“I like to get in there and get hit like, on time,” said Mahomes, who has played the preseason opener every season but 2020, when there wasn't any because of the pandemic. “Once you get hit one time, you see what it is. Then you're good to go."

Mahomes threw only two passes in last year's preseason opener against San Francisco before giving way to backup Chad Henne and the rest of the Kansas City quarterbacks. Mahomes had more extensive time in the second and third games.

When there was a four-game preseason schedule, he usually played the first three before sitting out the finale.

Reid said his quarterbacks will be accompanied by their respective line on the depth chart, meaning Mahomes will play with the starting offense before Henne takes over with the backups. Shane Buechele and Dustin Crum will finish things out.

“It's definitely about getting into rhythm. It's getting into the game, seeing how the clock is running — everything in the game speeds up,” Mahomes explained. “So the guys need to think, execute, show off their talent. It's going to be important to be in the game and see how all these guys do.”

As much as Mahomes wants to see how new wide receivers JuJu Smith-Schuster, Marquez Valdes-Scantling and second-round pick Skyy Moore fare on Saturday, most of the attention will be on the revamped defense.

First-round pick Trent McDuffie is expected to start at cornerback along with Justin Reid, who arrived from Houston in free agency. The Chiefs also expect to give plenty of work to another first-round pick, defensive end George Karlaftis, along with rookie defensive backs Joshua Williams, Jaylen Watson and Bryan Cook.

“It's bare-bones football,” Justin Reid said, when asked what to expect when the playbook is condensed and the game plan largely nonexistent. “We know what you're going to do. You know what we're going to do. Let's line up and do it. It's a test of wills. This is about giving guys a chance to show what they got.”

NOTES: DE Frank Clark missed practice with an illness. DB Zayne Anderson (shoulder), WR Greg Jennings and OT Lucas Niang (knee) also remained out. WR Omar Bayless left early when his lower back tightened up. ... TE Jody Fortson returned after hurting his quad earlier in camp. The plan is to slowly get him up to speed. ... Andy Reid said he's looking forward to getting DT Danny Shelton in camp after the Chiefs agreed to a contract with him this week. The 345-pound Shelton has not been added to the official roster yet. “I think we'll get a lot out of him,” Reid said. “He's a big guy. There'll be a lot of him here.”