Chiefs' Mathieu remains in COVID-19 protocol ahead of opener 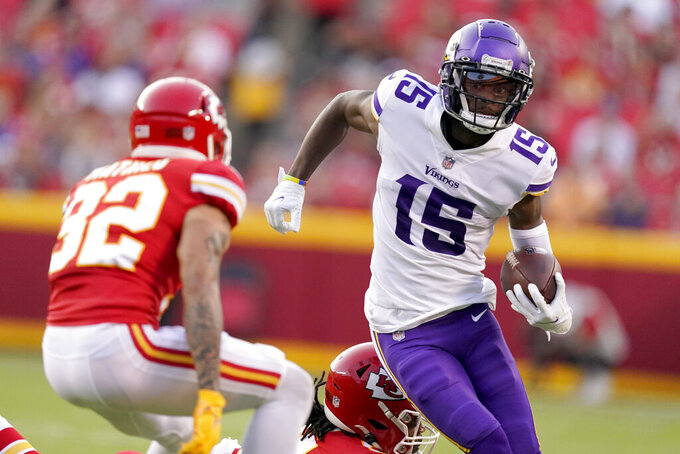 KANSAS CITY, Mo. (AP) — Tyrann Mathieu remained in the COVID-19 protocol on Friday and the Kansas City Chiefs remain uncertain whether their All-Pro safety will be cleared in time for their season opener against the Cleveland Browns.

The Chiefs essentially are preparing two defensive game plans depending on whether Mathieu, who is fully vaccinated, returns the two negative tests 24 hours apart that are required for him to take the field on Sunday.

“Listen, we're going to see how it goes,” Chiefs coach Andy Reid said after their final practice of game week. “The other guys have practiced and are ready to go. If he can't go, he can't go. If he can, he can.”

Mathieu tested positive Sept. 1, giving the Chiefs plenty of time to work other players into the mix. Juan Thornhill is likely the first in line next to Daniel Sorensen in base defense, but the Chiefs also have Armani Watts available on the back end.

Thornhill, a second-round pick in the 2019 draft, had an excellent rookie season before sustaining a knee injury in Week 17 that kept him out of their Super Bowl run. He returned last season but acknowledged over the summer he was never fully healthy, despite starting eight games and appearing in every one during the regular season.

“If Juan has to play, he'll do fine,” Reid said. “He's had a good week of practice, couple weeks of practice here.”

Still, it's almost impossible for any single player to replace Mathieu, who had arguably the best season of his career last year. He picked off a career-high six passes — one in a playoff win over Cleveland — along with making 62 tackles, causing havoc in the offensive backfield and earning his second consecutive All-Pro nod since joining the Chiefs.

Beyond the numbers, Mathieu acts as the quarterback of the defense and is often tasked with getting players lined up.

“Obviously he's one of the better players in this league and we've love to have him out there. Unfortunately we just don't know that yet,” Chiefs linebacker Anthony Hitchens said. “We've just been communicating extra this week from the front to the back. It's going to take more than one guy. It's a team effort.”

The Chiefs already are missing middle linebacker Willie Gay Jr., who landed on injured reserve with a toe injury sustained in their preseason finale. The IR designation means Gay will miss at least the first three games of the season.

One bit of positive news: Defensive end Frank Clark looked good in Friday's practice and should be ready to go. He hurt his hamstring in early August, aggravated it about a week later and did not appear in any preseason games.

“He worked hard and I thought he looked pretty good,” Reid said. “We'll see how it goes with him. He's sure looked good.”

The Chiefs are expecting a sellout crowd at Arrowhead Stadium after the pandemic limited them to 22% of capacity, or about 16,000 fans, throughout last season. But despite President Joe Biden's vaccine mandates this week — and several NFL teams requiring them for fans to attend games — the Chiefs will not require them for their season opener.

In fact, there are very few restrictions in place for Sunday's game.

“We continue to work with the local authorities here,” Chiefs president Mark Donovan said. “We're requiring masks in the indoor spaces, the club level. But the president's announcement last night — we've got a tight window here before the game to make a change happen, but we'll take that into consideration.”

Donovan said it's possible the Chiefs could change their policies before their next home game Sept. 26 against the Chargers, especially given the low vaccination rates in Missouri. As of Friday, only 46% of residents were fully vaccinated.