Chiefs offense bogging down when it deviates from script 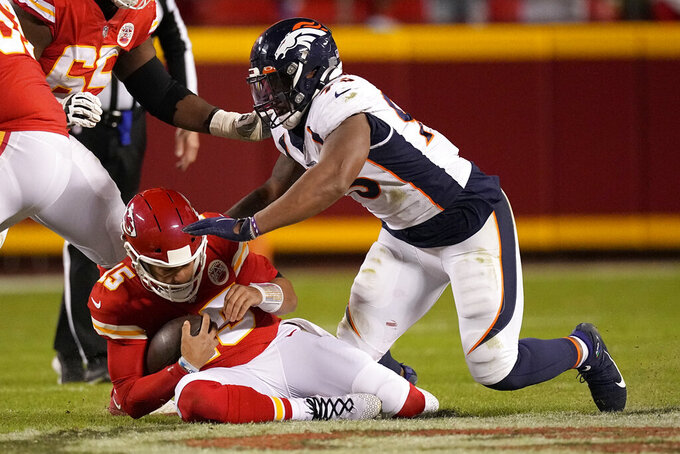 KANSAS CITY, Mo. (AP) — The Kansas City Chiefs have reached the end zone so regularly on their opening offensive possession this season that their opponents might as well stop wasting time and just give them the seven points.

The rest of the game is another matter.

Once the Chiefs are forced to deviate from their opening script — the set of roughly 15 plays that are carefully curated and crafted throughout a week of preparation — things begin to go sideways. Their once-dynamic offense looks more like a wet firecracker, forcing their once-maligned defense to bail them out in a series of nail-biting victories.

The Chiefs (8-4) have still won five in a row to lead the AFC West, but they hardly look like themselves.

Their latest win is a perfect example. The Chiefs drove 72 yards in 12 plays, an average of 6 yards per, and Mahomes capped the drive with a 10-yard touchdown run. The Chiefs ran 42 plays for 195 yards the rest of the game, an average of 4.64 per, and their only other touchdown came on Daniel Sorensen's 75-yard pick-6 in the fourth quarter.

That's not an outlier, either. It's more like a pattern.

During their five-game win streak, the only game they didn't score a touchdown on their opening possession came against the Raiders, when they went three-and-out. But they promptly marched 89 yards in 11 plays for a TD on their next drive.

In their first 12 games, they've scored seven touchdowns and a field goal on their first drives. Two other drives went at least 10 plays before ending in an interception. Only two of their opening possessions resulted in a punt.

The Chiefs have averaged nearly 7 yards per play on their opening drives and 5 1/2 the rest of the game.

“We need to take care of some of these little things that are happening here that are killing drives,” said Chiefs coach Andy Reid, who spent Sunday night lamenting penalties and dropped passes that cost his team against Denver.

“Again, it's my responsibility to make sure that happens," Reid added, “and we'll do that.”

Clyde Edwards-Helaire and Darrel Williams combined to carry 19 times for 74 yards against Denver while catching six passes for 88 yards. That kind of diversity is precisely what Reid seeks of running backs in his offense.

Dropped passes are difficult to track, but the Chiefs are probably among the league leaders in them. Tyreek Hill had a pass bounce off himself for an interception against Denver, the third time that's happened this season, and Byron Pringle and Travis Kelce also had drops on what became a forgettable night for Kansas City's wide receivers.

DE Melvin Ingram had a half-sack and three quarterback hits against Denver. His acquisition from Pittsburgh has revitalized the Kansas City defense, allowing Chris Jones to move to his natural and more productive position at defensive tackle.

Hill and Kelce rarely have poor games at the same time, but they did Sunday night. Hill’s drop was the lowlight of a game in which he caught two passes for 22 yards, and Kelce was little better with three catches for 27 yards.

12 — The Chiefs broke a franchise record for consecutive wins against any opponent with their 12th straight against the Broncos. The Chiefs had also defeated Denver 11 times from 1964-69.

The Chiefs have a one-game lead on the Chargers and two on the Broncos and Raiders heading into their game against Las Vegas on Sunday. They also are tied with the Titans and Ravens in the AFC, though they lost in head-to-head matchups with Tennessee and Baltimore.