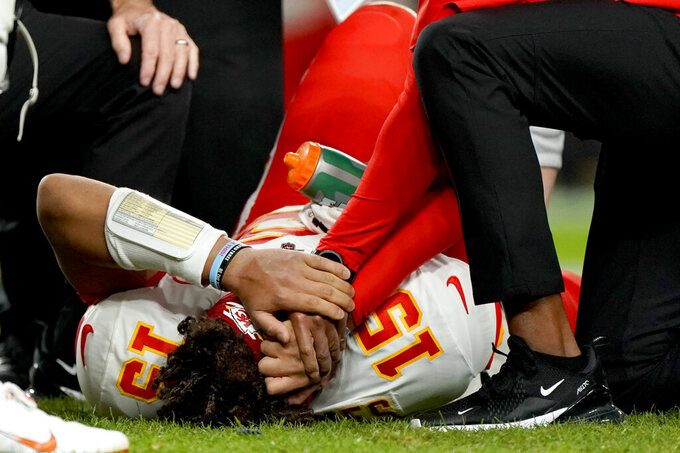 Kansas City Chiefs quarterback Patrick Mahomes (15) is helped by trainers after getting injured against the Denver Broncos during the first half of an NFL football game, Thursday, Oct. 17, 2019, in Denver. (AP Photo/Jack Dempsey)

DENVER (AP) — Now the wait begins to see how long it takes Patrick Mahomes to return from a gruesome right knee injury.

Mahomes, the MVP quarterback of the Kansas City Chiefs, was hurt on a second-quarter sneak in a 30-6 win over the Denver Broncos on Thursday night.

Kansas City coach Andy Reid doesn't yet know how long Mahomes may be sidelined as the Chiefs (5-2) snapped a two-game skid with Moore stepping in and the Chiefs defense stepping up (nine sacks and a defensive score).

Facing fourth-and-short deep in Denver territory, Mahomes picked up a first down by sneaking through the line.

As the pile began to clear, Mahomes didn't jump up.

Struggling to straighten his right knee, he tossed his helmet to the side and covered his face with both hands. His teammates immediately checked on him. Seeing Mahomes' condition, receiver Tyreek Hill put his hands on his helmet in concern — a feeling shared by a legion of Chiefs fans. Mahomes is a big reason why Kansas City was a preseason favorite to reach its second straight AFC championship game.

"You looked at it and were like, 'Oh no, there is something wrong with him,'" Chiefs tight end Travis Kelce said. "You just hope a guy isn't injured that bad and can come back."

One of the members of the Kansas City medical team worked on the knee to help straighten it out. A cart was summoned to take him away, but Mahomes refused to use it.

Instead, he put an arm around each trainer and made his way off the field. Mahomes, who entered the game with a sore ankle, then slowly made his way into the locker room.

Seattle Seahawks quarterback Russell Wilson wrote on his Twitter account: "Praying for you bro." It was a similar sentiment shared by Houston QB Deshaun Watson on social media: "Praying my bro @PatrickMahomes is straight!"

Mahomes has thrown 15 touchdown passes and one interception this season. Last weekend in a loss to Houston, Mahomes recorded his 14th career game with at least three TD passes. That's third-most in team history.

Moore's number was called. Before going in, he tapped Mahomes on the chest and wished him well. When Moore entered the huddle, he had a quick conversation with his teammates.

"Just something to let them know we were going to be all right. Kind of got them fired up a little bit," said Moore, who didn't play last season. "I just said, 'Hey, I need you guys. You guys need me. Let's go here. Help me and let's go.'"

It worked. Moore finished 10 of 19 for 117 yards and a 57-yard TD strike to Hill in the third quarter. Moore also had a grasp of the playbook despite being signed around two months ago after an injury Chad Henne.

After the game, Moore said Mahomes addressed the team in the locker room and praised the defense for a nine-sack performance.

Then, he complimented Moore.

"We're excited for the win, division opponent, road game — all things that are hard to do," Moore added. "At the same, a guy like Patrick gets hurt it can be deflating. He's obviously a huge part of this team, a huge part of the league. You hate to see that. We all know that injuries are part of this game. He's doing to do his best to get back out as quick as he can."