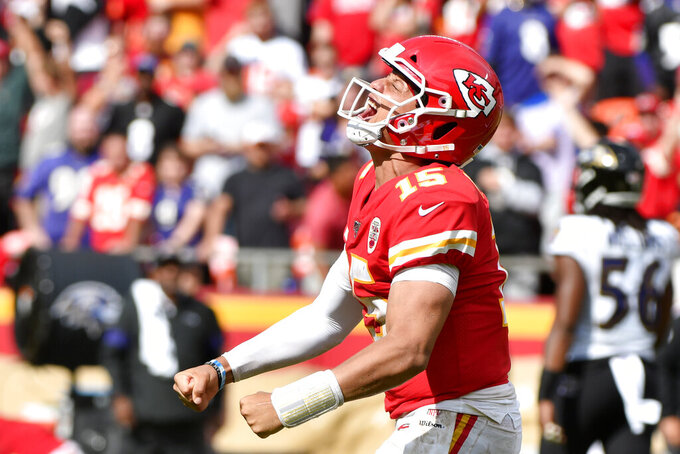 Kansas City Chiefs quarterback Patrick Mahomes (15) celebrates after completing a pass for a first down during the second half of an NFL football game against the Baltimore Ravens in Kansas City, Mo., Sunday, Sept. 22, 2019. (AP Photo/Ed Zurga)

KANSAS CITY, Mo. (AP) — Patrick Mahomes was put on his backside before he had time to blink, a mix-up along his offensive leaving one of the Baltimore Ravens' big defensive linemen with a clear path to the quarterback.

A year ago, Mahomes probably would have picked himself up, made sure all his limbs were still attached, then walked back to the Kansas City Chiefs huddle to call another play.

That wasn't the case at all last Sunday.

No, the record-setting league MVP went right after Austin Reiter, pointing his finger directly at the young center in equal parts instruction and admonishment. It was the kind of move that quarterbacks such as Tom Brady and Aaron Rodgers, who have been in the game long enough to earn a certain measure of gravitas, are likely to make more so than a quarterback only in his second year as a starter.

Mahomes' teammates will say it's nothing new, that he has always been a feisty one. But there is a marked difference in his willingness to put that emotion on display this season.

"He's competitive. He's the leader of that bunch. He's the one that's on the field," Chiefs coach Andy Reid said. "He wants certain things out of a play that as a player, you got to get those things done. That's where my trust in him and the other coaches' trust in him comes in."

That's also why you'll see him giving his offensive linemen an occasional earful.

It isn't just when things have gone sour that the emotion flows, though. Mahomes is usually right in the middle of touchdown celebrations, or pumping his fist after a big play. He's only bringing his own unique energy to the sideline, engendering confidence in everyone around him.

"We hold each other accountable," Mahomes said. "It's not just me saying stuff to those guys. They will say stuff right back to me if I do something wrong."

Mahomes said that is what makes the Kansas City locker room unique. People may point fingers, but it is always with the greater good in mind, and it is always followed by a high-five or a hug.

Egos are checked at the door. Grudges are left to die.

"I think we got the group of guys to play fast and have fun and play through each other," Chiefs wide receiver Sammy Watkins said. "It feels good to go out there and get a win."

Even if it means having Mahomes in your grill?

"We see it all week during practice. I think this is the time where people be like, 'Oh wow!' But all week he goes through practice, tries these hard throws, and he comes into the game and literally he's on point. We just looking like, 'Oh yeah, that's just Pat being Pat.'"

Rarely does a quarterback have the confidence to take on such a leadership role so early in his career. But in the case of Mahomes, the reason it has worked is twofold: He has the undeniable talent to back up whatever he might say to anyone else on the field, and he grew up around professional sports as the son of big league ballplayer Pat Mahomes — meaning any sense of awe went away long ago.

Mahomes also has the kind of magnetic personality, Chiefs tight end Travis Kelce said, that seems to draw everybody in. It's the kind of charisma that allows him to rip into you one play, then put your body on the line to protect his blindside on the very next play.

"Everything's about our quarterback," Robinson said. "He's our head coach when we're on the field, he makes all the calls and we go out and try to execute for him."