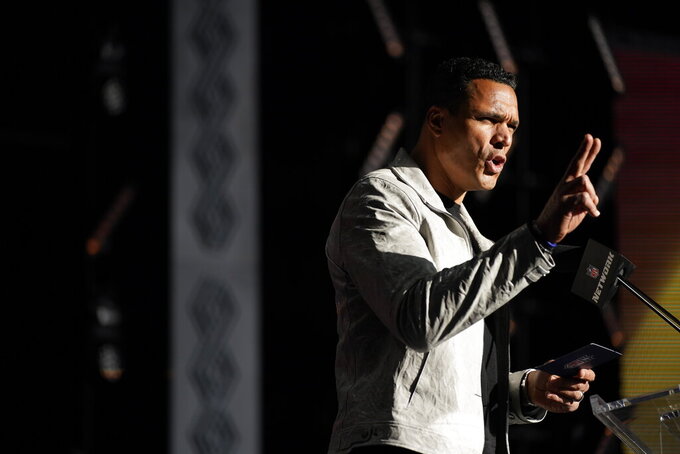 They spent the second night of the NFL draft finding some replacements.

The Chiefs used their late third-round pick to add big, rangy Wisconsin linebacker Leo Chenal, and they have one pick apiece in the fourth and fifth rounds and four more in the seventh before the draft concludes Saturday.

“We're always looking at the value of the board and marrying up the need,” said Mike Borgonzi, the Chiefs' director of football operations. “It fell to us again this year. We were able to fill some needs as well as where they sat on the board. We weren't reaching for these players. We got value for where we were at on the board but filled need as well.”

Each of the Chiefs' first four picks have filled areas of need: three to shore up coordinator Steve Spagnuolo's defense after it struggled mightily down the stretch last season, and an electrifying playmaker for quarterback Patrick Mahomes.

But the target for the the Chiefs was Moore, whose 5-foot-10 frame, 4.41 time in the 40 and burst off the line will remind some of Hill, the three-time All-Pro that Kansas City shipped to Miami for a package of draft picks.

“Tyreek was just a super versatile, super fast game. He was able to bring the speed to that offense,” Moore said. “I really honestly feel like I can come in and bring that same thing and bring my own twist to it.”

The Chiefs have also signed former Steelers wide receiver JuJu Smith-Schuster and former Packers deep threat Marquez Valdes-Scantling in free agency. But the shifty, slippery Moore offers a different dynamic in the wide receiver room, giving quarterback Patrick Mahomes another target who has the ability to make things happen after the catch.

“It's impressive to see what he's done the past three seasons. He had a monster year last year,” Borgonzi said. “The one thing you see with him is he's just dependable, a really smooth route-runner.”

Moore actually played quarterback in high school before moving to wide receiver at Western Michigan, where he became an immediate star. Despite never having played the position, he started 12 of 13 games as a freshman and had 53 catches for 802 yards with three touchdowns, and then improved those numbers each of the next two seasons.

He wound up catching 95 passes for 1,292 yards and 10 touchdowns for the Broncos last season.

“I'm a very versatile, tough, smart and savvy wide receiver. A lot of the traits the fanbase has and the organization has are already instilled in me,” said Moore, the seventh wide receiver taken in the first 22 picks of the second round and the 13th taken in the draft overall. “The Chiefs are the best organization, the best offense to compliment my playing style."

The Chiefs used their other second-round pick on Cook, a hard-hitting safety who rarely misses a tackle and excels against the run, and their third-rounder on Chenal, whose size makes him an intriguing prospect at linebacker.

The Chiefs were among the league's worst last season at pressuring the quarterback, and they weren't particularly good against the run, either. So it made sense that Kansas City would address the defense on the first two days of the draft, first with McDuffie and Karlaftis on Day 1 and then with Cook and Chenal on Day 2.

The Chiefs already have signed former Texans safety Justin Reid in free agency, giving them a replacement for Mathieu in the defensive backfield. And they have Juan Thornhill under contract one more year. That means Cook is likely to help with three-safety sets right away with the chance to supplant Thornhill as the regular starter down the road.

“They’re going to have a phenomenal scheme as well as staff,” Cook said. “I’m just ready to help the Chiefs get those Ws.”