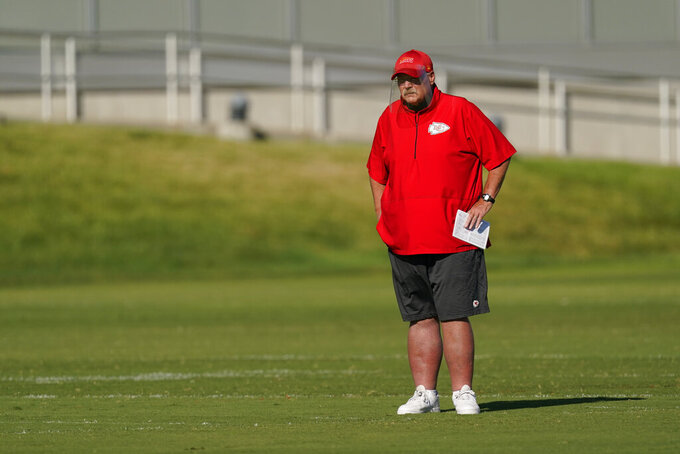 KANSAS CITY, Mo. (AP) — Reports began to filter out late Monday that Chiefs general manager Brett Veach and coach Andy Reid had agreed to six-year contract extensions that would tie them to Kansas City through the 2025 season.

In typical fashion, Reid downplayed the talks Tuesday — he alluded to the fact that nothing had been signed, even if an agreement had been reached.

But he did acknowledge the importance of continuity on the roster, among his coaching staff and within the front office as the Chiefs seek to turn their Super Bowl title last year into the makings of a dynasty.

“There's nothing done with the contract right this minute,” Reid said, "but I mean, if it happens that way, I'd love it. I love Kansas City and the people. Our fans are phenomenal. Ownership is phenomenal. Clark (Hunt) does it the right way.

“We're all willing to work,” Reid continued before heading out to practice. “That's what I don't want to get lost in that talk, that people are willing to work here, and that's so important to the organization. If you're going to be a good organization for more than one year, you have to keep putting it in each year.”

Reid bounced around early in his career as he worked up the rungs of the coaching ladder. But beginning with his work under Mike Holmgren in Green Bay in 1992, he has become known for his loyalty. He remained with the Packers until 1998, when he took over the head job in Philadelphia, and remained with the Eagles through the 2012 season.

Veach has been there every step of the way, starting off in the personnel department and eventually replacing John Dorsey as the GM, choosing whom to draft, whom to sign and whom to let go as he rebuilt the roster in his image.

Reid and Veach aren't the only ones settling into the prospect of long-term stays in Kansas City. The Chiefs have doled out what could amount to more than $600 million in extensions that tie quarterback Patrick Mahomes to the franchise for about a decade, and tied up tight end Travis Kelce and defensive tackle Chris Jones for the foreseeable future.

“Continuity with players and coaches is great. I mean, that's great," Reid said. “But the bottom line is everybody has to work. All the contracts, all the money aside from whomever — it doesn't matter, players or coaches. It's how you handle yourself in the sport. And how you attack it. That's where our primary focus has been throughout this.”

The proof that it works is in the hardware.

In a typical year, the Super Bowl champions would dole out their rings in June. But with the coronavirus pandemic preventing any in-person work, the Chiefs have been forced to push that back into September. But a member of the Hunt Sports Group hinted over the weekend that those diamond-encrusted rings could be arriving this week.

In the case of Reid, it will join the Super Bowl ring that he won as an assistant with the Packers.

NOTES: The Chiefs are finally getting healthy as they point toward their Sept. 10 opener against Houston. The only players missing practice Tuesday were OLs Kelechi Osemele (stiff neck) and Martinas Rankin (knee). ... The Chiefs approached the afternoon workout like a typical Thursday in the season. The reason is that they will be playing on Thursday night, giving them a short week next week.