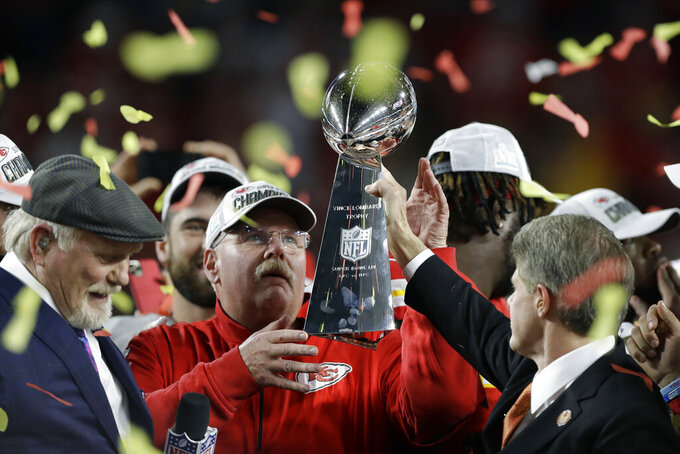 FILE - In this Feb. 2, 2020, file photo, Kansas City Chiefs chairman Clark Hunt, right, hands the trophy to head coach Andy Reid after the chiefs defeated the San Francisco 49ers in the NFL Super Bowl 54 football game in Miami Gardens, Fla. It's hard enough when things are normal — only seven franchises have won back-to-back championships. But it's even more difficult when the offseason has been thrown into turmoil because of the coronavirus pandemic, affecting everything from free agency to the NFL draft to team workouts that should have begun this month, but will not. (AP Photo/Chris O'Meara, File)

KANSAS CITY, Mo. (AP) — Andy Reid is like most people these days. The Kansas City Chiefs coach is hunkered down in his basement, trying to avoid going out in public as he works from a makeshift office consisting of a computer, an iPad and an old side table.

The difference, though: He's trying to build a team that can defend a Super Bowl title.

It's hard enough when things are normal — only seven franchises have won back-to-back championships. But it's even more difficult when the offseason has been thrown into turmoil because of the coronavirus pandemic, affecting everything from free agency to the NFL draft to team workouts that should have begun this month, but will not.

“Well, we stay as current as we can through information from the league,” Reid said on a conference call with local reporters Thursday. “We're approaching it like we're having a season, and I think it's two-fold because it can be a real positive energy giver back to the country at a time of maybe need for that. At the same time, we're very sensitive to what's going on.”

Reid has the same feeling about the upcoming NFL draft, which will take place without fans later this month amid the nationwide lockdown. It could be a pleasant distraction during abnormal times, but it will also take place as many people are dealing with crippling health and financial problems that are far more important.

In the meantime, Reid and Chiefs general manager Brett Veach to keep plugging away on their roster.

With very little room under the salary cap, the Chiefs have been largely quiet in free agency. They signed veteran offensive lineman Mike Remmers to provide depth across the board; brought in journeyman cornerback Antonio Hamilton to compete for a starting role; and signed XFL quarterback Jordan Ta'amu to add another voice in that room.

Along with placing the franchise tag on Pro Bowl defensive tackle Chris Jones, that is just about all the Chiefs have done.

The salary cap is the biggest reason. But the coronavirus is another factor.

With the Chiefs unsure when they will be allowed back in their facility, and the NFL uncertain when or if practices will be allowed this summer, the value of players who already know the system grows exponentially. That is why franchising Jones was a wise move despite the hefty financial hit, and why the Chiefs brought back wide receiver Demarcus Robinson.

“Absolutely. As many guys as you can keep, you'd love to do that,” Reid said. “The other part is Veach has to sit there and juggle the salary cap and do all that. But logic tells you, as many guys as you can keep that are familiar with what you're doing, either side of the ball or special teams-wise, you'd like to do that. But there's a whole lot of variables that go into it, and that's something Brett and his crew, they do all that stuff.”

To be sure, the Chiefs still have plenty of holes on the roster. The most pressing may be at cornerback, where Kendall Fuller signed elsewhere and Bashaud Breeland and Morris Claiborne are still floating around in free agency. But there is also need for help along the defensive line and at running back, where Damien Williams has been prone to injury.

The Chiefs hope they can fill some of those holes through the draft, even though it will take place without the benefit of bringing anybody in for workouts, and with only digital meetings for face-to-face interviews.

“We're making it work,” Reid said. “I'm glad I coached at San Francisco State because we had to work through a lot of things there. It was Division II, non-scholarship. Not everything was easy there. To film practice we had a guy climb up a ladder. We had guys picking up rocks on a dirt field to have practice. Those experiences help when everything isn't quite perfect.”

NOTES: Reid said no decisions have been made when it comes to the massive contract for wide receiver Sammy Watkins this season. The Chiefs' tight salary cap situation means they would like to restructure or extend his deal ... He also punted when asked about progress in signing Jones to a long-term deal. ... The Chiefs are mulling options for conducting the draft. They've discussed having coaches and staff work from their respective homes, along with renting out blocks of adjoining rooms in a Kansas City hotel.