Chiefs' resurgent defense has them back on top of AFC West 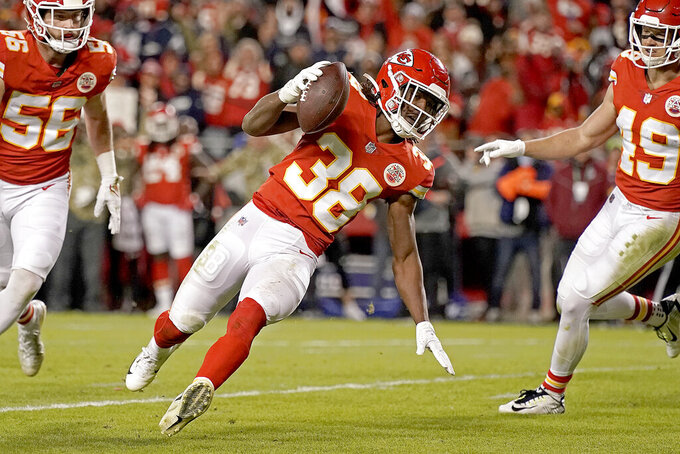 Kansas City Chiefs cornerback L'Jarius Sneed (38) runs the ball after catching an interception late in the second half of an NFL football game against the Dallas Cowboys, Sunday, Nov. 21, 2021, in Kansas City, Mo. The Chiefs won 19-9. (AP Photo/Charlie Riedel)

KANSAS CITY, Mo. (AP) — Patrick Mahomes has been trying to convince everyone that the Kansas City Chiefs' defense has been playing better.

Hard to dispute it now.

What was one of the worst defenses in the NFL — and maybe Chiefs history — the first six weeks of the season showed just how stout it has become on Sunday. Kansas City held the NFL-leading Cowboys' offense to 276 yards, sacked Dak Prescott five times and picked him off twice, and kept Dallas out of the end zone entirely in a 19-9 victory.

“Ever since the second half of the Tennessee game those guys have been playing better,” Mahomes said. “It got lost because the offense wasn't playing well that we were winning games because of the defense. To go up against an offense like that, that's put up so many yards and points, and to shut it down was something else.”

Mahomes was held to 260 yards while throwing an interception and losing a fumble. The Chiefs went 4 of 12 on third downs and managed 370 yards of their own. The running game, even with the return of Clyde Edwards-Helaire from his injury, was frequently bottled up by the Cowboys on a chilly evening at Arrowhead Stadium.

So it was a good thing for AFC West-leading Kansas City (7-4) that the defense showed up again.

Chris Jones had 3 1/2 sacks, forced a fumble and recovered one, continuing his dominance since moving from the edge back to his more natural position at defensive tackle. Frank Clark added a sack and three quarterback hits as he begins to live up to his gaudy contract. Charvarius Ward and L'Jarius Sneed picked off passes, and Sneed had three passes defended, made a tackle for loss, and seemed to be everywhere the Cowboys tried to go Sunday night.

It was a far cry from the defense that gave up at least 430 yards and 30 points in four of the first five games.

“They’ve had to work for this,” Chiefs coach Andy Reid said, "and I think when you have to really work for something and bear down, I think you enjoy it a little bit more and you’re not resting on what happened before, but you’ve earned this right here with the knot in the stomach and the ups and downs. So, you earn every one of these.

The Chiefs' defensive front has been particularly ferocious since the arrival of DE Melvin Ingram, who has allowed Jones to slide back inside. It knocked down Prescott eight times to go with the five sacks. And the secondary produced eight passes defensed along with a pair of interceptions.

The Chiefs need to quit with the stupid penalties. Edwards-Helaire was nailed with taunting for pointing at a defender while scoring; defensive back Rashad Fenton got penalized for taunting after having his helmet ripped off along the Dallas sideline; and offensive lineman Trey Smith was given an unsportsmanlike conduct penalty for jawing at the officials.

Sneed, a fourth-round pick in last year's draft, has become the clear No. 1 cornerback in Kansas City. He shut down a couple of screen passes with physical play and showed that he can win one-on-one battles in man coverage.

Wide receiver Mecole Hardman was only targeted three times with two catches for 25 yards. He had an easy catch bounce off his hands and was unable to use his natural speed to beat Dallas defensive backs in the passing game.

Fenton (knee) and RB Jerick McKinnon (hamstring) are awaiting MRI exams Monday. FS Tyrann Mathieu landed on the injury report about three hours before kickoff after his surgically repaired knee suddenly swelled up Saturday night. But he warmed up with trainer Rick Burkholder and wound up playing the whole game.

The Chiefs finally get their long-awaited bye this week. Then they return to face three straight divisional opponents with the Broncos and Raiders first up at Arrowhead Stadium. It's a streak that should help to decide the AFC West race.