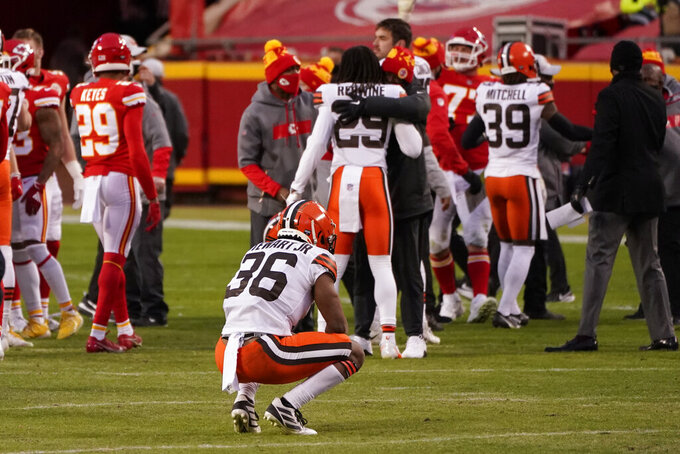 FILE - In this Jan. 17, 2021, file photo, Cleveland Browns cornerback M.J. Stewart Jr. (36) reacts on the field after an NFL divisional playoff football game against the Kansas City Chiefs in Kansas City. The Browns are on their way back to Kansas City's rowdy Arrowhead Stadium, where Cleveland's 2020 season ended with a gut-punching playoff loss and where its 2021 season, one with Super Bowl hopes, starts. (AP Photo/Charlie Riedel, File)

KANSAS CITY, Mo. (AP) — The game the Kansas City Chiefs want to win more than any other happens to be the only one in February.

That doesn't mean they don't like winning in September.

In fact, it has been nearly five years since the two-time defending AFC champions have lost a game in the opening month of the NFL season. It's a remarkable streak of perfection predating quarterback Patrick Mahomes, defensive coordinator Steve Spagnuolo and a multitude of players who hope to usher the Chiefs to a third consecutive Super Bowl.

“We’ve kind of come out, in my time at least, with a lot of really good football teams up early in the season,” Mahomes said, “and we know that if you lose a game in September, it could cost you at the end of the season as far as seeding and trying to get into the playoffs.

"So we just stress the importance of playing really good football at the beginning of the year.”

The Browns, their season-opening opponent Sunday, can put the Chiefs' remarkable September streak in perspective. They have lost an NFL-record 16 straight openers are are 1-20-1 in Week 1 since returning to Cleveland prior to the 1999 season.

Most of those wins by the Chiefs haven't been close, either.

Only five of the 14 in September have been decided by less than a touchdown. And it's not as if the Chiefs have been feasting on their considerable home-field advantage because nine of the wins have come away from Arrowhead Stadium.

"I think we just stress the importance of starting the season fast,” Mahomes said. “We have a very tough training camp, as everyone knows. We really compete and go at it every single day in practice, and I think it prepares us to be ready to go.”

The reason Kansas City has been so dominant before autumn sets in is really quite simple: consistency.

The streak began under quarterback Alex Smith but was soon handed over to Mahomes, his brilliant understudy, and he’s merely gone 10-0 with 32 touchdown passes and no interceptions in September. It helps that he’s had arguably the game’s most dynamic wide receiver (Tyreek Hill) and tight end (Travis Kelce) on the receiving end throughout the streak.

The roster has turned over, but never all at once — just subtle tweaks from year to year. Nor has the coaching staff gone through wholesale changes, with those taking place often constituting promotions from within.

It began with Brad Childress as the offensive coordinator, and he turned the reins over to Matt Nagy, who eventually left for the head coaching job in Chicago. But waiting in the wings all along was Eric Bieniemy, the Chiefs' longtime running back coach, who moved seamlessly into the coordinator role and has kept Kansas City flying high.

“You certainly see (the consistency) with their offense and some of their concepts and schemes that show up,” Browns coach Kevin Stefanski said. “They have an outstanding coaching staff — offense, defense, special teams or you name it. They really are good teachers. I know a bunch of those guys. I know they are really good.”

On defense, Bob Sutton was replaced by Spagnuolo in perhaps the biggest change during the Chiefs' September winning streak. But considering the defense had held the franchise back for years, particularly late in the season, the move to implement an entirely new scheme probably turned out to be a good thing.

Now that Spagnuolo's system has been in place for three years, it's just another mark of consistency.

“Obviously they've been playing extremely well together for a while,” said Browns quarterback Baker Mayfield, whose team lost to Kansas City 22-17 in the divisional round of the playoffs last season.

“They force you to make mistakes,” Mayfield continued. "They're trying to get the ball out of your hands and make you take chances. They do a great job of creating mismatches and trying to get guys free on blitzes.”

That doesn't necessarily mean Mayfield and the rest of the Browns know what the Chiefs will be bringing Sunday.

“You’re going to see what they want to put on tape from preseason games, but you’ve got to go through and trust your eyes, trust your rules, the base fundamentals, and then when you get back to the sideline after seeing a new look, adjust and adapt,” Mayfield said. "Every team’s going to have different schemes, things that you haven’t seen before. That’s the nature of the game, and we have to be prepared to handle it correctly.”

Notes: FS Tyrann Mathieu (COVID-19) still has not returned two negative tests and remained out of practice Thursday. “It's up in the air right now and that's a little bit challenging to game plan for,” Spagnuolo said, “but we have a Plan A and a Plan B. We would handle it no differently than if someone gets hurt in a game. Someone has to step up.” ... Special teams coach Dave Toub said K Harrison Butker has improved his range. “In the right conditions with a strong wind behind us, he could hit a 70-yarder,” Toub said. “In the right conditions, he could do it.”