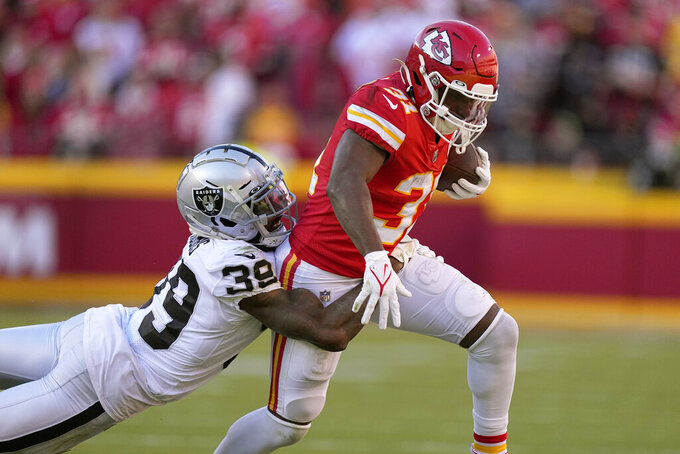 KANSAS CITY, Mo. (AP) — The Las Vegas Raiders were last seen in Kansas City taking a victory lap around Arrowhead Stadium in their team buses, and they decided it was wise to stomp on the Chiefs' logo at midfield shortly before kickoff Sunday.

They probably regret both of those ideas.

Patrick Mahomes threw his first two touchdown passes in nearly a month, Clyde Edwards-Helaire added two more scores on the ground, and the Chiefs' suddenly stingy defense forced five turnovers in rolling to a record-setting 48-9 victory over the Raiders that kept them comfortably atop the AFC West.

“You don't want people coming into your stadium and trying to disrespect things you've built,” Mahomes said. “So for us, there was a little more motivation to go against a really good football team that we have a rivalry against.”

Tyrann Mathieu had an interception and fumble recovery, Mike Hughes forced two fumbles and returned another 23 yards for a touchdown, and the reigning AFC champions built a 35-0 first-half lead before cruising to their sixth consecutive win.

They've won eight of their last nine against the Raiders (6-7), outscoring them 89-23 in two meetings this season.

“I think everybody was clicking,” said Chiefs coach Andy Reid, who improved to 15-3 against the Raiders. “The neat part is we have a chance to be even better. We just have to keep the foot on the pedal as we go."

Reid also joined Marty Schottenheimer and Hank Stram as the only coaches to win 100 games in Kansas City.

Derek Carr had 266 yards passing, much of it going to Hunter Renfrow, who caught 13 of 14 targets for 117 yards and a score. But Renfrow also had one of the Raiders' four fumbles, as did Josh Jacobs, who was held to 24 yards rushing.

“I don't have a lot of words for it,” Raiders coach Rich Bissacia said. “It started with a fumble the first play of the game. As it went on, we missed more and more tackles. We had more dropped passes. Penalties on defense, gave up explosive plays. Struggled to protect the quarterback. Struggled to run the football. And on top of that, missed a PAT.”

Indeed, the Kansas City dominance began with the game's first play, when Jacobs was shoved back about 3 yards and lost the ball in the process. Hughes alertly picked it up and waltzed 23 yards to give the Chiefs a 7-0 lead.

Mahomes capped a five-play, 80-yard drive with a 23-yard pass to Darrel Williams, the first touchdown pass thrown by him since the last of his five in mid-November in Las Vegas. After a quick punt, he marched the Chiefs another 80 yards in seven plays, and Edwards-Helaire scooted into the end zone to make it 21-0.

Then the Chiefs' nominee for the Walter Payton Man of the Year Award got into the act.

Mathieu was there to pick off Carr when his pass slipped through Foster Moreau's hands, and the Chiefs needed a mere nine plays before Mahomes hit Josh Gordon in the end zone. It was the first TD scored by the oft-troubled wide receiver since Sept. 8, 2019, when he caught a pass from Tom Brady for New England in a game against Pittsburgh.

On the next drive, Mathieu was in the right spot when Renfrow coughed up the ball for the Raiders' third turnover of the first half. The Chiefs breezed downfield again and Edwards-Helaire's second TD run made it 35-0, putting the game out of reach before the teams even hit the halftime locker room.

After that, it was a matter of the Chiefs driving home a simple point: Don't disrespect us in our house. The Raiders took a celebratory victory lap in their buses after a win at Kansas City last season, and then there was Sunday's gesture before the game.

“I would have been upset, too, if I was them,” said Raiders linebacker K.J. Wright, adding the pregame huddle at midfield was a spur-of-the-moment idea. “They responded to their anger. We didn't respond when they did that.”

The Chiefs should have had another scoop-and-score by Armani Watts midway through the fourth quarter, when Carr was clocked from behind by Alex Okafor. The ball came loose but the officials whistled that Carr was down. Referee Brad Allen sheepishly reversed the call after a video review, but it still cost Kansas City a touchdown.

Chiefs CB L'Jarius Sneed remained in his hometown of Minden, Louisiana, after his oldest brother was killed in a stabbing Friday night. T'Qarontarion Harris was 32. With both of Sneed's parents in prison, Harris was largely responsible for raising him as a child. Sneed had played more snaps this season than any other Chiefs defensive player.

“He's on my mind a lot,” Mathieu said. “Most of us can relate to that, losing people. We just wanted to play well for him today, for his family. I thought we did that. We started the game with a little L'Jarius energy and we kept that going.”

Raiders: CB Trayvon Mullen was helped off the field in the third quarter. He'd been out since Week 4 with a toe injury.

Chiefs: CB Rashad Fenton (knee) was active but did not play in anticipation of a short week before facing the Chargers.

The Raiders visit the Browns on Saturday. The Chiefs visit Los Angeles on Thursday night.