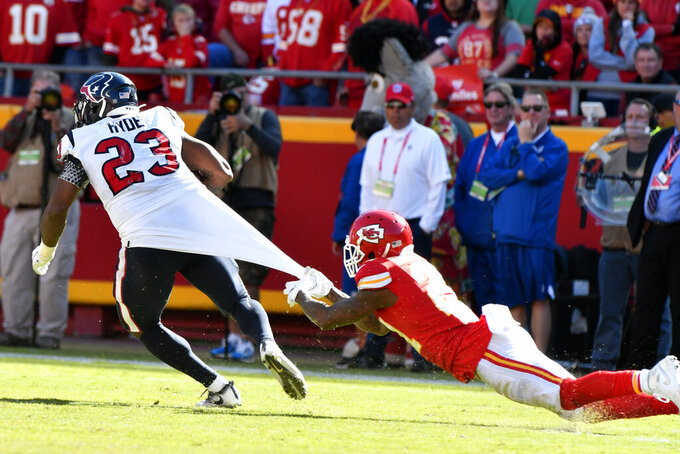 Kansas City Chiefs cornerback Bashaud Breeland (21) hangs on to the jersey of Houston Texans running back Carlos Hyde (23) during the second half of an NFL football game in Kansas City, Mo., Sunday, Oct. 13, 2019. The Houston Texans won 31-24. (AP Photo/Ed Zurga)

No wonder they've lost their last two games, both of them at Arrowhead Stadium.

Injuries have mounted on the Chiefs' defensive line, middle linebacker Anthony Hitchens also is hobbled and coordinator Steve Spagnuolo's switch from a 3-4 system to a 4-3 has failed to produce any noticeable improvement from a defense that has been lousy for most of Andy Reid's tenure.

When it comes to stopping the run, lousy is putting it mildly.

"After six weeks, we haven't been good at it," said defensive end Frank Clark, whom the Chiefs acquired in a trade and signed to a $105 million, five-year extension in part to help stop the run.

"Some running backs are more well-known than others," Clark said, "but we're just making every running back we play look awesome. We haven't really shut down an offense this year and that's something we got to do in order to win. We kept keep putting the pressure on our offense to do everything."

The Chiefs had the ball for a mere 5:25 in the second quarter of their 31-24 loss to Houston on Sunday. They had it for 4:29 in the third and 1:25 in the fourth, which means league MVP Patrick Mahomes was on the field for less than six minutes total in the second half.

A big reason for that is that Houston kept churning the ball on the ground, running for 192 yards to become the fifth straight team with 129 or more. Hyde finished with 116 yards and a touchdown against the team that traded him to Houston in the offseason, when it decided there was no place for him in its own backfield, and became the fourth running back in consecutive weeks to top 100 yards.

It would be 5 for 5 if the Raiders' Josh Jacobs managed just one more yard in Week 2.

"You've got to bow up. That's why we're here and that's why we're professionals," linebacker Darron Lee said. "You got to go out and make a stand, make the plays. Teams are going to try and come here and run so you got to get your mind right."

Along with Hitchens, the Chiefs' defensive front is missing tackles Xavier Williams and Chris Jones. But they struggled even before they went down with injuries, and their backups have been no better.

"We have to fix it. That's what has to take place," Reid said, "and I think there's a lot that goes into it. At times you can sit here and try too hard. It's not an effort thing, it's a maintaining-your-position thing, and we have to do a better job of that, getting ourselves working together, not overcompensating and giving up lanes, and communicating better."

As the Chiefs prepare to visit Denver on Thursday night, when Phillip Lindsay is relishing the chance to look like Terrell Davis, here is one last look at their loss to Houston:

Wide receiver Tyreek Hill had a couple of touchdown catches in his first action since Week 1, when he hurt his collarbone against Jacksonville, and gave the offense an early boost.

Just about everything else. Along with poor rush defense, the pass defense allowed Deshaun Watson to throw for 280 yards on Sunday. On offense, the running game has produced 89 yards combined the past two weeks, and Mahomes has played below par — for him — while hobbled by a sore ankle.

Wide receiver Byron Pringle has played well while getting more snaps with Sammy Watkins sidelined by yet another injury. Defensive back Morris Claiborne also flashed more in his second game back from a four-game suspension, and he could become more helpful at plugging holes the more he plays.

The obvious answer is everyone on defense, but tight end Travis Kelce has had a couple of difficult weeks. He caught four passes for 58 yards against Houston, but he's also had a few drops in back-to-back losses, and the officials have nailed him for some costly penalties.

One of the Chiefs' best cornerbacks, Kendall Fuller, needed X-rays on his hand after hurting it against the Texans. It's the same hand that Fuller hurt late last season, when he was forced to wear a cast during Kansas City's playoff run.

Zero — That's the number of punts the Chiefs forced on Sunday. They did force a trio of turnovers, including a pair of interceptions in the end zone, but it didn't do.

The Chiefs have a short turnaround before visiting the Broncos on Thursday night. They had a walk-through Monday and will practice Tuesday before heading to Denver.