Chiefs' running back battle up in the air as camp continues 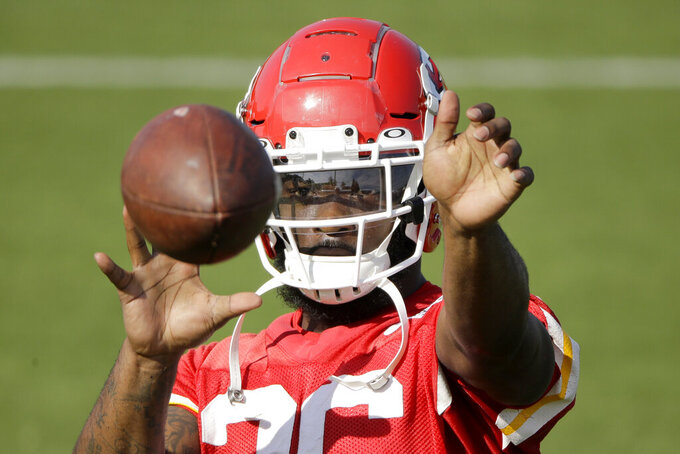 ST. JOSEPH, Mo. (AP) — There was no disputing who the featured running back was for the Kansas City Chiefs when they made the short trip up Interstate 29 for the start of training camp a year ago.

Kareem Hunt was coming off an NFL rushing title and was poised for stardom.

Things are much different these days.

Hunt never finished the season after a video surfaced that showed him pushing and kicking a woman in an Ohio hotel room, an incident that led to his immediate release. Damien Williams wound up finishing the year as the lead back, playing well down the stretch and right through the playoffs, even though he had arrived at camp as an afterthought just trying to make the team.

Williams was expected to be the lead back this year, too. But a hamstring injury has caused him to miss most of camp, throwing the entire position into question with a week left before the Chiefs play the Cincinnati Bengals in their preseason opener at Arrowhead Stadium.

Or be ready when the job is given to them.

In three of the past four seasons, the Chiefs' starter at running back failed to make it through the year — along with Hunt's release, Jamaal Charles and Spencer Ware were lost to serious injuries.

That means finding a feature back is paramount, but so is building depth behind him.

The injury to Williams has increased the number of opportunities for veteran Carlos Hyde, third-year pro Darrel Williams and rookie Darwin Thompson, each trying to carve out a role on the team.

It also led coach Andy Reid to switch speedster Tremon Smith from cornerback to running back this past week. Smith emerged as one of the best kick and punt returners in the league last season, and his ability in all facets of special teams makes him valuable. But he was rarely used at cornerback, so the Chiefs decided to see how he would fare with the ball in his hands on offense.

"Listen, he was the Alabama (3A) Offensive Player of the Year," Reid said, referring to Smith's high school days. "I had messed with him last year that I was going to play with him a little bit on the offensive side. So, I moved him over just to take a peek and see how that goes."

Nevermind that Smith was a cornerback for four seasons at Central Arkansas.

"We just thought that the timing was right," added special teams coach Dave Toub. "We were talking the other day and Andy decided to make the move. He had a good day. If you watched him, he caught the ball well out of the backfield and he looks pretty natural over there."

That ability may be the biggest challenge to identifying workable running backs.

Yes, the Chiefs run the ball when they need to keep a defense honest. But Reid has always valued the screen game in his offense, dating to his days in Philadelphia when Brian Westbrook became a fantasy football darling by catching an obscene number of passes for the Eagles.

Hunt caught 53 passes for 455 yards and three scores during his only full season in Kansas City.

"Honestly, I didn't run too many screens with the other teams I've been on, but I've always wanted to," said Hyde, who spent four years in San Francisco before splitting last season between Cleveland and Jacksonville. "I see here that they run a lot of screens, and screens can pay off."

So can having the ability to change the offense on a whim.

Damien Williams is a shifty, all-purpose back. Hyde and Darrel Williams are 224-pound bruisers who are best between the tackles. Smith is a speedster and Thompson is a 5-foot-8 jitterbug.

Regardless of who ends up the No. 1 running back, all of them bring something to the table.

That makes the running back race one of the most intriguing of camp.

"At the end of the day, we want to put the best players in the best situation to give us the best opportunity to win," Bieniemy said. "We want to compete for a job. Who wants it? Who can improve on the little things we worked on and talked about throughout the offseason?"