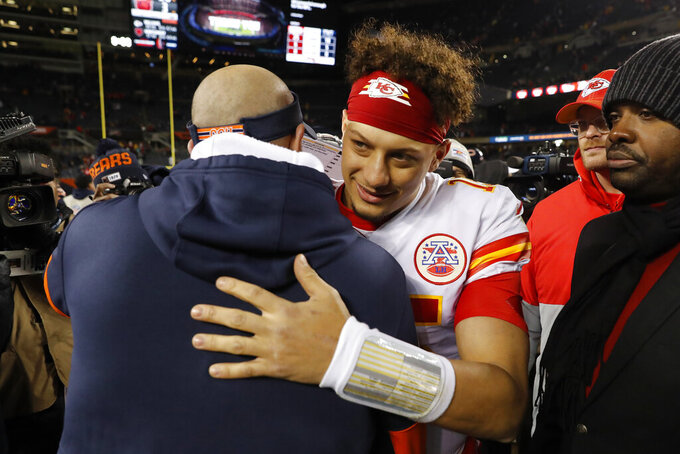 It turns out Andy Reid had a few more lessons for his longtime assistant.

Nagy and Reid watched as Chicago stumbled on offense and Patrick Mahomes accounted for three touchdowns, leading Kansas City to a 26-3 victory that kept the AFC West champions in contention for a first-round playoff bye.

It was the most lopsided loss of Nagy's coaching 31-game coaching career.

The two coaches talked at midfield before the game. Nagy worked under Reid in Philadelphia starting in 2010 and then in Kansas City before taking over the Bears before last season.

"When the whistle blows and your competitive juices get flowing, it's normal just like every other game," Nagy said. "I think it's more so right before the game and you look across and you see everybody you know over there and you see Coach, and then after the game.

“We're both going there to win and you know that his guys are going to be prepared and do well and that's what they did tonight. They're a great football team and they're well-coached.”

Nagy directed Chicago to a 12-4 record and the NFC North title in his first year in charge. But the Bears lost in the first round of the playoffs.

"I'm proud of Matt and the job he's done with this team," Reid said. "It's a process. He is going about it doing it the right way. Unfortunate he's been playing with some injuries and that has cost him a little bit. Other than that, he's doing a nice job.

“I was expecting anything and everything. I figure he would bring it all out and he brought out a few things.”

It wasn't enough. Just like most of Nagy's second season with the Bears.

The offense has struggled near the bottom of the NFL rankings, weighed down by Mitchell Trubisky's inconsistent play at quarterback. The loss to the Chiefs means the best the Bears (7-8) can do is a .500 record.

They finish next week at Minnesota.

"We just didn't play our game today," Trubisky said. “They came to play. We didn't. We got behind early. You just can't play catch-up against a team like that. You can't play sloppy either.”

Trubisky went 18 of 34 for 157 yards, and the Bears matched their season-low point total. They also had three points in their season opener at home.

"You can't accept the fact we scored three points in our first game and our last (home) game," Trubisky said. “It's embarrassing.”

Nagy said the team may have lost its focus.

"I think with focus, if there's not focus then there's some sloppiness," Nagy said. “And I felt that kind of matched up a little bit. None of it's effort. It's different than focus.”

The matchup of Trubisky and Mahomes was a high-profile reminder of a decision by Chicago that likely will follow general manager Ryan Pace for the rest of his career. Pace moved up to take Trubisky second overall in the 2017 draft. Mahomes went to Kansas City with the No. 10 pick, and fellow quarterback Deshaun Watson was selected by Houston at No. 12.

Trubisky did lead one scoring drive Sunday. It resulted in Eddy Pineiro's 46-yard field goal on the final play of the third quarter.

But Chicago's defense couldn't keep up with Mahomes. Already missing several key defensive players, the Bears lost another one when nose tackle Eddie Goldman went out in the first half with a concussion.

Khalil Mack had a sack, but Chicago didn't force a punt until the third quarter. The Bears hurt themselves with six penalties for 40 yards in the first half.