Chiefs' Schwartz has his snap streak end with knee injury 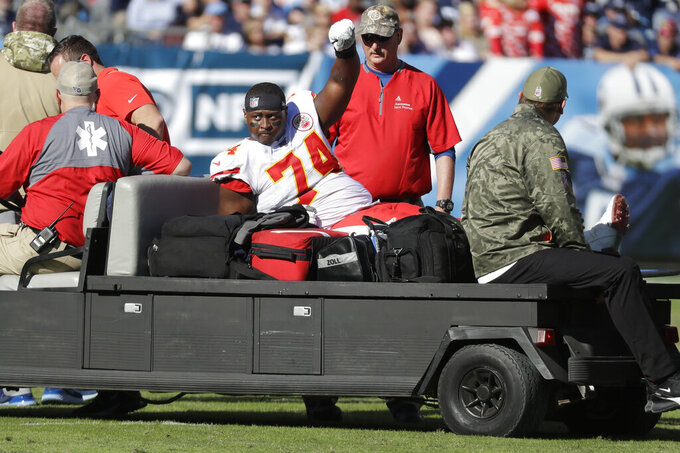 Kansas City Chiefs offensive guard Martinas Rankin is taken off the field after being injured in the first half of an NFL football game against the Tennessee Titans Sunday, Nov. 10, 2019, in Nashville, Tenn. (AP Photo/James Kenney)

The tackle played 7,894 consecutive snaps until late in the first half of Kansas City's 35-32 loss to Tennessee. He hurt a knee with 2:46 left in the second quarter when Patrick Mahomes was sacked by Harold Landry. Since he went down, Schwartz had to leave the field. He tried to walk it off but Martinas Rankin hurt his right knee a play later after sliding over to right tackle.

With the Chiefs facing third-and-9, Schwartz didn't want to risk anything else. The Chiefs settled for a 41-yard field goal. Schwartz was back on the field in the third quarter, but his streak is over and he's not happy.

"It was 7½ years running. It's a pretty cool thing," Schwartz said. "Now I'm just normal like everybody else. It is what it is. You do inventory and make sure there's nothing going in the wrong direction or drastically wrong, and I've been able to avoid that. Like I said, we'll see what the plan is from here."

The Giants had their own woes on the offensive line. They came into their game against the Jets without right tackle Mike Remmers and center Jon Halapio for the first time this season and the problem grew when left tackle Nate Solder sustained a concussion in the first half. He didn't return. New York also lost cornerback Janoris Jenkins to a concussion.

Detroit had its own concussion issues as running back Ty Johnson and right tackle Wagner left the game because of the injury. Green Bay lost cornerback Tremon Smith and linebacker Ty Summers to concussions.

Bears linebacker Danny Trevathan left in the first quarter with an elbow injury. He ran off the field with his arm dangling by his side after it bent awkwardly as he tried to sack Jeff Driskel.

Los Angeles Rams center Brian Allen was carted off to the locker room with a knee injury.

By Teresa M. Walker 33 minutes ago
4 hrs ago
By Greg Beacham 5 hrs ago
6 hrs ago
By Brett Martel 6 hrs ago