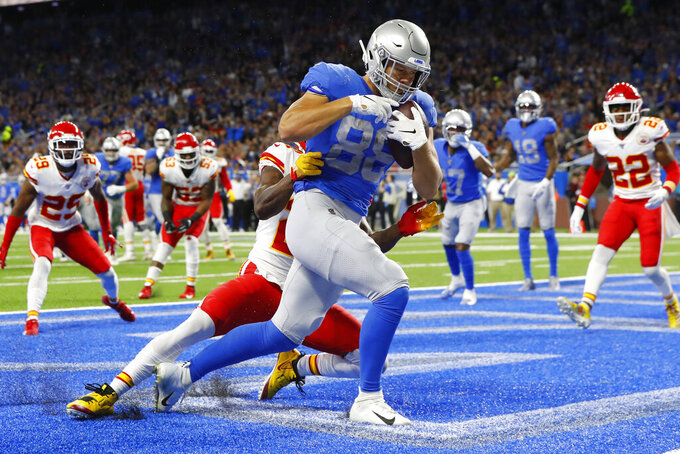 Detroit Lions tight end T.J. Hockenson (88) pulls in a 5-yard pass for a touchdown during the first half of an NFL football game against the Kansas City Chiefs, Sunday, Sept. 29, 2019, in Detroit. (AP Photo/Paul Sancya) 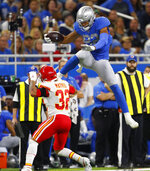 DETROIT (AP) — Patrick Mahomes made more plays than usual with his legs because the Detroit Lions set up their defense to limit what the superstar quarterback could do with his arm.

Mahomes converted a fourth down with a run to extend a game-winning drive that ended with Darrel Williams' 1-yard touchdown run with 23 seconds left for his second score in the fourth quarter, lifting the Kansas City Chiefs to a 34-30 win over the Detroit Lions on Sunday.

"With what they were doing, there were lanes to run," Mahomes said. "I saw a lane and I took it."

The reigning MVP had thrown at least two touchdown passes in 14 straight games, one short of the NFL record set by Peyton Manning. And, he was the first player in league history to have at least 350 yards passing and three touchdowns without an interception in three straight games before getting slowed down in Detroit.

Kansas City (4-0) stayed undefeated after starting its game-winning drive on the 21 with 2:25 left. Facing fourth-and-8 from the Chiefs 34, Mahomes dropped back briefly before busting through a hole up the middle for 15 yards to help him finish with a career-high 56 yards rushing.

"When they start doubling people, there are going to be some lanes and he knew that," coach Andy Reid said.

The Lions (2-1-1) were determined to take away big plays in Kansas City's passing game, doubling tight end Travis Kelce and receiver Sammy Watkins with some success. The scheme, though, cleared space for Mahomes to run and coach Matt Patricia doesn't regret it.

"If he goes back there and throws it vertical with some of the speed that he has, then I'm not going to be happy," he said.

Kansas City went ahead for the first time early in the third quarter when Bashaud Breeland recovered Kerryon Johnson's fumble and returned it 100 yards, taking advantage of everyone on the field appearing to stop momentarily and the officials not blowing a whistle. The pivotal play stood after review.

"We preach that every day," Breeland said. "You pick up the ball at the end, whether it's alive or dead. You never know."

The Lions scored the first 10 points and after Kansas City pulled into two ties, they went back ahead late in the second, third and fourth quarters.

Stafford threw a 6-yard touchdown pass to Kenny Golladay with 2:26 left to give Detroit a 30-27 lead. The call on the field stood after a review, which showed Golladay got both feet in the end zone. Golladay had a touchdown overturned by review early in the third because it was ruled he did not maintain control of the ball throughout the process of the catch.

Stafford was 21 of 34 for 291 yards with three touchdowns, including two to Golladay and one to T.J. Hockenson. Stafford's second touchdown pass of the game — and first to Golladay — put Detroit up 23-20 and followed a fifth fumble in the third quarter.

"There were a bunch of great plays made in this game, a couple bad plays by each team made in this game," Stafford said. "That's the way it goes in the NFL. It came down to the last 15 seconds. They were undefeated coming into this game. So were we. Somebody was going to have to lose

"It was a good opportunity to beat a good team, and we were darn close."

Mahomes opened the fourth with a 10-yard pass to Kelce, who pitched a lateral to LeSean McCoy and he picked up another 23 yards on a play that wasn't planned.

The Chiefs lost three fumbles and Detroit gave it back twice with fumbles in the third quarter, combining for the most fumbles lost in a game since 2014. The Chiefs opened the second half with Mecole Hardman fumbling on the kickoff return. Stafford fumbled on the Kansas City 6 on the ensuing possession and Johnson fumbled into the end zone on Detroit's next drive. Williams and Watkins also lost a fumble in the quarter.

Chiefs: McCoy had a 39-yard run and finished with 56 yards rushing and a TD that pulled Kansas City into a 10-all tie in the second quarter. Kelce had seven receptions for a season-low 85 yards. Watkins had a season-low three receptions for 54 yards.

Lions: Johnson had 26 carries for 125 yards, 1 yard short of his total through three games. Golladay caught five passes for 67 yards and matched a career high with two touchdowns.

Lions: Hockenson (concussion) was carted off the field in the third quarter and S Quandre Diggs (hamstring) left in the first quarter. CB Darius Slay (hamstring) and WR Danny Amendola (chest) were inactive after both were listed as questionable to play.